The Celebrity Hat got its start in a suburb of Saint Louis, Missouri, but didn't achieve true success until the debut at the 2011 Kentucky Derby.

Moments after Celebrity Hat appeared on the scene, admiring comments began to float across the parking lot.

CH was flattered by the instant approval. The attention was nice too, especially since CH knew her Harshest Critic heard all the positive reviews.

But, of course. And your hats are lovely too.

"Can we get in the picture too? We're doing a blog about derby hats. It'll be something like tumblr - derbyhats -dot - com. Did you make this? And look, you matched your outfit, too. We really appreciate your effort."

Once CH was at Churchill Downs, there was such a crush of people avoiding the drizzle that it was hard to move, but in her slow peregrination across the main hall she was stopped at least thirty times. Often by a simple "LOVE your hat," which she soon learned should be greeted with a gracious, "Thank you, and your hat is lovely too." Unless of course the fan was an English gentleman who reminded her of a recent Dr. Who incarnation, who said, "That is simply a lovely hat. Well done!" CH could only muster a giggle and a "Thank you."

There were several types of fans:

Professional photographers, interestingly, never tried to engage the hat, but would just take photos with enormous lenses and then turn away silently. CH felt a little used.

The Dark Side of Fame: Fans Who Want to be Too Close ==

The answer was, "Sure!"  Celebrity Hat was passed among the grandstanders and was tried on by two people, was photographed, and then returned home, a little shaken, but none the worse for wear. After all, drunk people are the most admiring, her brief trip to the infield had taught her that.

With all the fame, the attention, the worship, Celebrity Hat never realized that the bottom was about to drop out.

﻿﻿You may think you know where this story leads. "Ah, CH is caught getting blown .... off a head." No, this fate held true for the hat next to Celebrity Hat, but not CH, as she was strapped on, to cover a double chin, as was compulsively explained to everyone who commented on the wisdom of the ribbon on a windy day.

"So," you say, "CH must have been in the way of the people behind, since she was on the front row." Close, but not quite. CH was not the center of the drama. 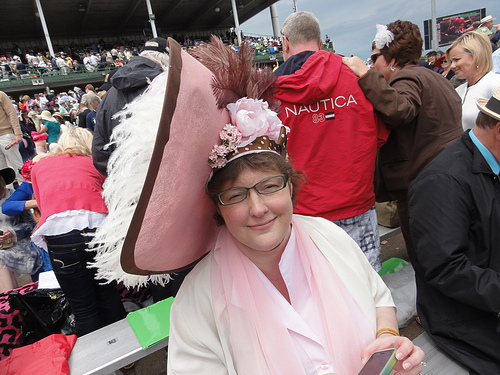 The couple behind CH were the drama. The man in the red Nautica hoodie is married to the woman with the brown jacket, who is one of CH's biggest fans. They also might be a little tipsy.

Right before the horse race (there is also a horse race at this Big Hat Event), everyone stood for the singing of "My Old Kentucky Home." A thirtyish woman, and her daughter a twentyish woman, snuck down to the front and stood on the bleacher seat between the man in the hat next to CH and Tipsy Couple.

Mr. Tipsy would have none of that. "Get back to your seats!" he roared.

"These are our seats. See," the Mom replied, showing her wristband.

"Get back to THE SEATS YOU PAID FOR!" he clarified.

"Why can't we sit right here? No one is on this seat."

Throughout all this Mrs Tipsy is protesting reasonably that the girls should go back because if they let everyone sit wherever they wanted there would be chaos and other arguments in favor of the social contract.

Mr Tipsy shouted, "You aren't SITTING you are STANDING and YOU ARE OBSTRUCTING MY VIEW WITH YOUR BIG HATS."

CH was momentarily self-conscious, but then remembered she was a celebrity.

"What are you going to do? Cut me?" the Mom sneered.

"Then I WILL PUNCH YOU IN YOUR FUCKING FACE."

"IF YOU TOUCH ME I WILL GET THE POLICE SO FUCKING FAST."

Then all I can imagine is Mr. Tipsy reached out and poked Mom Hat with his index finger because she screamed, "He touched me!" Then she hopped off the seat and started to cry. Her daughter stayed put. The race began.

The mother-daughter team were gone by the time the race was over. As one of our seatmates filed out, he asked Mr.Tipsy if it was okay if he walked in front of him. "I wouldn't want to obstruct your view." We all laughed. The Tipsies apologized to everyone.

CH noticed that Louisville seemed to have a tendency for man-on-woman and woman-on-man violence, between the race and the concert the night before.

Celebrity Hat: After the Spotlight Fades =====

The next day, CH spent several hours trying to find one of the dozens of photos people took with her. There are none. She is now a D-list hat. A second banana. A supporting actor. CH had a brief moment in the sun and then it was gone.

Celebrity Hat: a star that shone bright then burned out too soon.

Posted at 12:06 AM in In Which We Mock Ourselves | Permalink

Well she is an awesome hat, but such is the fleeting nature of celebrity. She needs a scrapbook to remember her Glory Day.

I was shocked when surfing the web that I didn't see Celebrity Hat on any of the websites. I'm guessing they didn't want CH to outshine the other hats.

Becs - Yessssss. Just like Marilyn.
Lisa - oh, that is so sad. Old hat, looking at scrapbooks.
Amy in StL - I KNOW! They took photos all over the place!

I just realized that I've been breathlessly following the entire Hat Saga but never said a peep. Now that your magnificent hat is EMBROILED IN SCANDAL, let me say: how lovely!

Elsa - Thank you! That means a lot to Celebrity Hat. She was thinking about getting busted for cocaine, just to get some more attention.