The Stages of Party Food

Back in the day, I would have made a frozen macadamia nut raspberry torte, which would have required hours of work and pricey supplies. I would win high praise, and everyone would ask for the recipe.

Tonight I thought, "I'm done with all that. I am over forty,  I proved myself to my new team at TeddyJ with the Pig Candy. I'm dialing it back. I'm just bringing Rye Bread Dip."

Rye Bread Dip is the go-to easy party food of Saint Louis. It is one step above a bag of Ruffles and Lipton's-French-Onion-Dip.

For countries where there is no rye bread, here is a photo. 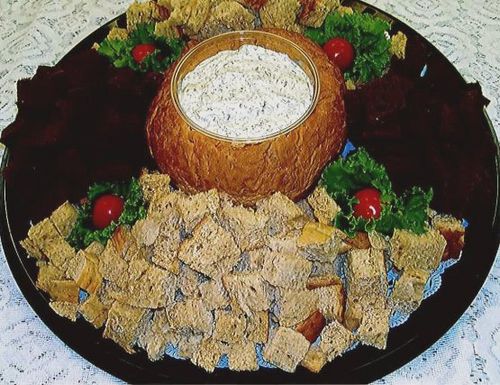 Here is the recipe. Buy Rye bread. Cut a hole for the dip. It comes in a container labelled "Rye Bread Dill Dip." If you want to be all FANCY pour the dip out of the container and into the bread. Usually, I not only cube up the bread from the "hole," but I even go the extra step for my guests and cut a grid into the bread bowl so they can tear off chunks. Oooh. Lala.

Anyway, I was headed right for the grocery with the intent to phone-in the RBD, when I thought, "I could bring a cheese plate. No effort there. And I could make a play on Cheeses / Jesus. I could lay the cheese out in a cross shape. Cheeses on the cross. NO! I could get my three-tiered silver tray, put a printout of a Monty Python God representation at the top, and put the cheeses on the lower tray, and it would be Cheeses Ascending to Heaven.

So, for that I had to drive to the gourmet deli 15 miles away.

And it was closed.

I checked the route to the Whole Foods from where I was. Then I came to my senses and thought, "No! Screw the cheese! Rye Bread Dip, damnit. I'm not cutting anything into cubes. No cheese, no bread, cut your own damn cubes, people."

So I drove back to the grocery, picked up a container of Rye Bread Dill Dip, and ... there was no rye bread. Why? It's a HOLIDAY. That rye was gone on Saturday.

So, hell. Cheeses? No. Not cubing up squat. I got a tray of sliced salami, a box of Triscuits, and a pecan cheese ball. I'm putting it out on a paper plate with a knife. Then I'm resting on my Pig Candy laurels.

Posted at 10:15 PM in In Which We Mock Ourselves | Permalink

Yeah, I gave up all that. I was asked to bring my Famous Key Lime Pie to family do's and it would be ignored. So I stopped.

"Cheeses ascending into heaven" - rofl. I'm definitely stealing this for Ascension Day treats.
I hear you on this. The not-so-wee beastlies are always trying to cajole me into fancy-schmancy treats for something or other - as far as I go anymore is the veggie dip tray, or the bread thing with spinach dip. Deal with it I say....

I appreciate the Cheeses Ascending to Heaven piece very much, and may also steal that.

I think we must have been brain connected last night because I went to Whole Foods for King Cake to bring in and ended up bringing home 5 different cheese.

Becs - Make cupcakes and freeze almost all of them! Frozen cake's always better.
Mare - I say bake some malted milk balls or something into cupcakes and not tell them. Special and a surprise!
Tami - I tried once to bake rye bread and it was inedible. And I follwed the recipe on the King Arthur Rye flour bag.
Amy in StL - That's spooky. Were any of them raw milk cheeses?

Ellen, my first three rye breads were rough. It turns out that rye is a complete bitch.

Tami - And don't they blame the Salem Witch Trials on fungus-infected rye? http://en.wikipedia.org/wiki/Ergot#Effects_on_humans_and_other_mammals