People of the World: the Saint Louis Arch is being spruced up. 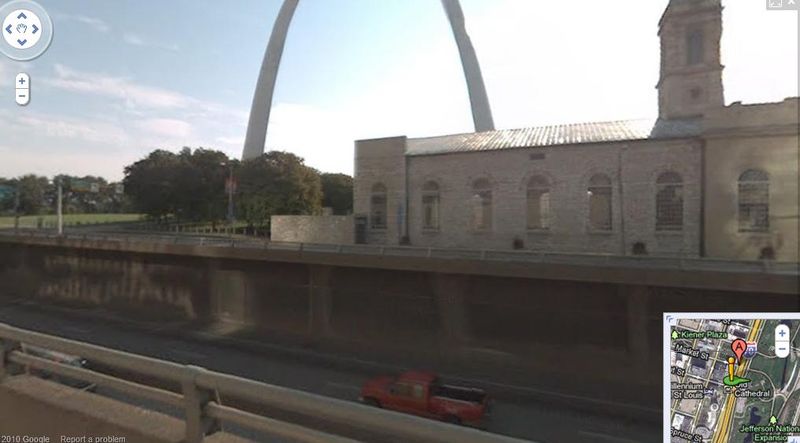 This is the view of the arch from downtown. To walk from downtown to the arch you have to take a hike over Highway 70. They courteously dug the highway under the street you would take to get to the Arch and the Very Old Cathedral above.

(In traffic reports the dug-in section is "the depressed section." Until I drove past the arch at 18, I thought they meant economically depressed, so I assumed they were talking about either North or East Saint Louis.)

So, that red pickup truck is unsightly. Soon we'll be spending millions to make the Arch grounds more sightly. I approve. Here's why: look at the map below.

There's the shiny silver arch on the right. On the left, there's a single-file line of park after plaza after garden. Our two green areas are bisected by the unsightly yellow Highway 70. What they plan to do is put a "cap," which I see as a slice of grass pie, pointing away from the arch, between the red lines, balanced on top of  the depressed section, so we can jog barefoot on the grass for eight blocks and not fall into the red pickup.

(Of course, I still get nervous driving under bridges in South Saint Louis because Aunt Carleen told me they were made of mud. (Sarcasm. I get it now.) So of course I worry that grass pie slice will collapse.)

BUT! The grass pie is not the best part of the plan. There will be ... an aerial skyway of gondolas! Like they used to have at Six Flags over Missouri! Before it crashed!

"Where will it go?" Gary asked.

Look where the skyway goes, from the South leg of the arch to ... 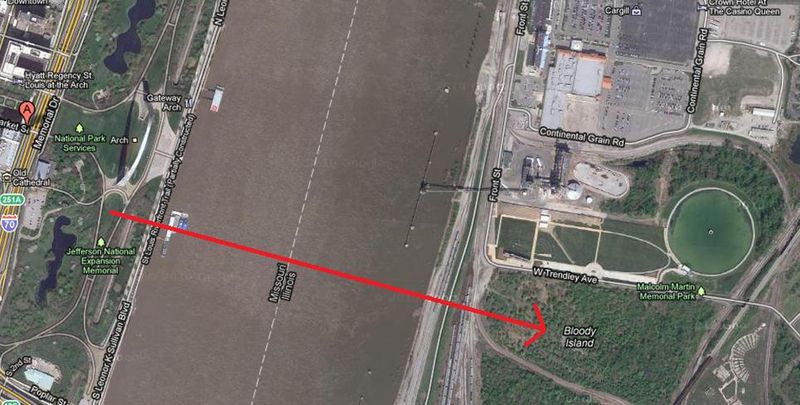 BLOODY ISLAND. Embiggen. I do not lie.

Now, I could be mistaken. If they had printed an artist's rendering in the paper this afternoon I would not have had to imagine this.

I heard about the gondolas on the news and hoped they weren't stringing them over the river. Such a bad idea. I'll never forget Chain of Rocks park had ones when I was little and when people got stuck they had to go get them with lift trucks. How are they going to get them over the river?

Off topic - You were horrified by the story of the woman who kept her dead loved ones near. This one's worse:
http://failblog.org/2011/01/27/epic-fail-photos-probably-bad-news-mummy-making-fail/

Amy_in_StL - The RFT says they're going across the river. http://blogs.riverfronttimes.com/dailyrft/2011/01/arch_gondolas.php
I guess they could keep the gondolas low to the river. I wish I could see a real image of the plan.
Silk - Gaaaah! Damn those Frankenstein movies. Everyone things electricity is the answer.

Becs - yes. The big grey thing running through the middle of the photo is a river. And of course, that will just make the bodies harder to recover after they plummet.

I heard a rumor at the lunch table yesterday that they might be attached to the bridge. Which would be less scenic, but easier and quicker to get approved.

You want them low over the river so that a runaway towboat can clip them during a flood?

I like most of the ideas without the stupid gondolas, but I don't understand where they expect traffic to go or why they took out the underground parking. Plus, that's one hell of a pricetag for what's essentially a slab of concrete and some landscaping.

Amy_in_StL - Oh, that's right. Whenever the river rises boats hit the bridges even without gondolas.
Caroline - I agree about the parking. That's the best, safest parking lot by the arch.

Wait- is this going to drop you next to the "fountain" across the river that is basically one giant spout of water?

Lawgirl - Close to the fountain, as I understand it. Now that you mention it, I can see a high wind condition issue there.