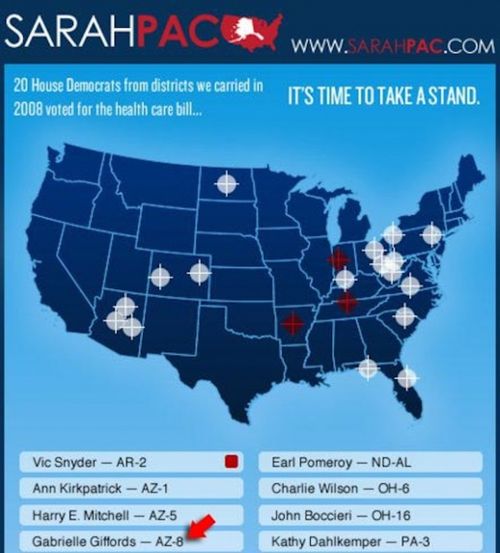 I don't think the shooting was even remotely her fault. But, I would think more of her if I got to see a video of her tearing her hair, or better, banging her head on a table repeatedly, moaning "stupid stupid stupid."

Instead, her camp has decided to say,"Whaaa? Crosshairs? Crazy. Those are the sights from surveyors tools," which is so lame I'm more inclined to believe someone's flying a false flag. The graphic's gone now. When I heard Olbermann say the graphic now has been "scrubbed," I thought he meant they took out the crosshairs but left the circles, then used Paint to make them look like "surveyor's tools."

(I got the general idea of what surveyors tools actually look like from a fine blog post, carefully titled http://freakedoutxenophobes.wordpress.com/2011/01/09/palin-defenders-crosshairs-are-actually-surveyors-tools-excuse-is-total-bullshit/)

Or, they could have done something else. Look at Colorado. 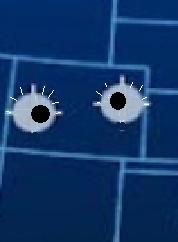 It could have read "LOOK at these crazy congressmen in Colorado! Voting for healthcare!"

Or tiny grizzly bears, not Momma Grizzlies but Deadbeat Dad Grizzlies.Or she could have made them into boobies. Look at Colorado again, it's begging to be boobies. Because that would be in better taste than crosshairs. Stupid, stupid, stupid. Just as stupid as surveyor's tools.

Posted at 12:14 AM in Miscellaneous Mockery | Permalink

We are rather proud of our boobies here in Colorado. They should be on the map!

I'm a Land Surveyor by profession. Sarah Palin is not. I'm not a hunter. If I were using those symbols it would be safe to assume I was implying a surveyors tool. If a hunter uses them, it's safe to assume they imply gun sights. It's all in the context of the persons history with the symbol.

Personally, I'm offended she's trying to hide behind the tools of our trade. For one thing, surveyors don't target people for elimination. We measure and describe. We like to associate ourselves with constructive processes, not destructive ones.

In short, her claim is obvious bullshit...

What about a red cross? I mean it's health care she's talking about - oooo or a bandaid. Or maybe a cad... whatever that snake staff thing is called I'm too lazy to look up the correct spelling and too uptight to misspell it on the interwebs.

Surveyors' symbols. Sure. And by "Don't retreat --- reload," she meant "reload... um, the TRUCK. The truck full of surveying equipment." Persuasive? No.

The simple fact that she and her cronies are backpedaling so hard from this violence-rich symbolism indicates that they understand their share in this tragedy perfectly well.

Trisha - Mile high boobies.
Benchmark - Huh, one of my family ancestors carried the surveying chains for George Washington when he was a surveyor.
Tami - Booooooobies.
Amy_in_StL -Cadecus? I didn't look it up. Looking it up now - oops. Caduceus.
Elsa - Bwah! "The truck full of surveying equipment."

Oh, and in case anyone is tempted to believe this attempt at symbol-switching: Palin herself cheerfully described that symbol as a "'bullseye' icon used to target" seats: http://twitter.com/#!/SarahPalinUSA/status/29677744457

You can carry my chains anytime.

Elsa - I KNOW. She's having her aide refute her with the surveyor's symbols.
Benchmark - Saucy puppy.

Does anyone really believe this guy was spending his time following Palin? Or listening to talk radio?

It doesn't matter what those symbols are. He was (is) crazy. Not carrying out a plan he thought he heard or saw in the media.

Now, back to the boobs.

SouthCityChick (hi!) - No,I don't think he was influenced by Palin, but I would like to hear her heart sank when she realized what had happened. And, boobz.