I noticed a while ago I had picked up some International Dots. (Not to freak out any newcomers, but each of you shows up as a tiny dot in Google Analytics and (on a short-term basis) in the Ligit Visitors Map to the right. It allows me to think of you fondly, as in "Well, Hello Big Dot in B________! How YOU doin' today?")

She's shy, so no one stare at Big Dot in New Zealand. 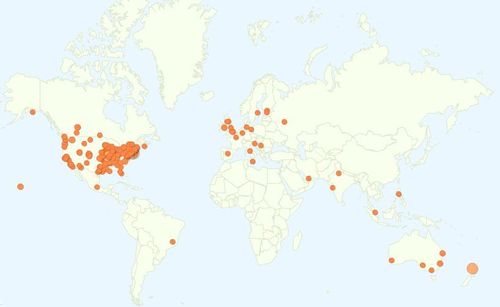 And dont get excited, that's two months worth of visits and it includes people looking for "Spunky Labia" and the flavor of the month, "Hole In Labia." (It is an epidemic, I tell you. Keep an eye out for it.)

I know some dots are random searches, but you can sort by Bounce Rate and visit length and I began to notice that some people were out there in Europe, actually spending whole minutes here.

Someone from Abovyan, Armenia.

And some other person from Agdam, Azerbaijan. And then Aguilares, Argentina!

I noticed a trend. No flies on me! (Just a little American idiom for you folks in the Antilles.)

It made me doubt the validity of the Anchorage, Alaska dot.

There were some dots where the region didn't start with A, but the city did. More A's than one would expect. Like a conspiracy of As.

So, I can only guess that there's some service where you can pick a fake IP from a list? And this person is too lazy to scroll past the A's?

Girlfriend, I'll respect your privacy, but switch to the Zs. It'll make me laugh.

In my defence, the reason I'm such a very big dot is that I do a great deal of sitting - in front of my computer alone here at home, churning out tedious drivel, and I'm both easily distracted and have no self-discipline. It's just too easy to click over and see if anyone else has been visiting the Queen.

And I'm usually first in here because your late-night post is my conscience-free afternoon tea break.

Oh, all right, I have no life.

Does it pick up feed readers? Because I switched to googlereader a while ago. Kept me from checking compulsively looking for updates. Now I just check google reader compulsively for updates.

Big Dot - That's okay, you don't need to make excuses. I'm hypnotized by all kinds of crap.
Erin - Yep, sure does. I just pared MY google reader list down to only blogs that have updated in the last month. Next I need to update the list here.