About two and a half years ago I mentioned in this blog I had done something so stupid at work that I could not blog it. Now I have to blog it because it serves as preface to my most recent stupid work idiocy.

One of my duties at work is to select photo images for our training. I go through our purchased stock of photos and select images of Clients Doing A, and Employees Doing B, and Clients Doing C, etc.. (Yes! I am purposefully vague.)

In one of my first attempts I selected a photo of an African-American employee doing B, and then I needed to find a photo of the same woman in different attire doing D, on a different day. Anddddd... you already know what I did. I tell you I studied those photos; they both looked like the same African-American woman to me. Buuuut ... then my team saw them and asked, who is that woman, that second African-American woman, why didn't you use another photo of the same woman from in the first photo? And I showed them how the hairlines matched, and the eyes, and the ears, and they said, you are on crack, and then I was teased mercilessly.

Thankfully I had also selected a photo of Caucasian Woman Doing A and Caucasian Woman Doing C, and when I discovered that those were again not one but two seperate but similar pretty women, both with white shirts and hair in a ponytail, I sent out a group email proclaiming that I was not a bigot, only a moron, thank you.

So, on to last Friday. I have pretty much been taken off the photo-selection part of my job, so Steve sent me this photo to use. 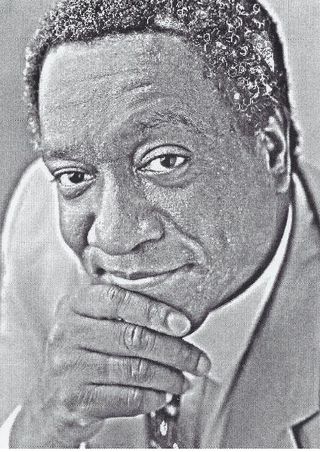 I sent Steve back a courteous message asking why he was sending me an image of Bill Cosby.

"That is not Bill Cosby. Stop it." Steve replied.

I replied with, "Yes, it is," and attached this image. 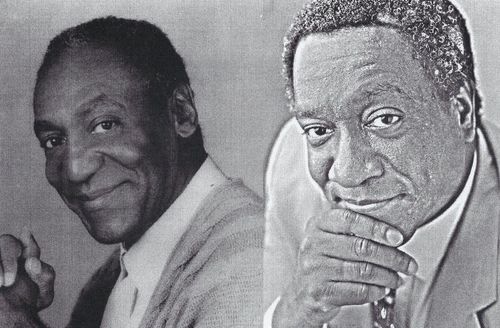 "Look at the eyes and eyebrows and lips. That's a young Bill Cosby. Ask our team leader." I slapped that Send button. Steve is difficult sometimes.

I dragged Gary into it. Gary emailed back that you can tell by the ear, and then I posited this was really an image shot from his other side, and then flipped, so it was a different ear.

Of course, the next Monday, I looked at the photo and it was obviously not Bill Cosby. (Steve had posted the dual photo on his wall so I couldn't help but notice it.)

So today at lunch, I said to Friend 2, "Steve sent me this image, and I think I need to take it to the neurologist, because I was convinced it was Bill Cosby."

Libby swallowed her bite and said, "Oh yeah, we've used that image in our department. People in the testing labs ask us if that's Bill Cosby."

Sweet sweet relief. I tell you. That Friday I'd had my MRI up in the illuminator, studying it to see if I'd had a past lesion that took out my fusiform face area.

Steve is still insisting we use Bill Cosby's doppleganger in our training, but I don't care.  I've warrned them.

Posted at 10:23 PM in In Which We Mock Ourselves | Permalink

On first glance, yeah, dead ringer. After awhile, I saw that the noses were way different.

Look, don't feel bad about racial blindness - it works both ways, you know. We look the same to them too (whoever 'them' may be). I was on a boat in Australia with a big party of Singaporeans and Chinese, the only Caucasian passenger, and I lost count of the time I got asked technical stuff by the other tourists, despite that all the Aussie crew were in uniforms.

It doesn't matter whether it technically is or is not Bill Cosby. What does matter is that is could be confused with Bill Cosby, and that's enough reason not to use it. Why are other people having difficulty with that concept?

It has always annoyed me that eyewitness identification of a criminal suspect is considered so strong. I'm never sure anybody is who I think they might be. I once saw a photo of my own daughter in the newspaper, and they had the wrong name on it. Because it wasn't her.

Totally think that looks like Cosby until a serious study of the features.

That guy is totally Bill Cosby. Until you put Bill Cosby's picture right next to it, and then, not so much.

I do hope this is not an onset of prosopagnosia.

Really good point about the eye witness identification -- if everyone in the world is as bad at faces as I am. Especially in pictures. I love the 'I'm not a bigot, merely a moron' line.

Oy! I didn't think it looked like Cosby *until* I saw the pictures side-by-side, so take that as you will!

I thought it was Bing Crosby.

It may as well be Bill Cosby. Seriously. I was in those usability labs. It was a huge distraction. I bet none of the participants could tell you what the course was about, only that they thought Bill Cosby was in it.

Becs - I think what threw me was that Steve had photoshopped it so it looked like a charcoal drawing, and if you interpret it as a bad drawing of Bill Cosby it could pass.
Big Dot - See, that's the thing about travel, it makes you realize you aren't top cock of the walk everywhere. But you give me a chance to again fearfully reiterate that I ALSO CONFUSED the pretty ponytailed white women.
Silk - That is way messed up.
Tami - I think part of it was Steve's stubbporness that made me so inisitent.
Candy - Prosopagnosia! That's the word I was searching for!
Alison - I am a moron. Or possibly, I'm both.
Elisabeth- Actually, Thursday I saw the picture in color and I didn't think Bill Cosby at all.
Tami - Or someone who does side work as a Bill Cosby impersonator.
3 - Did he sing for Crosby, Stills, Nash and Young?
Caroline - Steve will not budge. I read him all the comments from here and yet his heart had turned to stone.

Oh, and we were saw a presentation today with a photo of Tom Cruise and I did not regognize Tom Cruise.

I am going to take that last comment as an opportunity to share a really stupid thought I had the other day. I could recognize Tom Cruise's daughter Suri easily in a picture. On the other hand, I'm not sure I've ever seen a picture of his equally famous ex Nicole Kidman's daughter ever.

Tom is such a whore.

Has anyone else noticed the wierd shoulder angle of the doppleganger that would be exptremely difficult to acheive in real life? Or that there is a slight crop line behind the ear all the way around the back of the head and behind the line the hair is black and does not have grey? Or that the hands on the chin almost look like they are holding up a mask of some sort?

Can you catch prosopagnosia over the internet? Because I just lost a $50 bet with my husband, over these two guys who I thought were the same man:

And I'm NEVER wrong! (I shall of course be withdrawing the $50 from our joint account.)

Ok, maybe. I'm blaming Larry David - remember The Bare midriff, where he's arrested for excessive napkin use and when he's in the line-up the diner guy can't tell him from a black man because they're both bald?All bald men are alike.

Big Dot -we have two pretty young women with ling straight hair and regular features at work, Julie and Jackie. I call them "Jookie" because I can NOT keep them straight. So it works with pretty blonds too.