« A Moment at the Office | Main | LobSlau '10: or, Death and the Unflinching Looking Upon It »

Step 1: Make a plan for how you will build the chocolate and raspberry pies within pies. 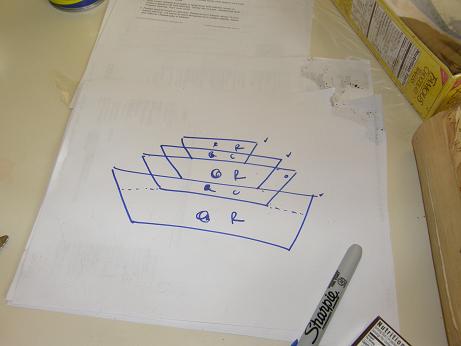 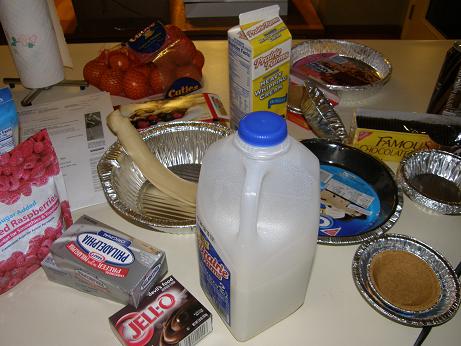 3. Investigate the assembled templates of rounditude and add on a "chocolate pie crust" smaller than 9". 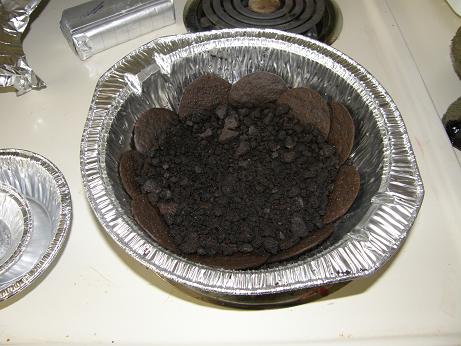 4. All frozen pie recipes call for "One container of Cool Whip." The "would you like 'cream' or 'oil?'" commercials have so turned you against Cool Whip you make your own whipped cream. 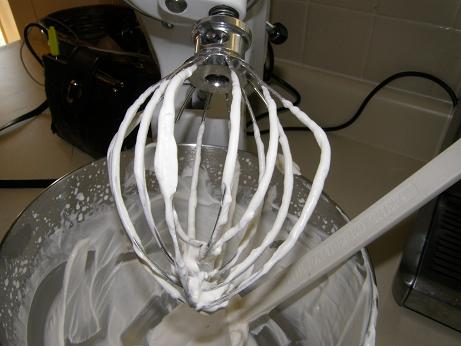 5. Combine half the whipped cream with frozen raspberries and 1 cup of raspberry juice, which you don't have. Add apple juice to the juice from the frozen raspberry package and augment with Chambord. (Hint: Don't remember that this is a frozen dessert and that alcohol doesn't freeze until step 10.) 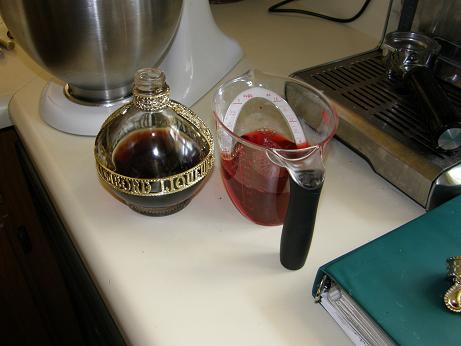 6. Decide your chocolate filling isn't really chocolate enough and look around for something to add. Because all recipes have already been cast off as too restrictive, add this: 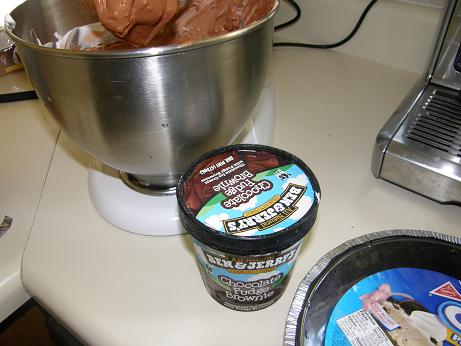 7. Pour raspberry into two of the pies. Realize that will not work according to the plan and remove raspberries: 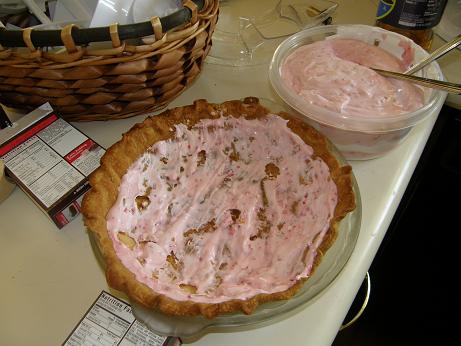 8. Make better plan and vow to stick to it: 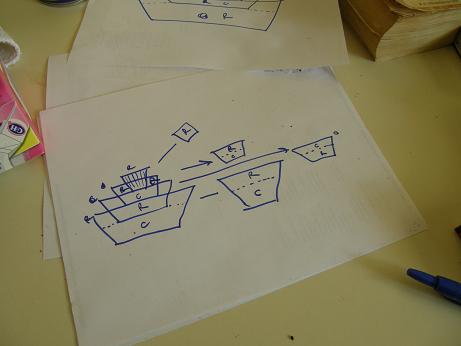 8. Freeze everything for four hours. 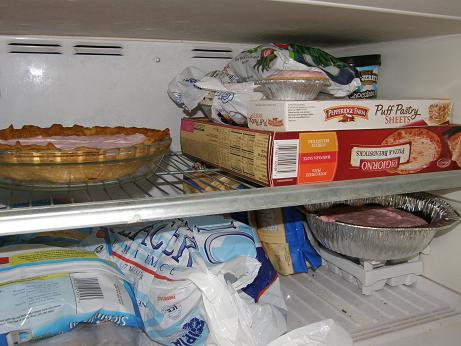 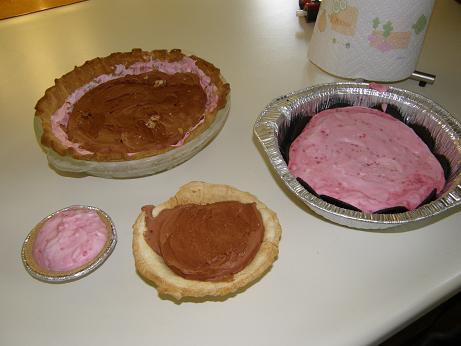 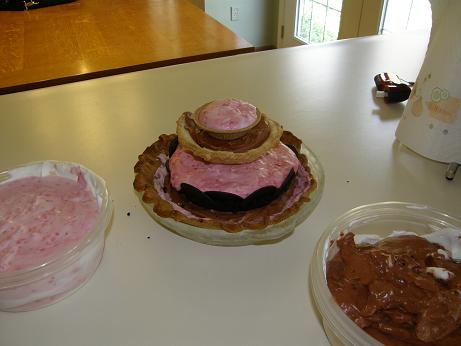 11. Using a pastry bag, immediately pipe the wrong filling into the first pie. Say "Screw the plan" and fill in the gaps with chocolate on the bottom, raspberry on top. 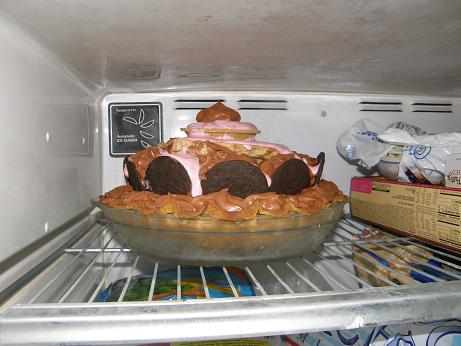 It's freezing right now, along with the pre-bought Oreo crust filled with the extra raspberry filling. I'll update after I've slightly thawed and sliced it.

This would have been much more dramatic if I had followed the plan. 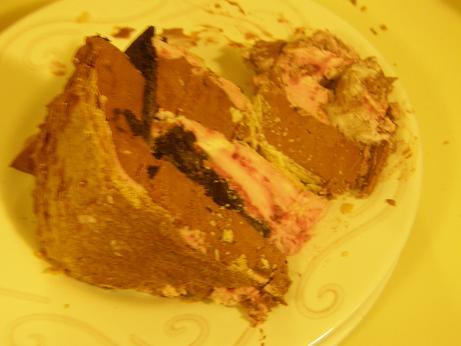 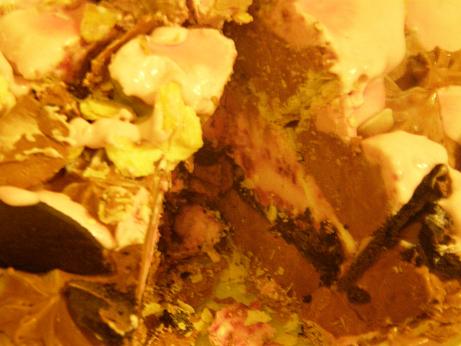 Posted at 04:51 PM in In Which We Mock Ourselves | Permalink

OMG, you're near St Louis, right? If I leave now, I can be there tomorrow. Wait for meeeeeee

I'm a little nervous to discover that you're giving me a partial credit for this er, project. But full marks for perseverance. I'm sitting here on the other side of the world waiting for the climax. It's a bit like the moon landing.

Also, that's a nifty measuring jug, what a clever design.

Shania - We could have used your help. Only one friend finished her slice.
Big Dot - I know. A gift from Mom. If there's no KMart in NZ, look up "Oxo Angled Measuring Cup" on the net.
Hattie - Well, everyone agreed that the real piecrust - chocolate combo was successful, but the raspberry was too icy and tart.

I'm not a fan of raspberry, but everything else was great. I couldn't finish my serving.

What the hell is wrong with you. PIE IS GOOD ENOUGH WITHOUT YOU MAKING IT INTO SOME SORT OF HYBRID MONSTER. Stop it! You're like the Dr. Moreau of desserts!

Also, that's the same measuring cup that I have. I have the 1-cup, 2-cup-4-cup set. They're awesome.

You can play Dr Moreau of Desserts at my house ANY TIME.

Caoline - I don't know. Is that a math joke?
Tami - Well, I have the 2 oz 1, 2, 4 cup set! Where's your 2 oz? Hah! And I can make Frankenpie or MoreauPie or Grapple/Tangelo Pie or anything I want.
velocibadgergirl - Next I'm thinking a cake / cheesecake combo.

Yours came with a 2oz? I feel so ripped off.

Grapple pie sounds great, and I'm totally down with cake/cheesecake combos, but all the pie crust involved in these pie-to-the-eighth desserts make me itchy. I really only like crusts on the outside of things. Eh, Maybe I'm just PMS-ing. Certainly I'm the girl who put white chocolate cream cheese buttercream on the outside of a cheesecake so I could decorate it.

I have the 2oz one of those cups. I used it just yesterday, to make myself a margarita.

The PiePiePiePie is a thing of very great beauty and imagination.

(Yes, Tami, too much crust, that's what I reckon too. That's why the RING system would work so well.)

Cake and cheesecake: now you're talking. How about a carrot cake with a cheesecake insert? Or several, if you want to be fancy. Aim for a flat, bull's-eye effect (ha) rather than a mountain.

We have K-Mart here, and Oxo brand stuff: I think this will be an easy quest.

Tami - Have you ever taken an unbaked piecrust, flattened it out, covered it with sugar and cinnamon and baked it? Gary introduced me to that. No such thing as Too Much Crust.
Magpie - The right tool for the right job. A shotglass with an exact measurement. I'm using mine as a shotglass from now on.
Big Dot - Hm - but what will keep it from disconnecting when it is served? I could dip it in chocolate...

Maybe one piecrust to rule them all?

Big Dot - I like that idea. Give me a month or so.

You make cinnamon toast with pie crust? Huh. You're not making your own crusts, right? So I don't have to worry that you're doing something like adding pounds of sugar to it, do I?

Tami - Hahahaha. I could never make my own crust. I let the Doughboy do it.