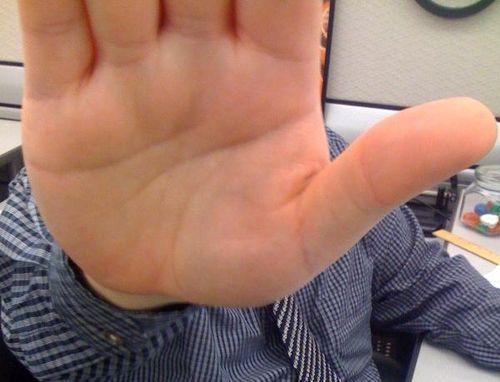 It was like watching Julia Child. He had his ingredients already measured out. 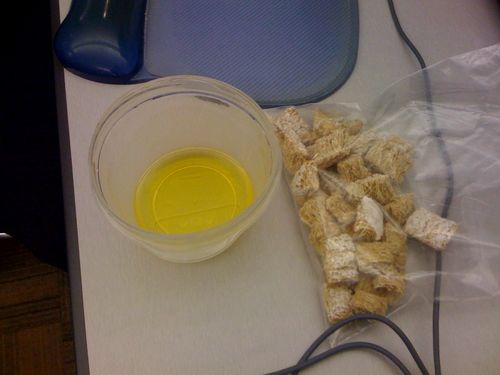 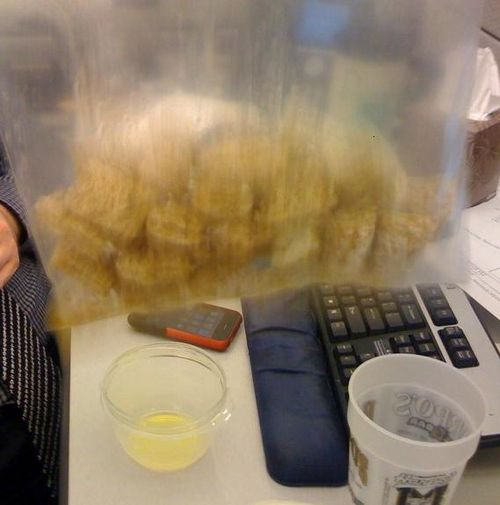 And ate, but he did it behind the hand. I saw it though. 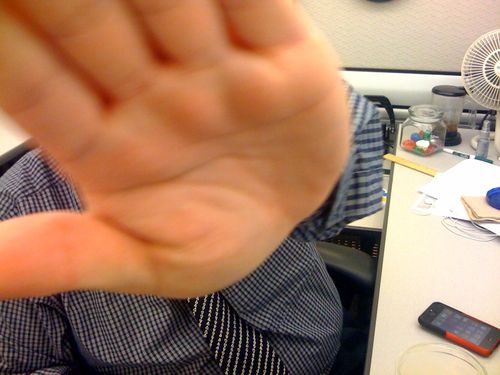 So then I had to have some, and you know, it's hard to believe but it tasted just like ... hmmm ... just like ...frosted mini-wheats coated in olive oil. Picture the old Reese's commercial. "What's your peanut butter doing in my chocolate?" "What's your chocolate doing in my peanut butter?" "Yummm." Only, without the "Yummm" at the end, because shredded wheat and olive oil are not "two great tastes that taste great together." They are 1) one fairly dry taste that would taste great with some MILK, and 2) an oily taste that made me feel like the machinery was leaking at the Kelloggs factory.

But, Steve is unquestionably The Man.

Ew. But at least he followed through.

Yeah, who needs fire-breathing dragons when you've got breakfast cereal and olive oil.

Ewwwwww. Now I've gotta try it just to see how bad it is.

When I was vegan, I'd periodically eat my cereal with orange juice instead of milk. I know that doesn't begin to approach the grossness of shredded wheat coated in olive oil, but it wasn't as great as I thought it'd be either.

Ewww. (That says it all for me. Also, I didn't want to ruin the every-other-comment-is-ewww pattern.)

I once ate Berry-Berry Kix with a Bartles and James wine cooler instead of milk. That actually kicked ass.

Ew, in keeping with the pattern.
The worst of that combination is that they were sugar coated. I'd be more inclined to try it if they were plain.

I read in some NYT food column that Jalepenos and peanut butter make a great combination.
I might try the recipe.

Sorry. I'm more of an oatmeal & Bailey's girl myself.

Of course (speaking for the rest of the world here) (never backward at coming forward, me) we recoil as one at the mere concept of the peanut butter and jelly combination - even AFTER the jelly/Jello misunderstanding is cleared up.

Caroline - He also went around offering it to everyone. Karla might have tried it.
Big Dot - I don't know - have you tasted this stuff?
Shania - Do it and report back!
Kathy - Especially if you brush your teeth before breakfast and that would react with the OJ too. Huh. Do other people brush their teeth after breakfast instead of before? Is that just me?
Wyo - Steve has been told every other comment is 'ewww' and he still insists "It's GOOD."
Tami - Really! They didn't get soggy?
Magpie - Yes. Or coated in salted butter. A butter / sugar / wheat combo sounds palatable.
Hattie - Steve says that sounds good, like Thai food.
Becs - (No Eeew? It had been said.) I had to turn down a brownie soaked in Baileys tonight.
Big Dot - Impossible. What do you eat it with? Bananas? Potato chips? Do you cut the crusts off the PB&J sandwiches and then cut it diagonally, because that is key.

Cutting the crusts off and slicing diagonally (twice) is how you prepare cucumber sandwiches for High Tea, so to treat a PB&J sandwich that way is to do a Pygmalion, with about as much success. Here peanut butter is eaten alone, in a sandwich or on toast, and if it glues a child's tongue to its teeth, so much the better.

And of course you should brush your teeth after breakfast, that's obvious - brushing is for dental hygiene, not cosmetic freshness. Otherwise, you have clean teeth for about 10 minutes and then they're dirty again all day till bedtime. Having said which, my husband does it the wrong way and won't be persuaded, despite 30 years of reasoning (nagging).

He also informed me that I needed to neutralize the color of Sofi's bedroom. Sorry, Circo pink flowers and polka-dots do not match beige.

Big Dot - I am with you. Except, I would say you should serve cucumber sandwiches at cream tea and something heartier at high tea, say, PiePiePiePie, a recent creation based on your suggestion.
3 - That would be like be removing the wallpaper from my guest room!