Yellow! Get Over It, Sulu!

"Do they think we're MORONS?" That's Gary's response every time we see this Quattron Sharp commercial with George Takei.

Then we are required to point to the next yellow thing we see on screen, and gasp "Yellow! HOW DID THAT GET THERE?

The first time, I responded to Gary's "Do they think we're MORONS?" with "Tcha! Like we don't know the difference between the additive and subtractive color systems." 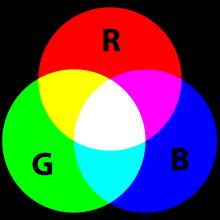 Lookit! Green and red make yellow! The green pixel next to the red pixel beams out yellow. Yellow! You don't need a special yellow pixel, in fact, your yellow pixel is still going to be made from a mix of green and red light.

Okay, now that I typed that up, I'm going to Wikipedia to check that's right.

Okay, even though I originally switched the names, I got it right. But Wikipedia added the one part that's always puzzled me. It's all light, both beamed and reflected, why are the systems different?

"It should be noted that additive color is a result of the way the eye detects color, and is not a property of light. There is a vast difference between yellow light, with a wavelength of approximately 580 nm, and a mixture of red and green light. However, both stimulate our eyes in a similar manner, so we do not detect that difference."

Oh, now I'm off to look up subtractive color and find that OMGOMG this whole RYB primary color thing? SO eighteenth century! 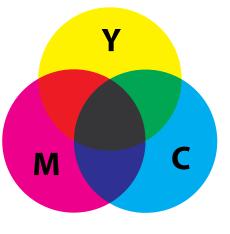 "RGB is the formerly standard..." Whaaa? Are you telling me kids no longer learn Red, Green, Blue, they learn Magenta, Cyan, Yellow? Shut the fuck up!

Update -------------------Okay, it's half an hour later, and Gary has schooled me that there are actually four color systems, something to do with lasers and Wired magazine and mirrors.

Gary has something he wants to say:

"Ellen should do some research before she promotes herself as an expert in front of millions of people. There are a lot of things she doesn't know about emitted light, reflected light, the cones in our eyes, and so on. I have recommended a few articles she can read and make herself more knowledgeable about the subject before she expresses an opinion."

I ask, "But the Smart TV commercial is still stupid, right?"

Posted at 11:38 AM in In Which We Mock Ourselves | Permalink

Did you know a guy in England got beaten to death because another guy didn't like the way he was singing Coldplay's "Yellow."

Dude. Yellow is dangerous. Step away from the yellow.

I live with this day in and day out, because I'm married to a guy getting his masters in Graphic Communications/Printing technologies, which is HUGE on Color Theory and all the various color systems and how colors mix or don't mix, duotones and halftones and yada yada yada.

Also, inks mix along different rules than light mixes, which just adds to the confusion. It makes picking paint colors...interesting.

As for the commercial, The Husband thinks the whole "adding yellow" is kind of a big deal. I just like George Takai making that really gay yell, because I love him and that's fantastic. Anyway, The Husband is the degree guy with 20 years of playing with this color stuff, so I (usually) defer to him. He thinks its cool, I'm willing to go along. We are not getting a new TV.

I don't remember what the other two colors are and I can't ask because the Hubs is in Thesis Writing Quarantine.

Biology? Certainly. Chemistry? Up to a point (Lord Copper). But physics? The door is not only closed, it's locked. Neat closing simile though.

HOW MANY HITS DO YOU GET A DAY ANYWAY?

Oh, just got an explanation about the whole yellow thing from The Hubs which I did not understand but comes down to the relevance of the yellow is dependent on how they TV works (in this case LED) and that the yellow made from the RGB system is not a "pure" yellow, and that some of the yellow is lost (aka some things which would look yellow face-to-face don't look yellow on the TV screen) and a bunch of other stuff I have no clue about.

Like this makes a difference or anything, but I thought I'd tell you anyway.

The Hubs emerged from his locked room of Thesis Writing, so I read him your blog post. I think he's going to come here and say something.

Also, he laughed when I read your blog to him, although I'm not sure why.

I suppose I should comment on this topic as The Wife has refered to me multiple times in this thread.

Here is the skinny on why yellow "might" be a valid addition to the emitted colors of a LED or LCD display. These types of display systems utilize chemistries that generate "good" but not "perfect" red/green/blue light. As such, depending upon the impurities of the light being produced, the gamut of light created can be expanded by adding colors in the difficient areas.

My interpretation of the Sharp design is that their primary color emitters (RGB) have an impurity that prevents the creation of high-chroma in transmitted yellow. I assume that they chose those emitters because they create excellent high-chroma color in blue/green/red. By adding yellow, they are expanding the RGB gamut, thereby allowing richer, more saturated color to be produced.

For information on some expanded and extended RGB gamuts, (not necessarily the ones used by Sharp) you can look here: http://en.wikipedia.org/wiki/XvYCC

I don't know what it says about me but after I got over the really gay yell - which really tickled me - I thought it odd that they picked an Asian to promote adding yellow to their product. I'm hoping it just means I'm the product of two people born in the 1920s.

(Amy, yay! I so wanted to make exactly that comment, but I chickened out. Too yellow, I guess.)

Becs - Coldplay is dangerous. They took BNLs tour manager.
Sherri - I do remember in watercolor class being astonished when we had to mix two colors to get red. And does your husband go on for hours about geek things? With a passion? Does he have a subscription to Wired? Were we separated at birth?
Big Dot - "Objects in blog are smarter than they appear."
Mrs hall - I laughed when he said it too.
Sherri - He was laughing with me, not at me?
John Jacobs - (Hi, and thank you for commenting) So, the yellow I see on a Sharp TV may not be as yellow as the yellow on a Sony, or even as yellow as real-life. Now, this calls for a side by side comparison next time Im at Best Buy. Must remember to bring along a yellow fish.
Amy in StL - I like the gay giggle even more than the yell. And you have cajones to make the yellow remark!
Big Dot - Ha!
Sherri - I have a damaged geek brain. I can never keep Sulu and Chekov straight.

I forgot that Asian people are supposed to be Yellow. Just plain forgot. Sometimes I'm proud of myself.

Also, I don't have the money for a new TV, and am grateful every day that the one I have is very nice to begin with.

If I'm not looking at a better TV right next to mine, I'm usually impressed with it. That's good enough for non-4-color me.

But I love George Takei, so I watch the stupid commercial.

2) Jay (The Husband) does indeed go on about geeky things, but usually in chorus with me. We have deeply analyzed most of the Pixar films and some Godzilla films.

3) The things I learn about color in various contexts always makes me feel like I must have had it wrong up to now. Then I forget about it.

Black skin is black, and brown skin is brown, but yellow? It's always been a puzzle. It's as accurate as white - so, not at all. I wonder how much trouble might have been avoided if north Europeans had bitten the bullet and admitted that they're really pink.

Tami - George Takei is lovable. Oh, if the Tea Party does rise up and undo gay marriage then the Trekkers can rise up and wrestle them to the ground and phase them.
Sherri - Pimpyourblog! It's okay!
Big Dot - We would be pinks, browns, terra cottas, and ... butters.
Sherri - My south asian niece is paler than I am. It all makes no sense.