After all the back and forth about the triglycerides between the doctor's office and the neurologist's office, it seems my general physician has decided I don't need a test right now, I can wait until my regularly scheduled physical in June.

But, till then I should watch what I eat and drink so "we" can get those triglycerides down.

Please, Doctor. Puh-leezee. Do you think my cognitive abilities have declined so much? Do you think I will diet until June? Do you not know it is the Birthday Month?

I was telling Steve at work about my viscous fatty blood, and his problem is he doesn't have enough of the good cholesterol, which he says can be found in olive oil. He deals with his cholesterol problem by drizzling olive oil on everything, particularly: 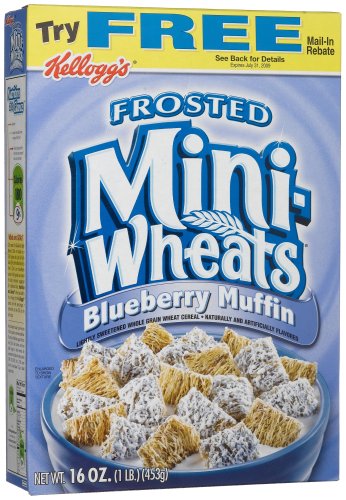 "You LIE," I said, and tried to shake the idea out of my head.

Then he went on to tell me peanut butter, olive oil, banana and American cheese sandwiches were good, too. What will become of me if I start watching my diet? Will I be driven to eat this twisted desperate crap?

buy steve a box of that cereal and a bottle of olive oil and make him eat it in front of you. 'cause i don't believe that he will.

I think Steve misunderstood something. Olive oil is good when substituted for "bad" fats and oils, but I don't think it's a magic potion.

My nutritionist has suggested that I use olive oil on (whole wheat) bread instead of butter or margarine - you see it in Italian restaurants all the time, some people think it's wonderful. Me, not so much. I find it just oily with no flavor. But if it's good on wheat bread, why not on wheat cereal?

Put oil in a dish, add pepper - really *good* pepper. Dip bread in it. Plain oil on bread is weird.

I neglected to mention that olive oil on Mini Wheats is REALLY weird. What the hell's wrong with Steve?

Olive oil has no cholesterol, since cholesterol is found only in animal fat.
Anyway, I love olive oil, but you have to get extra virgin. If you can't taste it, that means something is wrong with your taste buds!

~~Silk -The only place I like the oil on bread is Macaroni grill, where they deep-fry the loaves first in a rolling vat of butter.
Tami- He insists it's good. He claims he's bringing some in tomorrow so "we" can try it.
Hattie - HE CLAIMS he is supposed to get 3 tablespoons of it a day. I didn't even know they sold non-virgin olive oil. Extra-Skanky olive oil.

I remember the bad old days when the only place you could buy olive oil was in the chemist's (drugstore) in silly little bottles.

You had to have a prescription here to buy margarine, too - You Will Eat Butter, by government decree.

I'm trying not to go through food hell on my new diet... I'll keep good thoughts that you stay away from food hell as well. :)

Big Dot - Really! That seems so Socialist!
Sue - Thank you. I think I might try to eat more vegetables when Gary goes on his Communist Diet after his birthday month.