Do My NEW Glasses make me look Fat? 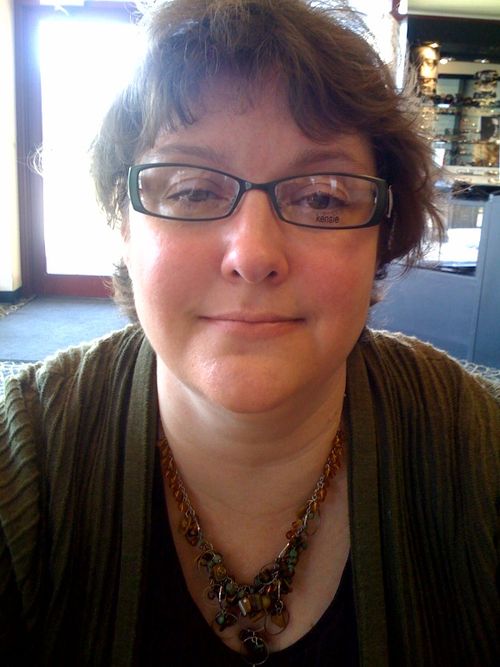 This are my new green glasses. The Hot Assistant took the photo; I was hoping there was a good reflection of her in the glasses but no such luck.

I Make a NEW Taste Friend

I can't count the times CatherineG has mentioned she's had quinoa for lunch. Or, "Kwee-no-na," as I read it, with a midwestern twang. I've seen it in the store. I was never motivated to buy it. I have better butter /salt delivery systems. Grits. Well, now the TeddyJ Cafe serves both grits and quinoa. (Luckily Anne was nearby knew it was pronounced "keen-wa", because I was pointing at it stammering, ""Kwee- Kween ... ")

They've served red quinoa, which is like sprouted or exploded brown rice, then a lemongrass-infused white quinoa. Tasty.

NEW BNL Album Out in Canada

The Barenaked Ladies community is buzzing about "All in Good Time," which released today in Canada, and I think next Tuesday in America. People have been compiling songlists and debunking links to leaks. They've already heard a huge part of the album, the band's been playing the songs on the road. Well, today, people were promised downloads which didn't materialize immediately and they were outraged. I swing the other way. I want to keep away from the songs until I can sit down and listen to them all in order, with the liner notes so I can read along. (And check for typos.)  "LALALALALALALALA" I say. It needs to be a treat. In fact, there are several entire BNL songs I've never heard because they aren't on an album, and while I know just where to get them, I don't want to hear them. I want to save them for later, to raise me out of a coma or something, I don't know why.

3)You mean like they're cover of "McDonald's Girl" or "When Doves Cry"? What about "Trust Me"? Does that count, or does it not count because it's an EP?

Anyway, tell Gary now that he should contact me if you drop into a coma, I've got all this stuff on my iPod.

2) I pronounced it "Kee-noh-Ah" for years before hearing "keen-wah". Boy is my face red!

Tami - Oh, Trust Me is my least favorite of their songs. Yeah, I think the only one I've never heard is Back.
Sherri - She caught me mid-blink. Hopefully I'm more alert usually.
ErinG - Well, they are young and 'sporty.' Sigh.

No, not fat at all. Young and trendy! Myself, still in denial after 30-odd years (read 40), I go for the rimless, no-glasses glasses - but I admire people who dare to be stylish.

That sticker beneath your left eye gives exactly the same effect that I achieve when I attempt to apply mascara, by the way.

I've never even heard of "Back". I am so ashamed. And my least favorite BNL song is "When You Sleep". That song is not for me.

I'm right there with you on hearing the new album all at one time. I guess I must have heard a couple of them last summer when they played them live, but I have not actively sought any of them out online. I'm looking forward to a big sitdownandlisten on Tuesday.
However, these extra-bonus-BNL nuggets that don't appear on albums? those I do seek out.
The new glasses look great!

Hey, you are really cute! And young! Lucky you!

Big Dot - There were no rimless glasses in the shop, I swear to you.
Tami - Thats the one with "Your fontanelle pulses" and I always thing of it as the "frenulum" song, only of course that's "Theres a Name For That" off the snacktime album.
Kristie - Maybe Steven will put "Yes Yes Yes" on a new CD, or "She's on Time." Well, not "She's on Time," nothing goofy, only Art.
Hattie -Just a flattering photo. 47 and getting older. I like your photo on your page. I can't tell your age at all.