A few weeks ago the work team was talking.

"I think you are all aware that I am going to hell," Steve announced.

We all nodded our heads, because we know Steve. (You know Steve as He Who Still Has Not Manned up and eaten shredded wheat and olive oil in front of me.)

He went on, "I hear Terry has given up bacon for Lent." (Terry is Marcia's boss.) "I think that calls for an All-Bacon Food Day some time before Easter."

Consensus was that this was an excellent idea, plans were made, I KEPT A SECRET from all of you and now today was Food Day. (Really, I thought somehow the information could leak from New York, LA, and the Southern Hemisphere back to Marcia's boss Terry.) 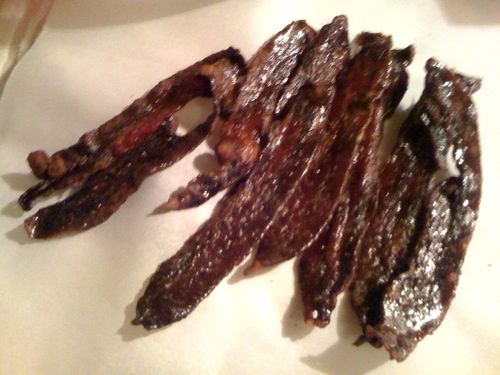 Technically, it isnt just bacon, it's Pig Candy. I liked the concept of brown-sugar glazed bacon, but I cut back a bit on the cayenne. I tried a bite as soon as it was cool enough to eat. Interesting. At first bite it's crunchy and sugary but then you are eating sugar-coated candy with a chewy BACON GREASE center and then you grunt and moan and have some more.

"RIDICULOUS" is how it was described by one person at the office. She just stomped around and pointed at the bacon in her hand and hissed, "THIS IS RIDICULOUS. How did you make this?"

"Well, you cover bacon with two inches of brown sug ... " I remembered she's given up sweets for Lent.

She hissed and pointed at ME. I took it as a warning.

Christ and His Mother protected Terry, who was out of the office for most of the day today, but he appreciated the attempt to corrupt him. I suppose I can make him some Pig Candy to try after Easter. You should find an excuse to make this, too. It's good.  (grunts)

Nah, not tempted: I'm still not able to eat an American breakfast without painstakingly separating the hotcakes and syrup from the bacon and eggs. That's main course and pudding right there on the same plate. Bacon is SAVOURY.

Does this early posting mean that you're heading off to bed at a sensible hour? I'm back to reading it with my afternoon cup of tea!

This weblog is being featured on Five Star Friday!
http://www.schmutzie.com/fivestarfriday/2010/3/26/five-star-fridays-big-fat-edition-96.html

Big Dot - That means you've never had bacon or sausage when the maple syrup gets on it. That is SAD.
Magpie - Bacon! Make!
Schmutzie - I am so proud of the Pie of Sauron now I can't tell you.
RockyCat - Go get some bacon!