« Festive! | Main | Spunky Got all Diva and Demanded to Do a Year-End Wrapup Meme »

I Which I Expose My Booze

My liquor is stored in a wine rack on the top shelf of my pantry. At times the number of bottles exceeds the slots and the Baileys must sit next to the cereal, which bothers me. (Mom said Technical Father would breakfast on popcorn with beer poured on it like cereal. Or (it occurs to me) perhaps I misunderstood "He had popcorn and beer for breakfast." Is the popcorn-cereal combo common?)

So when the booze invades the food I must do something, and that means purging. I wish to GOD alcohol would expire. (If you are telling me to dump anything older than a year, I will tell you Mom kept an open bottle of scotch for about at least 20 years.) Instead I dumped what was in these bottles: 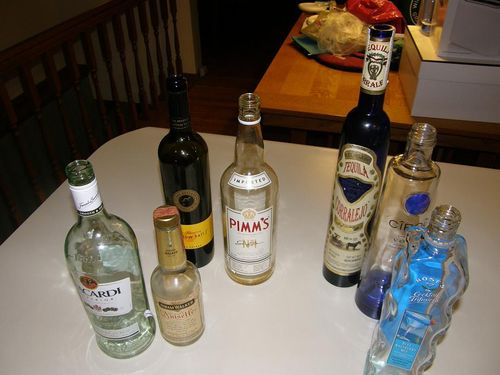 From right to left: Curvy bottle was some nasty blueberry stuff, which I bought when people were coming over for martinis. The Ciroc was almost empty, as was the tequila. I bought the Pimms for a tea years ago and never touched it, and it was just taking up too much real estate. The Yellowtail bottle was completely empty, which means the muslim children drank it or else it dripped onto the rest of the pantry. The Ansiette is the last of the Inheritance Liquor, but it tastes like licorice, and short of alcohol that tastes like Ipecac I can't think of anything more nauseous. And, the reason I went left to right, the Bacardi was a full bottle duplicate of another full bottle.

I felt a little bad pouring the full bottle of Bacardi (it's rum, right?) down the sink, but then I realized how much alcohol would be going down the sink in other homes on 01/01/10, and I felt better.

This is what I'm left with. This is too much liquor, isn't it? It's mostly visitor liquor. That's why Mom kept the Usher scotch in the top left corner for years: in case someone came by "in a state" and needed "a nip."

Some of it is cooking liquor (Sake and Mirin and Port) but most of it is just because there's been some crazy cocktail I wanted to make. I'm really just supposed to have gin, bourbon, scotch, vodka, whiskey, right? 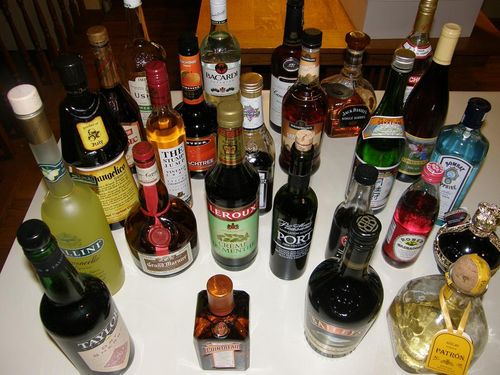 Posted at 12:08 PM in In Which We Mock Ourselves | Permalink

I thought it scandalous that you would dump a full bottle of Bacardi... but then I saw what you kept and it restored my faith in you...

I'll be right over.

I think most people, if they drink at all, have a similar cupboard of all sorts of weirdness, plus the 2 or 3 things they drink regularly. LOVE the idea of friends coming over "in a state"!

I have a bottle of Harvey's Bristol Creme that has to be close to 30 years in my possession. Occasionally, I'll sautee some mushrooms and splash in a little sherry.

Years ago, I finally ditched a bottle of rye (wtf?) that had traveled with me in college.

I have tiny bottles of whiskey that I bought in Ireland 11 years ago.

Oh! Don't be too scared about the liquor invading the food. When I was in Ireland, the husband of one of the B&B owners told me to try Bailey's in oatmeal. It's fabulous.

I've got some liqueur miniatures that have got to be pushing 30 years now. I don't learn - there's a bottle of Pisco I bought in Peru in '08 and the box it's in is still unopened.

But port just for cooking? What a scandalous waste, woman! I never add it to a dish without having a good swig from the bottle and thinking I should drink it more often. Back in my hunting days, at the meet beforehand they would sometimes serve glasses of port and brandy (mixed) - now that was a drink that would have you jumping six-foot hedges. Without the horse! (ha ha)

The (ha ha) was meant to indicate that that was an exaggeration for humorous effect. In case you didn't realise. (Ha ha)

Your liqour assortment is well-appointed. Sadly, all I have is some suspicious Romanian white wine (a gift...) which I can't bring myself to drink because it's the color of aspargus pee, and a cheap bottle of champagne. Suppose someone stops by my place "in a state"? I am woefully unprepared!

We need to dring that...

Trust me, you're not an alcoholic.

I'm 2 minutes away. I could've picked up that duplicate bottle of Bailey's as fast as you were able to dump it. Tsk tsk tsk.

I just noticed that your most popular search is now LUSH SPUNKY LABIA. Most excellent.

@Queen - what is Caroline supposed to put on her oatmeal tomorrow morning if you dumped out her Baileys?

Leprrkan - Thank you for being forgiving.
Elsa - Looking at it all spread out does make me want to know what each tastes like mixed with Orange Diet-Rite.
Gaoo - One of Mom's friends, Carleen, is the only one I can picture ever being in a state. She did not drink. Still, it could have happened.
Becs - Oh, that does sound good. That's breakfast next Sunday.
Big Dot - Never heard of Pisco, had to Wikipedia it: "Its flavor is very smooth and almost non-alcoholic, which can be very deceptive, with the result that many first-time drinkers often drink to excess and can quickly become inebriated without noticing." This has my name all over it. And did you also pick up real absinthe in your travels?
Erin G - Yes! You never know what may happen, especially with theater types.
Hot Mom - Yes! Dring up!
Judith -Evidently Bacardi rum is shunned among hard liquor snobs. I didn't know this until I googled "essential liquor cabinet."
3- I know. I got a zero. Oh, hey, if you spend the $20 to calibrate it you can have my old breathalyzer
Caroline - Points off for Reading Comprehension! Boo.
Becs - Yep, I caught Caroline's slip even before you did.

You know that all of us would have come over and rescued that alcohol from you!

.75 - I don't know. You couldnt have a made a dent. And right now Im tempted to buy apple brandy and Marsala for pork roast recipes.