Mysteries of the House

"Make sure you set the thermostat in an unoccupied house high enough so the pipes don't freeze. because if they DO then they BURST and there will be a FLOOD."

So when I checked out Mom's house last night and found I had neglected this fall to turn on the heat, I turned on all the faucets. Nothing came out the kitchen faucet or the master bath. White sediment and water belched out of the hall bath. The washing machine in the center of the house was fine. So some of the pipes must be frozen.

Mom's house is on a slab foundation, so I am very vague on where these pipes actually are. In my mind there is a big pipe directly under the center of the house buried in the cement to which all other pipes connect. I know that's not how it is, it can't be, but the house wears its sidewalk like a tight collar, so the pipes can't be on the outside at all. They have to be in the wall, but I know mom had pipes replaced yet the paneling was never touched. It's magic. It's a mystery. (It's like the "middle rack" in my oven. I have four racks. "Place casserole on middle oven rack."  I don't have five racks. If I had five I'd have a middle rack. Hate that.)

Here's another mystery for you homeowners. Right now tell me where the water shutoff is in your house. "Somewhere in the basement" does not count. You must picture it in your mind's eye. Hah! You don't know, do you? I don't know where mine is, either. Worse, I realized tonight I don't know where Mom's is. I realized that right after I realized I'd left the heat on at Mom's last night, and in between those two realizations I realized frozen water is solid, while warm water is liquid and pouring out of my Mom's no doubt burst plumbing.

Gary offered to come along and help out with the flood. (This was brave, given that last night we found a fat tiny mouse. He died in his sleep on his belly with all his legs splayed out like the DaVinci guy. I saw him first, and gaped in horror until Gary came by and screamed like a woman.)

We came in through the garage and found the "turny-thing" (valve?) and were filled with hope. There was no sound of rushing water, and this valve even had 4-inch letters indicating which direction was ON and OFF. (Lefty-loosey righty-tighty, I say.)

This was a red herring. Inside the house, where there was no flood and even one sink that had healed itself, Gary poked around looking for the main water line.

Was it in my old bedroom? 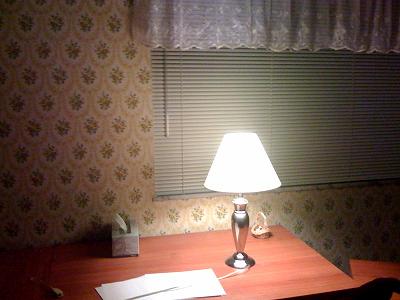 Nope. It was in the laundry room. How did we know? 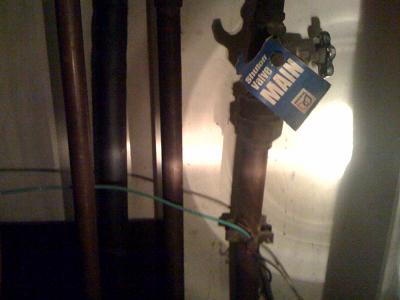 There's a label! "SHUTDOWN VALVE MAIN" Seriously, I am going to spend next weekend tagging every valve in my house. The plumber's coming to Mom's tomorrow and if he says he put that tag there I'll kiss him.

Posted at 12:33 AM in In Which We Mock Ourselves | Permalink

Mine is at the curb...but we don't have basements in Texas, so I am sure that we do every dadgum thing different.

You won't be kissing him on his main valve, I hope?

Sorry, that was one of the first things I learned about my house. Of course, it helped that the guy who used to own it lives right across the street...

Yet another reason I married my husband. He knows these things. If he drops dead, I'm screwed.

Mine is in the laundry room too, or at least where the laundry room was before we moved it. But I only know because I had to turn it on and off (a million times) while we put valves on the sink and toilet lines.

I know where my gas valve is too, although I can't turn it on/off without a wrench because it's really tight.

Are you holding on to your mom's house until the market goes back up or what is the plan?

I know where the shut off valve is at my parents house; but I assume mine is in my laundry room. I know my sinks and my toilet each have their own.

What is it with you and wallpaper?

About 4 feet below the window in the basement on the end with the washing machine.

A tip learned from hard experience: TEST IT. Don't find out the night that your toilet won't stop that not only does the toilet shutoff not work, but the main shut off valve only kind of sort of works. It's $250 to replace and could save you thousands. Also, shut it off whenever you go out of town. You're welcome.

When I used to train at the water call center, I taught all my trainees lefty-loosey-righty-tighty. It's appalling how many adults don't know that.

In a final weird coincidence, we found a dead mole in our garage this weekend. He apparently scurried inside in when the door was open only to meet his death on our frozen concrete floor. I'd feel worse for him if I hadn't come *thisclose* to stepping on his stiff body with my bare feet.

I know where my turnoff valve is and my cat killed five rats last week. He ate parts of them and left the rest around for us to admire. Good cat!

Jessica Fantastica -We have one at the curb and one in the house. The curb one is hard to get to and you need special pliers. I bet you have one in your house too. Look for a tag!
Big Dot - No, in fact he said he didnt put it there. Hm. It looked fairly new, and Mom couldnt have reached it to hang it there.
Becs - Well, sounds like you are hesitant to have the pipes freeze on you, Southern girl.
Magpie - Same here, though I think that would be easiest problem to fix.
Erin - That is exactly the plan, because the taxes and insurance arent too much.
Amy in StL - You should find it. Because it is cold here in StL.
Becs - I lay in bed and analyzed that paper. I was not a fan growing up. But it's held up better than paint.
Caroline - Ugh. Moles are damn ugly. Did you let Rebecca see it?
Hattie - I've never had a cat that ate any animals, and Mac the dog chases animals for sport, not with any intent to catch them.