Remember last year: my quest to bake a perfect a decent an edible babka? Eventually I gave up. But then, CatherineG gave out delicious chocolate babkas as Christmas gifts. Impudent!

I met with the other goddesses hanging out on Mt. Olympus and explained the situation.

"Make her into a spider!" Athena screamed, before I even finished. (Annoying girl; she gives everyone a headache.)

"I can't just make her a spider, that wouldn't fit. It worked when you did it to Arachne, because she was a weaver like you. I'd have to make her into some insect that bakes."

"Make her into the Candida albicans bacteria," Artemis suggested, "That's the bug that causes yeast infections."

An awkward silence. Finally Demeter said, "Artemis, you are such a bitch."

Athena agreed. "You need to get laid, girl. Thats what you should have done with Adonis when he mocked your skill, instead of turning him into a deer."

Artemis snapped, "You must humble these mortals when they challenge you!"

I don't want to be like Artemis, so I will not turn CatherineG into CandidaA. Instead, I decided to hone my babka skills. And to steal her recipe.

Here are the words in this recipe that are the key to the babka puzzle: "Roll out 1 piece of dough on a WELL-FLOURED surface." At that point, what you are trying to roll out is essentially egg pudding. You have to incorporate flour in there somehow.  My surface was extraordinarily well-floured, and what I came up with was this: 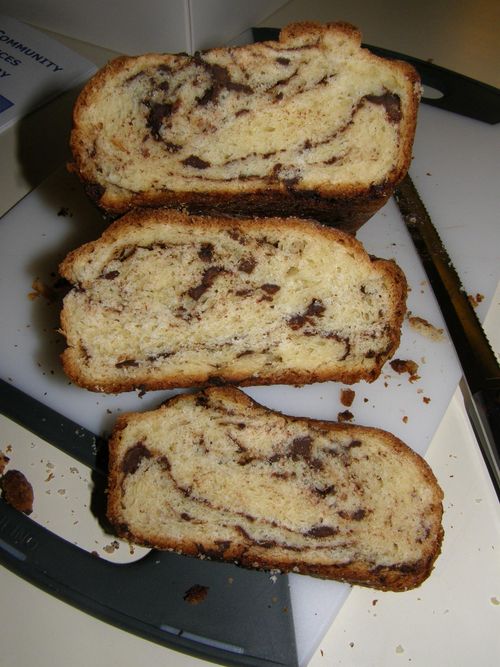 Granted, the second rise was not what I would have hoped for, but I have swirls!

Posted at 11:47 PM in In Which We Mock Ourselves | Permalink

This arouses my passion for baked goods.

Want to know my ancient Chinese secret? I had a feeling that rolling the dough out on a well-floured surface would compromise the structural integrity of the babkas (too much flour = dense bread!), so I...drum roll...

...rolled them out between two long pieces of parchment paper.

It worked like a hot little charm! Not only did I spare myself a giant flour explosion everywhere, the dough spread nicely between the parchment paper sheets and I was able to re-use the same two sheets for all ten babkas. (I still can't believe I made ten in one sitting, BTW.) I reckon using two silicone cookie sheet liners (like Silpats) would have the same effect.

I am a GENIUS.

Further genius that will blow your mind - spray Pam on the silicone liners, first.

But mmm, what a way to go. No wonder Jerry Seinfeld mugged that old lady for one.

Hattie - Do it! We can have a Babka-off
Catherine - But still, then you have to twist it into a double-figure-8. I guess I could leave it on the counter and flop one end over twice. Well, theres next weekend.
Tami - Wouldnt that be overkill / or wouldn't the Pam slide right off the silpat?
Big Dot -Well, duh! How do you make pastry in NZ without butter etc.?

But this is bread! Isn't it?

The Pam does not slide right off the silpat, but mine are kind of very old and used at this point. Perhaps I should buy 2 new ones of those.

Most recipes assume that, if you're trying to bake a babka, you understand that any surface you expect to remove your dough from should be well-floured before you lay the dough down.

Big Dot - In the same way that croissants are bread - yes, they are bread-based and they use yeast, but there's some element that takes them from bread to pastry. Iturnas always to wikipedia: "Pastry is distinguished from bread by having a higher fat content, which contributes to a flaky or crumbly texture."
Tami - I'm going with parchment paper because it can be used to line bread pans too.
Hot Mom - Hm - I'm thinking one recipe did say "lightly-floured." Plus, without a picture that's subject to interpretation.

Oh, I have parchment paper; I baked 40 gingerbread cookies on parchment paper last night. I line all cake pans with parchment, but I started rolling dough out with silicone sometime last year, and I am never going back. Never! You can't make me!

Of course, I've also baked non-loaf-shaped breads on the silicone, too. Maybe I'm just a rebel.

Tami - that cliches it. Going to Williams Sonoma this weekend to buy vanilla and silpats and parchment paper.

Dollars to donuts, parchment paper would be cheaper at the grocery store in the baking aisle. Also, don't get hung up on the name "Silpat", Exopats are also awesome. I got two of them as a gift, and I am grateful.

Tami - Maybe they have silpats at the grocery. I hate going to more than one store. It's never worth the money and time to me.