Tim and Spunky and Susan and Me and Elsa

I suspect that any public figure's marriage is exponentially harder than the same marriage would be in private. Have you ever done that thing, that stupid stupid thing where you say or do something indiscreet to or in front of a friend (or oh god forbid an in-law) to indicate a perhaps-passing irritation or annoyance with your partner? And then the friend (or oh god forbid in-law) repeats it in front of your partner? And then everybody feels terrible except for the friend (or oh god forbid in-law)? (So, by "everybody," I guess I mean "everybody in your marriage.") And the friend (oogfi-l) stubbornly refuses to forget the stupid thing you mentioned stupidly because you're stupid, and instead keeps an eye out for any sign of said annoyances recurring? I suspect that for public figures, this happens all the time, except that the friend (oogfi-l) is, y'know, everybody watching "Access Hollywood" and reading "Gawker."

One member of Spunky's entourage, Gary, often threatens that his family will find this blog. Spunky will not regret this. However, Spunky realized that in recent memory there WAS one regrettable thing she said that might help her sympathize. Spunky bought a winter scarf ... 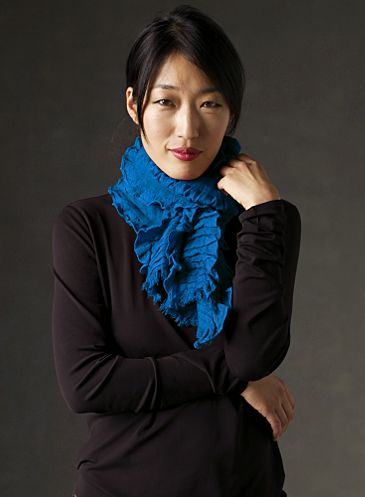 ...hoping it would make her look thin and asian. It did not, but it was the red version, perhaps that  was the problem. Spunky was taken aback for a moment by the price of the scarf: $118. She bought it anyway, because she would wear it every day for months and it would be essentially a dollar a day she wanted it.  (Spunky says shut up.)

This is where Spunky made her mistake: she did not respect her own privacy and she mentioned what the scarf cost to a friend. Let's call that friend The General Public.

The General Public was greatly taken aback by the price of the scarf. Buying a scarf for $118 isn't a Tiger Woods level of stupidity, but it is pretty stupid. Understandably, The General Public will not stop talking about it. It is horrifying excess, it is hard to understand, and it is interesting. Kind of like Tiger. And no, it isn't really any of The General Public's business, but who limits his or her conversation just to that?

So, Spunky regrets being so foolish, and she will work on her wicked ways, and she might retire from golf, but you know,the only way Spunky knows to control the situation right now is to come clean about the full story. (Call Larry King. Scarf! $118! Thats' the full story.)

Posted at 12:17 PM in In Which We Mock Ourselves | Permalink

Oy, oh my. This is an honor, even if a dubious one.

A benign example: I have a back injury that leaves me in chronic pain. Because my in-laws don't want to pain me, they ask of everything "Will that bother your back?"

I've been trying to curtail their discussion of it, if only because the subject bores me silly. The last straw was some months ago, when Little Niece asked me to come play with her, then a shadow crossed her brow. "Oh," she said, "but it might hurt your back."

I told her, and I am telling her family, "Let me worry about that. You don't need to worry about my back. Now let's play!"

Elsa - Good for you. I think "hurt your back" is their way of saying "we love you." Or how people say "lets me know if there anything I can do" after a funeral. They might not really mean it. OR maybe you need to mess with them and say "My back only hurts me when someone mentions it."

When I say "let me know if there is anything I can do" after a funeral, I mean it. I happily took people up on the offer for Mom's.

So, Ellen, when I offered. I meant it. It isn't my fault you didn't have the balls to send me off on some odd errand thatn you just didn't feel like dealing with.

Hot Mom- I was thinking specifically of the owner of our old place, when Mom broke her arm. Susand offered, I said "Make a casserole" and she backed down. And you all saved the family quilt! You were very helpful.