My neuropsychiatrist appointment was at 2:00 today. Usually I listen to Get in Line on the way there; this time I forgot. This is what we call foreshadowing.

Saint Johns MERCY! Medical Center is undergoing renovations, so I had to come in the back way. And so, it was a hunt to find my usual parking garage, the Ballas garage (with a star, below): 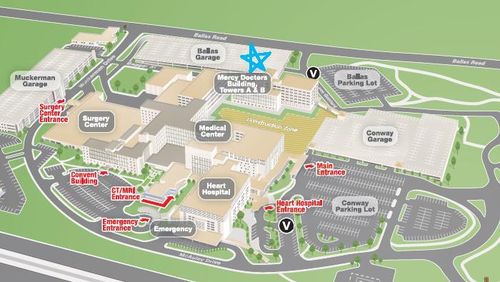 And I thought, wow, there's a lot of renovation going on. I've never taken an overhead walkway to get to the doctor. They must have just built this. Of course, and I will say this upfront because you have already figured it out; there isn't a lot of architectural variety in parking garages and of course I was in the wrong one. I was in the one with the overhead walkway. See it below? Sure. It seems obvious now. You, all smug with your bird's eye view. 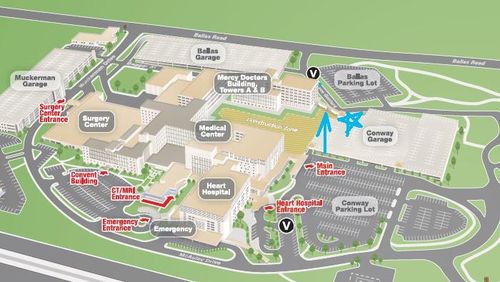 After the appointment, the Ballas (wrong) garage was easy to find. It was 2:30. And I only wandered in the 90 DEGREE HEAT in my SUIT in the WRONG GARAGE for half an hour, looking outside the garage for a walkway and inside the garage for my car: 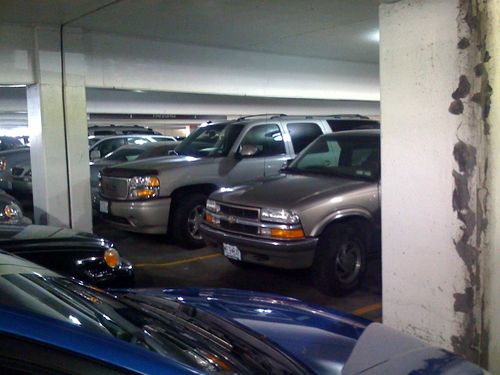 I intended to post this on Twitter with the blurb: "Do you see my car? Nope. Neither DO I." But I was distracted because my brain was cooking. I connected my last two functioning neurons and went back to try to retrace my way to the mythical overheard walkway. "I swear I went in and I was on the second floor," I thought desparately. "Surely I can tell someone at the Information booth and they can tell me how to find it."

So I went back to the doctors building and with my 100 degree brain, went to the information booth, which was unmanned, and then I decided to retrace my steps from my doctor's office door because the Phantom Walkway was right below it, I swear.

So of course I got lost in Saint John's trying to find my way to the doctor's office where I had been half an hour before. 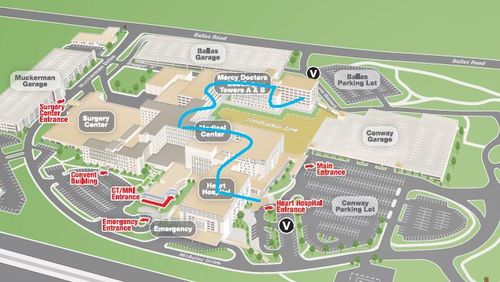 Because Saint John's uses this as a navigation aid: 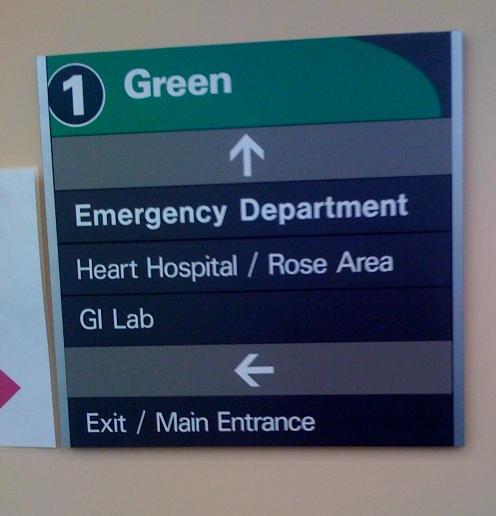 They have areas: green, blue, purple, copper, yellow, and rose (I suppose to avoid red and its blood implications). There is about one of these signs every area and nothing in the green area is green. Nothing in the blue area is blue.

Still, I did not go straight ahead to find the rose area (where, obviously, nothing is rose except the swoop on the sign), instead I found the main entrance and Main Information.

"You look a wreck!" the information lady volunteered immediately.

"I am lost. My car is lost." I speak in one syllable words. I try to explain the overhead walkway. "It's new. You built it. I was there. My car is there."

Finally, the nice man in the security van was summoned.

"Walkway?" he said, "There might be a walkway somewhere." He is now familar with the walkway because I pointed and screamed "WALKWAY!" when I saw it on our journey to the Ballas (wrong) garage.

Even though I was only lost outside for half an hour, the heat took a toll on my brain. I went back and tried to work, and Marcia can tell you I was not functioning at peak capacity. (I confused the Articulate xml file with the player.html file! There! Six of you know how cooked I was.)

My limited brain capacity slowed down the Marciellen team, so we were still working at ten. I was brain damaged and hot and punchy and hungry then. Finally Marcia and I stopped working and went to Denny's. I remember talking baby talk to the menu and our food (and, earlier, the Articulate player file). I had a burger with an egg and hash browns and cheese ON the burger. Like, breakfast literally ON TOP OF dinner. Anyway I hope the protein helps rebuild my brain.

Posted at 01:40 AM in In Which We Mock Our Illness | Permalink

Your stoicism is admirable. After such an ordeal, you should have gone home with the a/c turned down to arctic with a bag of ice on your head.

My mother died at St. John's Mercy. Thankfully, it wasn't because she was looking for her car. That would've been embarrassing.

Becs - Not stoic. Stupid. Stubborn. And Teddy-whipped.
3 - Ha. When I was at the Info desk a couple next to me had just had an accident in the parking lot. They drew attention from me, but they didn't look crazy, so I won.

THIS IS WHY I DO NOT WORK AT A BIG EFFING HOSPITAL ANY MORE.

Because even when you get to work, you STILL HAVE A HALF HOUR COMMUTE.

and EMPLOYEES HAVE TO PAY FOR PARKING.

don't get me started.

I mean THERE YOU WERE FOR SOME HARD CORE NEUROPSYCOLOGICAL TESTING. Which requires massive amounts of brain power for anyone. LET ALONE SOMEONE THAT HAS TO SCHLEP THROUGH 100 DEGREE HEAT, TRYING TO FOLLOW THE GREEN AND BLUE AND ROSE COLORED LINES ON THE FLOOR.

(every hospital uses this method of directing traffic, gah).

Did they have a shuttle van?

(the nurse bows and backs away)

I am totally with Becs on this. You should have gone home. Actually Gary should have been there and taken you home, despite your vapid pleas that you would be fine. I can't even imagine how this threw your hole day out of whack. I hope the protein helped.

That Denny's meal sounds disgusting and wonderful all at the same time. Dinner + breakfast = fusion, right?

Mrs Hall - OH I would have KILLED FOR A LINE ON THE FLOOR. No lines. None. Stupid.
Surprising Woman - I only briefly considered calling Gary. Then I imagined the conversation that would make me feel insignificant compared to his job.
Caroline - Yes! Did you eat at iceKitchen yet?

I liked the Ice Kitchen Burger. I was underwhelmed by the corn chowder. Given the build up I expected more.

I was nauseated by the bathroom wallpaper. And what is up with the top of the bathroom wall being open from the women's room to the men's? Seriously - look above the mirror. There's no wall for the last foot or so above it.

It wasn't bad, just a let down. But I sat on the patio in lovely weather and had a good time visiting with friends I rarely see.

Huh. Never noticed the bathroom wall. Perhaps it's a Chuck berry restaraunt. At lunch it's iffy. I had the burger once and it was magical, the next lunch it was enh.

OMG! I am SO VERY GLAD someone else has this problem! I used to live near a Big Research Hospital, and I thought it would be great to get straightened out some puzzling medical issues I was having. (Which ended up being diagnosed as "Well, maybe MS. You might have had a stroke a few months ago. Or, maybe it is something else. We're not Dr. House you know; we'll probably never figure it out. Keep coming back for MRIs every three months and just forget about the fact that your insurance will not pay for that.")

I got lost in the horrid parking garage EVERY SINGLE TIME. I spent so much time trying to find my way into the building that I was so incredibly stressed out by the time I got there whatever other medical problem I was having was so much less important to me. This was only exacerbated by the militantly unhelpful (and nasty) staff at the hospital.

After a year and a half of this I just gave up. No more visiting the terrifying parking garage. (I swear, my heart is racing just remembering it!) No more pointless dr visits.

To add to the "helpfulness" they prided themselves on, the hospital also refused to correctly bill my insurance, resulting in every single bill for every single individual procedure being denied several times over (I blame the insurance just as much, of course). That, added to the stress of trying to get INTO the building and then back to my car - just not going to the doctor made me feel much better!

(And, no, I'm technically not an idiot despite how this sounds. I have a law degree. I have a Master's degree. At the time of this medical debacle, I was in one of the top PhD programs in the country for my area. I'm a professor now. But, hell- I was there for trouble with my brain! Couldn't there have been some sort of instruction on "Getting to the Building" that might have helped me??? Grrrrr!! Thinking back to it all, I think I need to go have a nap to recover. My head hurts.)

Mary - If it makes you feel any better, there's a chance I screwed over your insurance company for you. Not on purpose, but I was diagnosed with MS 5 days after my Blue Cross insurance started. They started off in the hole - MRIs, hospital stay, and 1,000 a month drug bills.

Was it a cobbled hospital? Meaning, was it cobb;ed together like a Baptist church? A small hospital with a big ER tacked on then an big research center tacked on etc.? They need to just raze old hospitals when they expand them.

This post haunted me yesterday. Rebecca broke her foot Thursday and we had to go see her orthopedist (yes, she already had one) Friday for a cast. His Friday office hours are at St. John's. Imagine my fear when faced with getting a 5yo who couldn't walk and a 12 week old infant through this maze. Thank God we only had to go to the first office suite in the building. Whew! But what the hell is up with that color coding system? I saw a sign with six colors on it, and not one of them made sense.

Caroline - I know! And it WOULD make sense if anything in the "Rose" area were ROSE! We should break in with some paint. (Oh, and sorry to hear about Rebecca, poor baby. I have never broken a bone myself, but I hear it isnt pleasant.)