The grocery store visit began innocently enough. Gary was in the produce aisle and asked "Carrots are too crunchy. Why don't they make and sell steamed carrots?"

"I could make you steamed carrots," I murmured obediently. 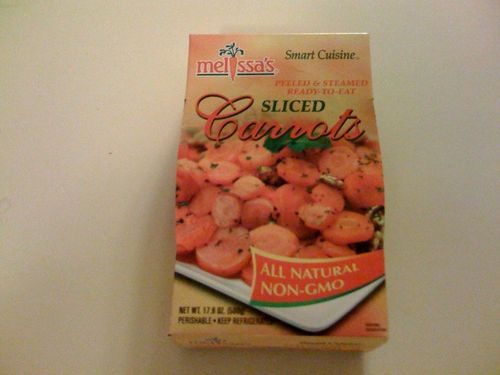 "Well, it was meant to be. You have to buy them. And these." 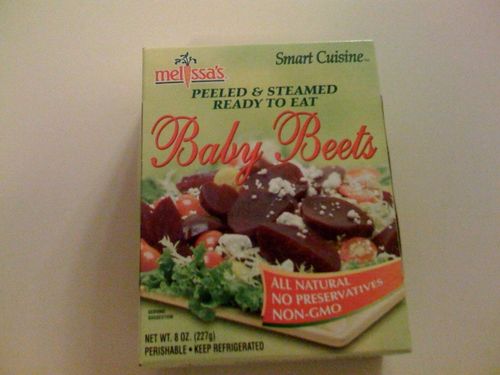 I hate beets, but Gary must be iron-deficient, and we were on a weird food roll. 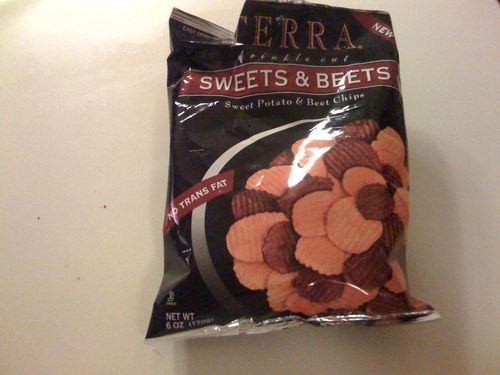 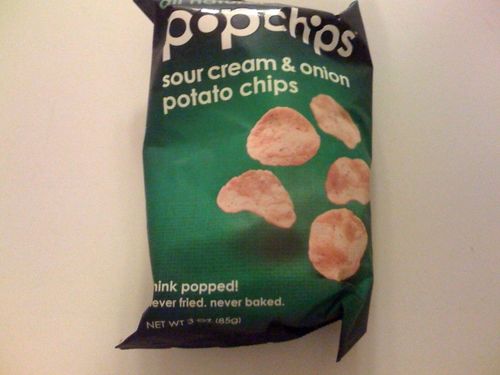 About then I started to grab ridiculous things off the shelves for myself. Like these. Never fried, never baked, just popped. I doubt they are tasty, but who knows, maybe they are. 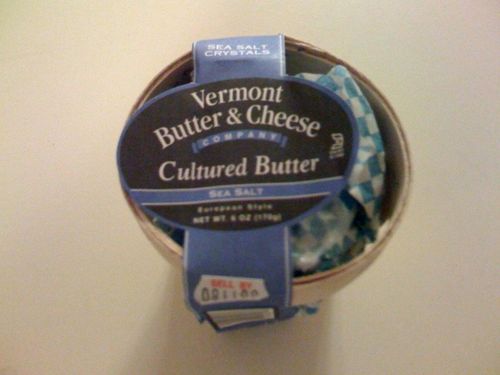 This was really good butter. It's cultured butter, motherfuckers. 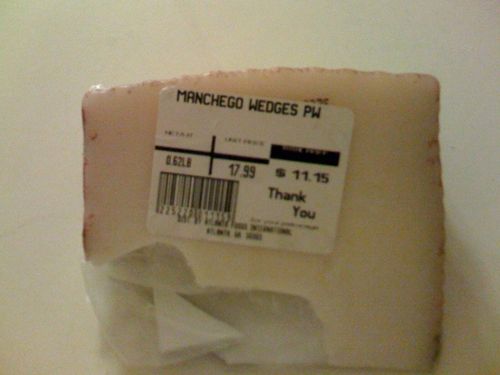 I have not yet tried the 18 dollar a pound Spanish Manchego goat cheese above. As you see Gary has tried it but evidently he didn't like it. Because it is still here. 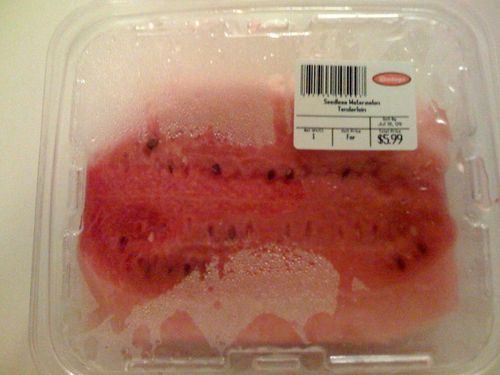 I wanted to buy a watermelon, and of course Gary roared "TOO MESSY!" Then we considered pre-cut watermelon, and found they now have watermelon cut into spears, because that isn't racist, and then I found this: Watermelon Tenderloin. A good compromise. Gary deemed it not too messy.

I also bought some Mizthra cheese to grate on some Orzo pasta to make what I will call Pasta with a Z. I'm not picturing it here because one wedge of Mizthra looks like another. This caused some confusion tonight when Gary was tearing through the fridge looking for expired food. "THIS WEIRD MIZTHRA CHEESE HAS BEEN IN THE FRIDGE FOR MONTHS!"

"Days. We bought it two days ago."

I paused, then pointed at the calendar. "July."

Anyway, it was fun to buy ridiculous food, especially since Gary paid the bill. They can steam my beets and culture my butter, that's fine, but I would never pay to have someone cut the rind off a watermelon for me.

Posted at 12:37 AM in In Which We Mock Our Husband | Permalink

Wonders will never cease. Pre-steamed carrots:now I've seen everything.
At OUR supermarket they have watermelon cut into bite-size chunks so you never have to touch it at all.

I initially bought that Vermont butter and cheese cultured butter stuff thinking it was cheese, not butter. I cut off a hunk and took a big bite. Bleeeeerg. (I went shopping without reading glasses) Used properly it is great butter though.

So have you tried the manchego, yet? Eat it room temperature if you do, it's better at room temperature. Also, you got ripped off. I pay 12 bucks a pound for stuff imported from Spain to a really fancy cheese shop. Maybe it costs more to get it inland, or something.

Pre-made beets seem genius to me. Beets aren't *hard* to cook, per se, I just wash them off, oil, salt & pepper them, wrap them in foil and toss them in a hot hot hot oven for what seems like all of time, but my god, they're messy. So, so messy.

I'm curious what you'd get if you went to Whole Foods or Straub's!

I'll take the last of Manchego. Just served it at 4th of July. :)

Not only do I serve my husband beets, but I grow them in my garden. Those are one of the things that the damn birds eat, little bastards.

I can't believe the food y'all bought. All I can say is YEAH! OTHER PEOPLE'S MONEY.

Gary has a straaaange relationship with food, is all I'm saying. There must be ancient trauma there, some character-defining encounter with stickiness as an infant, or something.

And as for being able to BUY all this pre-cooked, packaged food - well, I'm restraining myself, but I think you know what I want to say.

Gaoo - In bite-sized chunks? Now that's just lazy!
Zayrina - Oh, blerg indeed ... It was even a little strong with just rye crackers lightly dipped in it.
Magpie - Me too. It cracked me up. Next, Filet of Watermelon. Hearts of Watermelon.
Tami - I have never in life made beets, not even canned beets. I'm going to try the Manchego tomorrow night with the watermelon.
.75 - No! MY Manchego. I'm going to hide it in my room so it's room temperature. Been to Trader Joes, but mush of their weird food was ultimately scorned.
Surprising Woman - He loves to buy stuff.
What can I say? It's his love language.
Big Dot - I think the underlying trauma was with hearing parental arguments about "Having to clean all these pots and pans." I am sure there are issues with the refrigerator being too full after shopping. I keep telling him we have a mush bigger fridge than his parents and everything will fit, but it's still a hot button.

Are you SURE you need to keep that Manchego to yourself? And have you got some huge juicy purple kalamata olives to go alongside it?

JaneB (Welcome JaneB!) - I have to say, I hate any olives except the black ones in a can. I know, black olive is to olive what maraschino cherry is to cherry. What Velveeta is to cheese. But still, I love the black olive and hate all othes.