Let me first respond to the questions people asked me in real life.

"How were your seats?" Seats were not bad. 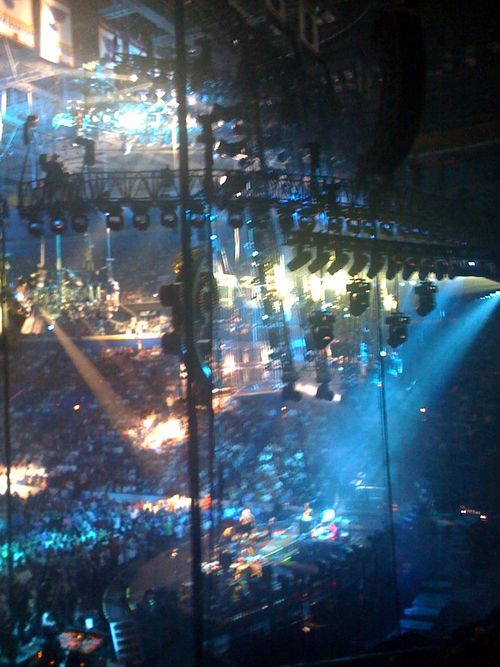 (The steps up to the stage can be seen on the bottom left - white with black lines. There may or may not be two pianos on the stage at this point. Drums came up, went down, pianos came up,went down, and Billy's rotated.)

"Did they play together?" Together, then individually, then together.

"Was it sold out?" Oh, yes. And everybody sang the chorus of Piano Man in the final encore.

"Did you like it?" Well, duh. You kind of have to like it. However, the woman next to me talked through all of Elton John's performance. Then, in the middle of "Goodbye Yellow Brick Road," she turned to me and drunkenly said, "He needs to get this thing ROCKIN!" then staggered off to get beer.

Actually, I started to wonder why it didn't bother me that she talked through much of it, and I realized neither of use were there to hear the music, since it was carved into our neurons since Junior High. I looked at Gary and his air of satisfied self-content and decided we were there for the same reason we went to Shakespeare's house and Stonehenge. To have been there. So there was no way to not enjoy it.

We came in about 10 minutes late, so I suppose Elton may have said hello to the crowd then, but it was honestly an hour later before he brought his head up. 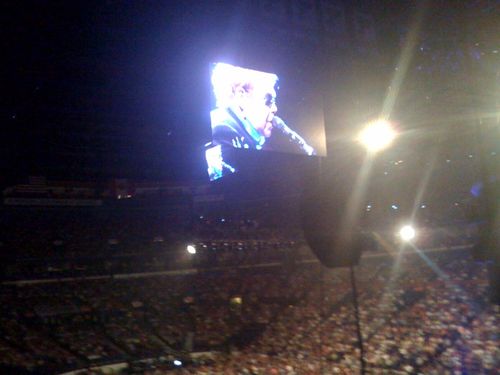 Then he said, "Hello Saint Louis, I hope you are having a good time." Then he played more classic rock music. Billy Joel, on the other hand, came out and discussed the venue, and the seats, and his bald head, and the fact we were all Twittering. Delightful. I've been spoiled by BNL 1.0, which had frontmen who would come out and discuss their vasectomies (Steve) frozen sperm (Ed) fear of moths (Steve) and misadventures in planes (Ed). I'm not used to having a musician come out and "just" be an artist. Hmph.  And to be fair, in lieu of communicating with us Elton did point at us. Lots of pointing. A Hillary Clinton level of pointing. He pointed at every section at least once.

Still, I'm not complaining. However, I did come down with a Swine-flu like fever the very next night. And, you know, they didn't play any of their new stuff.

Yeah, it's all about being there with that sort of concert. (I'm hoping for that next month with Simon and Garfunkel.) Elton and Billy Joel, what a great pairing (ahem) - we should be so lucky.

And, do you really want those cheesy local references that always ring so false (and that some members of the audience so embarrassingly lap up)? A simple hello and welcome will suffice if the performer's not feeling genuinely chatty.

Big Dot - but I love chatty. And you could tell Billy Joel had played St. Louis before; he knew every permutation of the Keil Opera house into the current arena where we were.

They have new stuff?

I'm glad you had a wonderful experience, even if you did get a fever.

Eons ago at my last Billy Joel concert at the Arena, Billy had made a passing joke about that acoustically-challenged venue. I've seen the man four times in concert and I loved (and continue to love) his music up until River of Dreams. That album... meh.

I've seen Billy Joel alone and in concert with Elton John. I promise you he has SO much more personality and is much more fun by himself. And even when he's boring, the man can play a piano like no one's business.

Thank you for the review and pictures!! :)

One of these days I'll see them both live, together or separately.

Hot Mom - No, I was kidding. I know of no new stuff, anyway.
3 - OH I have to tell you. ELTONs voice is worse now that he's older AND SO IS Billys. We got Billys Stranger CD and Eltons greatest hits and it's really obvious their voices have gone to crap! YES! just like Leonard Cohen, so you just hush.
Overflowing Brain - Well, to be fair they both can. Their styles of playing are so different too.
.75 -You are welcome.
Caroline - I might skip Elton next time.

Bruce Hornsby is a very chatty guy at his concerts and actually talks to people in the audience. I love this. We also seem to have a book club going, too, since he frequently talks about what he's been reading. Is it any wonder that I love this man?

Becs - I'll need to look this guy up if he comes to town.