Are We Not Entertained? 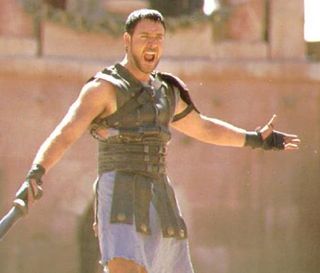 So, there's a baseball player named Manny Ramirez. It seems he is the latest to have fallen to a steroid scandal. Or, technically, if you read the article, an anti-steroid-side-effect-drug scandal.

I remember when it became evident Mark McGwire had used steroids. The debate around town here in Saint Louis was, "Well, what would you have, big guys making home runs or skinny guys making singles?"

At the time it was fresh in my mind how much fun the home run race between Sosa and McGwire had been, and I thought, well, baseball is just entertainment. If they want to be more entertaining, let them. (I just wanted a level playing field. I wanted all the steroid users in one league and the straight players in another league. I was a purist about that. No big bad boys versus good skinny boys. A different stat book, different rules: like the WWF versus greco-roman wrestling.)

Clearly, I didn't think it out carefully. Now that some time has passed, I don't want baseball players risking their health to amuse me. I also:

Don't want rock stars to use cocaine to give me a good show.

Don't want poets of the Romance period to use opium so they can write Kubla Khan.

I could even do quite happily without Sergeant Pepper's Lonely Hearts Club Band.

But back to sports performers. NHL Hockey allows fights. Isn't their excuse that fans come to see a fight? Admittedly, fights were once the best part of a Blues game, but that was when I was six and hadn't begun to lust over Gary Unger. What can I do? I could boycott hockey games and baseball games and football games and pro-wrestling. Done! Hey that was easy.

Now should I take Back to Black out of my CD player? I think not. Amy Winehouse isn't trashing her body so she can make me more entertained.

Although of course I know it's better for him, I still regret the day Clapton turned his back on cocaine. Come on, admit it. He was so much better when he was a junkie.

I hope we never find out Pujols is dirty. Right now I believe he's everything a baseball player ought to be, and I hope it's all talent and hard work.

Becs - I don't know enough Clapton - just that sappy Tears in Heaven song. But remember, I like lyrics, and his work on While My Guitar Gently Weeps didnt have many words.
Sue - Not stirring up much controversy - except for Becs there.
Caroline - He'll break your heart Caroline.

I believe in the Pujols.