« Are We Not Entertained? | Main | On the way to the Elton John Billy Joel concert »

There was a booksale at TeddyJ today. I donated a sack of books Gary culled from our house. All of it crap: Tom Clancy, The DaVinci Code, John Grisham.

Later, Friend 3 and I were poking around the books, when a mutual friend, Steve, came by with The DaVinci Code in hand.

"Hey, I donated that book," I said, suddenly all proud of The DaVinci Code, as if it were an obscure piece of fiction I had donated. It might not have even been my copy.

Steve began thumbing through it. He stopped at the first page and said, "Someone wrote in this book."

"'This book is an albatross around the neck of Margaret Davis.'"

"Mom!" I squealed, and grabbed the book back from Steve, who then insisted I pay for it.

I had forgotten we demanded Mom read The DaVinci Code. She read it under duress, and annotated it accordingly (annotations listed below).

She illustrated the frontispiece: 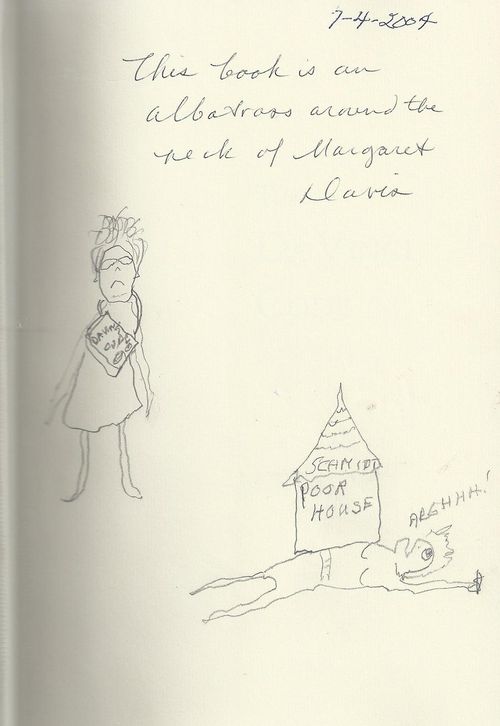 (I think that's Gary being crushed by the poor house. The uh ... Scaiydt poor house. Or perhaps it's me, what with the boobs and all. If I remember our crime was buying her her own copy instead of waiting for Hot Mom to return ours.) 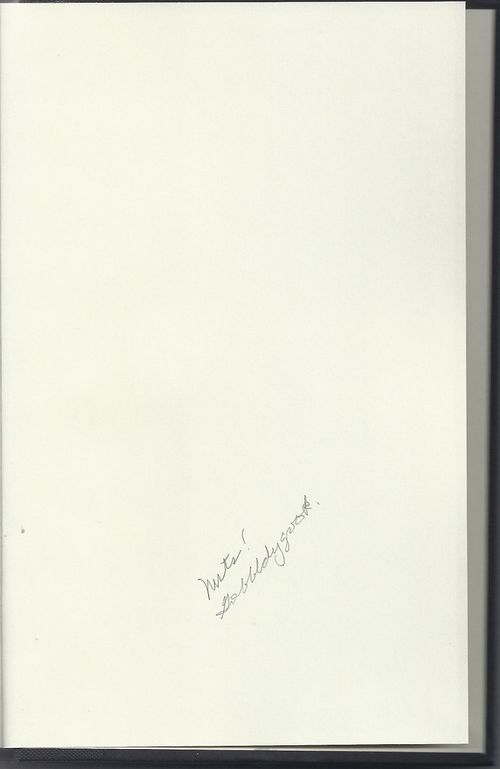 And in between there are these annotations:

It does get pretty lame near the end [SPOILER]

Posted at 01:06 AM in In Which We Mock the Queen Mother | Permalink

This is so cool! A book of jokes - or wry comments - from beyond the grave. It's like that film, book, whatever, where there were banknotes hidden in the pages of all the red? books in someone's library.

Have you looked through her other books?

It was really quite something to see you so surprised and excited to read notes from your mom to you.

This is great! I think you should auction it off on your blog...because I want it. As Big Dot said, have you looked through her other books?

I would have loved your mother.

I have a big smile on my face right now. I hate the stupid Da Vinci Code.

Fabulous. I'm so glad your mom is still finding ways to stay in touch!

This is the most amazing find ever! What a gift. This would make a good movie on Lifetime with a few more twists.

I am so delighted for you. Your mother sounds like a jewel. I love sassy women.

So did you pay Steve back?

Your mother must have been a pip.

And I kind of love that you had a booksale at work. Who got the proceeds?

What are the chances?!?! That is so excellent!

It took her til chapter 28 to begin hating the book? I am reminded how tiresome it was just by seeing a few sentences at a time here. Even Tom Hanks can't take it seriously. He has been on the latenight circuit all week talking about ANYTHING but the stupid movie.

Well now I'm going to feel cheated if I read a plain old copy of this book.

I wish I'd met your mom.

Big Dot - I'm saving her annotated Collected Works of Dickens for when I'm seventy and start forgetting her.
3- It made my day.
Becs - Well, there'sthe Dickens and the Briodges of madison County out there. That I Know of.
Christy - Hard not to.
Erin G - I thought it was like being tied up and tickled. Fun but ultimately annoying.
Trisha - I know! Plus I'm going to steal all her plants this weekend as well.
Surprising Woman - Very sassy
.75 - No, it wasnt his book yet, since he hadnt paid for it.
Magpie - The Saint Louis Arts and Entertainment Council.
gaoo - I just watched the Colbert Report with Ron Howard. Isn't that Miss Jesus with him in the trailer? I thought A & D was a prequel.
Caroline - I think 3 is the only one who met Mom.

Oh, this is so funny. I'm glad you got it back!

I'm too stunned to hear that you paid for two copies of this book to really enjoy the comments. I really wish I could have met your mother.

Angels and Demons was a prequel. It's basically the same book with a different conspiracy and it's better written.

Those are outrageously funny. Really.

And I also wonder how many hours were spent flipping through the pages to find them. A little treasure for sure.

Sue - I am too.
Hot Mom - Yeah, but I'm pretty sure the French Little Miss Christ is with him in the trailers, though it's a prequel. Is he banging her?
Overflowing Brain - Oh, about an hour. It is a little treasure. I need to space treasures like this throughout my life.

The frontispiece illustration should be used for the cover of your book.

Snort! I didn't realize Mom could draw so well.