Because I am now a S_______, I ignore a person's actual day of birth, so Gary's March 20th birthday passed with no other event than I watched the conclusion of Battlestar Galactica at his side and tried not to ask any questions given I have never seen any other episode of the show. I can report Gary was deeply offended by the ending they selected.

However, lavish birthday gifting happened the day before and today, the day after.

We visited the Maplewood Drum Headquarters and he got whatever he wanted, and I bought myself a steel drum. I tried to play it the evening and it made me appreciate my guitar much more. Still, I'm going to keep at it, because I know one day I will make that connection between the random noises coming out of the instrument and that thing they call music

At any rate, Drum Headquarters is right across the street from Acero, Catherine the Red's Italian Restaurant find, so we ate there for dinner. They have rearranged the menu. 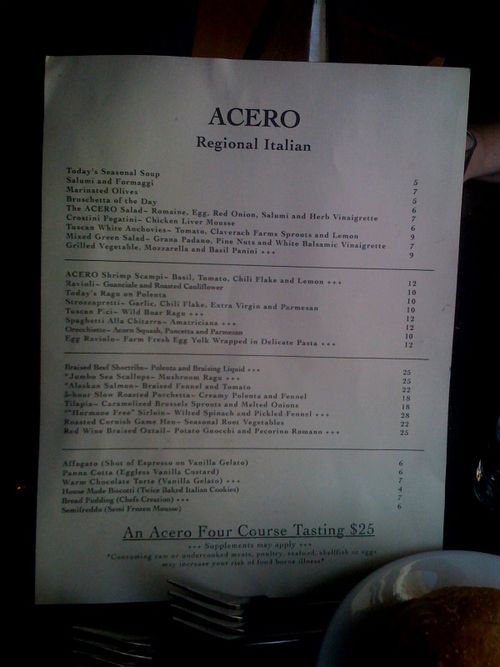 And of course we went with the four course tasting. Are you insane? $25? Sure, there were small surcharges on some things, but we didn't have wine. Here's what we had:

Top - Crostini Fegatini (with Chicken Liver Mousse) - not a bad liver taste, but a good liver taste. I have never before tasted a liver product that didn't taste like dirt.
Bottom - Bruschetta of the day, which was bruschetta with caramelized onions, honey, and blue cheese. My first bite missed the onions and was just blue cheese and honey, but the next bite added the onions and it made total sense. 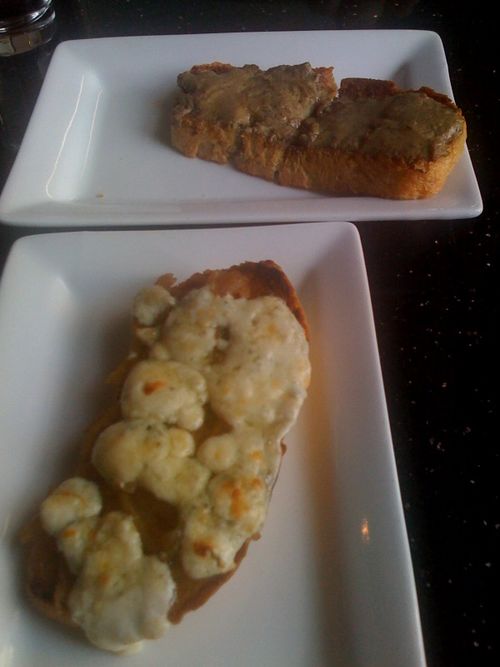 Then, my favorite of all of the courses, the second course. I don't know if there are usually second courses in Italy.

Top: Egg Raviolo - while we were waiting for them to open, Gary did some research and read on the Internet the Egg Raviolo was just voted one of the 30 best Dishes in Saint Louis and the Lamb Polenta rendered diners speechless. The Egg Raviolo did have happiness and comfort baked in.
Bottom: Lamb Polenta did not render me speechless. Mainly because I'm accustomed to more substantial polenta, I think. The yellow on the sides of the photo? That's the polenta. So Gary got that. 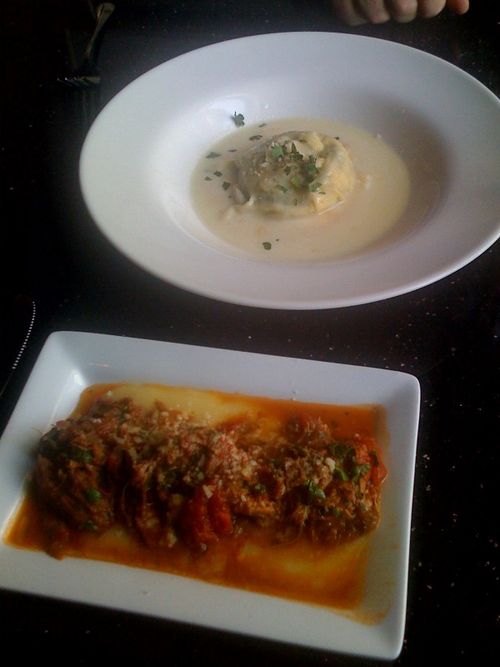 Then entrees - the lady at the next table was concerned that she didn't see normal protein on the menu "like chicken." Given that she didn't like red meat her choices were Cornish hen, seafood or "porchetta" (which really doesn't sound like pork).

Top: 5-Hour Slow Roasted Porchetta with Black Licorice. No, with fennel. Pork roasted with fennel for five hours really tastes like fennel. Gary kept sensing lemon. No. Fennel. Bleh. Fennel is second only to cilantro and is right above skunkweed on my list of vegetation God didn't mean for me to eat. Then again, they had made liver edible.
Bottom: Red Wine Braised Oxtail with Potato Gnocchi. Sadly, it was evocative of the Pot Roast Dinner at Bob Evans. I think Bob Evans serves this on top of potatoes, and this was on top of potato gnocchi, which is potato inside soft pasta, which was a distinction too subtle for my tongue. 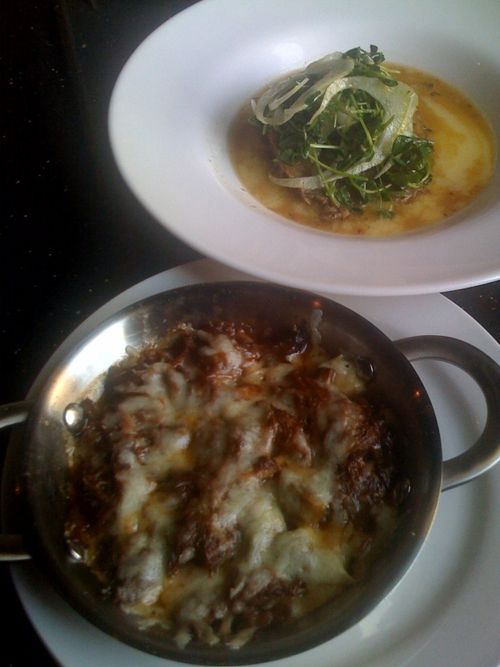 Top: Panna Cotta ("eggless vanilla custard" - because the eggs would just have made it too rich? That ship has sailed, come back, docked, and been fitted with a karaoke bar.) Gary loved this; I was too busy trying to figure out the mystery ingredients - custard without eggs? Evidently it's cream, sugar, and gelatin.
Bottom: Bread Pudding with chocolate and nuts and hello, surprise, ice cream. Come to my digestive system. I don't think it was made with croissants, it seemed too hearty. In fact, it wasn't too rich. Evidently they start with the fattening stuff in Northern Italy and back off when they get to dessert. 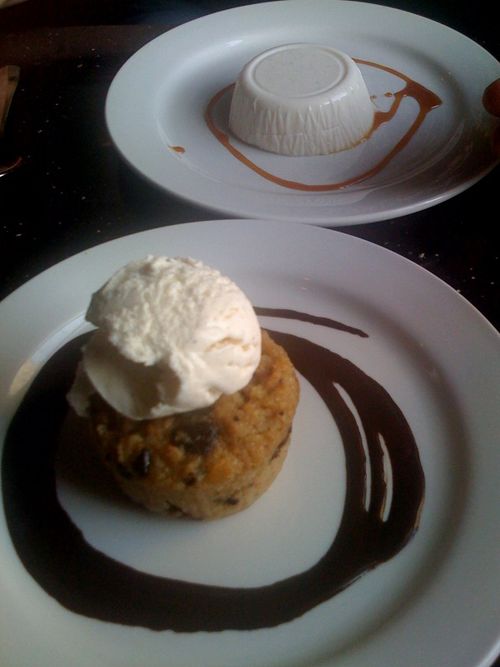 If you go, ask to be seated in Brittany's section. Since she'd been so agreeable about allowing the photography and the toting out of bread, I asked her name again when we finished.

"Brittany," she said.
"Britney?" I thought, incredulous. "How do you spell that?"
"Like the province in France," she tossed off, and I was all, awww, she thinks I know all the French provinces, which I don't, I only know that one and and perhaps one other. She's mugging like this because the first photo made her look worried and afraid of us.

And I tried to get a photo of Spunky peeking over the top of the table, but Gary forced her down to the floor, because we were eating all civilized-like. 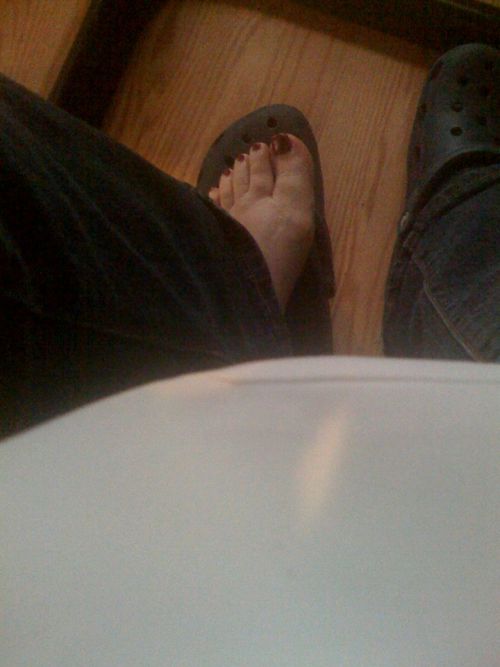 Posted at 03:09 AM in In Which We Mock Ourselves | Permalink

Sounds like a lovely evening. I suppose this far overshadowed the Reuben sandwiches and kugel at the deli Friday.

3 - Not at ALL, since Gary on the drive home kept talking about how he liked that Reuben more then his mother's. Just the right amoutn of 1000 Island dressing, it seems.

Wonderful restaurant. Probably because of the wonderful company. Spent a lot of money because we got the 4 course sampling. BTW, you're not supposed to drink out of the little sampler containers even tho they are so adorable.

How does poor Brittany manage to carry loaded plates with an artificial arm?

.75 - I loved it. I think Cathrine had said another place had supplanted it in her heart.
Big Dot - It's a bionic arm. We have those. Don't you have those in NZ?

Queen - Would love to know what that other restaurant is. Acero will definitely hold a special place in my heart for a long time.

I have a real problem with the eggless egg custard. I mean...what?

Queen - Can I feed your toe some cheese?