I've been going to Target for a long time. Not as long as Target's been around; it's been around since I was born: 1962. I went to Target when there were two non-Kmart discount stores: Venture and Target, and they were essentially the same.

This is my Target:

I went to Target when Mom called it "Tar-ghey" and people laughed because they hadn't heard that joke before. That's how long I've been going to Target.

Then Target ate Venture and then went through some upscale makeover.

We all went to Target some weekend in 1999 and came out going, "Dang, that's some nice stuff at Target. Too nice for me. Where do I go for my junk -" and then Walmart heard us and erupted from the ground at our feet. Meanwhile, you kids have been going to Target not knowing its lowly position on the Great Chain of Being of Chain Stores - one rung above K-Mart and two rungs above GrandPa Pidgeon's.

The lube is by the condoms, and it always makes me feel a little self-conscious hanging out by the condoms, so I was pointedly not standing in front of those naughty condoms when I saw 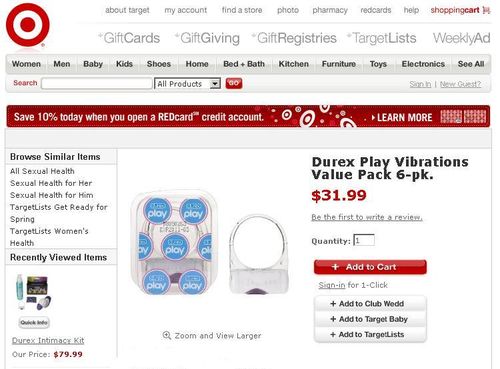 Get your Vibrating Cock Rings at Target!

My MOM took me to Target!

And no, I didn't buy them. Instead, I inadvertently bought something much more effective: a sports bra. It would seem being lifted and separated isn't as exciting as being flattened and smooshed. Who knew? And who knew there were cock rings at Target?

You are responsible for putting MORE RUDE STUFF on my screen than any other site I visit.

And, since I know you worry when I'm not here obsessively clicking on you when I'm meant to be doing work, I'm going away for a week. Look out for an exotic little dot somewhere new if I can get to a computer.

My husband informs me they also have these at Walgreens, as well as finger vibrators! He's apparently not embarrassed to hang out by the condoms.

Big Dot - I am chastened. It's now an extended entry so vibrating cock rings don't pop up without warning at work.
Heidi - After I got over the shock, I felt the condoms were virtuous and I was prouid to stand before them. With the vibrating cock ring box in my hand and my jaw slack.

wow. and a six-pack of them, no less. what kind of spin the bottle parties are these kids having nowdays?

I was going to tell a sweet Grandpa Pidgeon's story before we got to the cock rings. Since Target generally has better quality products than Walmart, are you tempted to do a comparison test for us?

I miss Target. It was all shiny and new in Florida, exotic in a land where the local Wal-Mart had the gravitational pull of a black hole. We had to DRIVE to another TOWN in another COUNTY to go to Target.

Then they put one up right next to the Wal-Mart. In fact, it was a few hundred yards CLOSER. And it had a Starbucks inside.

And then I moved to SC, and I have to DRIVE to another TOWN in another COUNTY to go to Target.

FTDS - Actually, the six-pack is only available on-line. But they really do have singles at Target.
Caroline - Wouldn't that be a better question for Gary?
Sherri - A Starbucks IN A Target? Ooo, it's all so high-tone down there in Florida!

Well, they balanced it with a mini-Pizza hut on the other side. Still, as Target Foodcourts go, yeah, sorta spiffy.

Yeah, I just noticed them for the first time today, at Walgreens! The world has moved on!

Wow, I was totally unprepared for that.

I just got a wedding registry notification today in the mail. They are getting married in the Temple, I am not sure which one, I forget since I am not a "member." Do you think this is going to be on the "we want one" list?

I wasn't telling you off, I just found it a bit startling.

This computer's too slow, so re your FIL - I'll mention him to the next Buddha I see.

Amy in StL - Yeah, me too! I was SHOCKED.
Surprising Woman - Hey, Temple - that reminds me. Is this letter of recommendation now a keycard? Gary found someones Temple keycard on the work parking lot, and we surmised that what it was.
Big Dot - See above! SHOCKED I tell you. India?

Nah. Clue is, you're not the only land of the free. I wonder how many log-ons make a dot (can't do question marks, too hard - this keyboard has at least 3 symbols on each key).

Gary MUST try to get in at the Mormon temple. Maybe he'll run into friend 7 there.

Husband of Hot Mom is insisting I go to Target.

I got kissed by an elephant yesterday - lots of suction and very whiskery. So, not much different from what I'm accustomed to at home...