In every "Top Ten Ways to Spice Up Your Marriage" article, "change your appearance with a wig" is at least in the top three.

So the wig came today as we were getting ready to go to his Mom's house for the birthdays of the niece and nephew. I snuck it off the porch, put it on when Gary was showering, looked in the mirror and thanked God for giving me brown hair. If you want to love your hair, walk a mile in someone else's hair.

When the shower stopped, I chatted with him outside the door until he came out and saw me. Immediate laughter. No other immediate reaction. And there was no question about that. I looked.

"Nothing," he said, gesturing into his general naked hip area.

I turned around and shielded my face.

I giggled and wiggled my ample ass.

However, you can make you dog look really sexy before you go to Gary's Mom's. 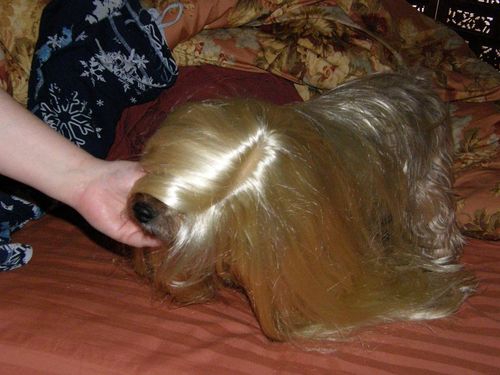 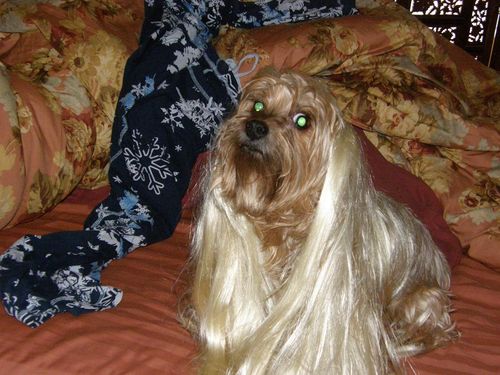 Dumb blonde dog rolls about on some sexxxy flannel pajamas he has found: 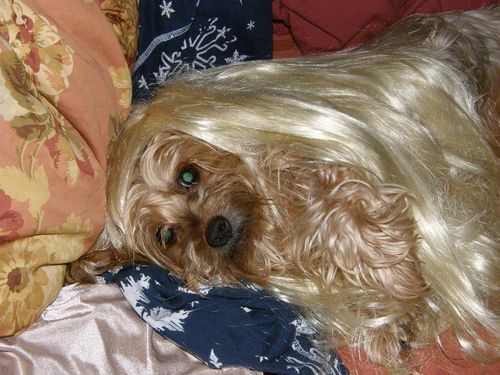 Dumb blonde dog exposes himself and works in some tongue action. Well, since those photos were taken we've had the birthday celebration - and oh - there is nothing more humorous than watching a Yemeni-bound 24-year old trying to eat lasagna with his hand. He tried his hand, he tried pinching it with a piece of bread in his hand, and then he had to resort to the infidel gold-plate flatware of the Great Satan K-Mart.

Anyway, we're back and it's late. All I've done with The Wig is brush it. I think I might need to flesh out my Fat Girl Next Door persona.  I think she needs a Southern accent and maybe a little hiccup at the end of the giggle. Maybe I'll give her a drug habit, I don't know.

Posted at 12:07 AM in In Which We Mock Ourselves | Permalink

Next time you're at the Great Satan K-Mart, be sure to pick up some shorts that are too tight and a tube top. And some ridiculously cheap and impractical shoes. If it doesn't do it for Gary, at least you've got next year's Halloween costume.

Tube top and a shrug with sequins on it. They exist. I've seen and walked a wide circle around them. Maybe you can find those acrylic platform shoes with the LED lights that flash when you walk.

I'm amazed at how parallel we run! I've been toying with the idea of going into town and trying on dark wigs (my current color is like your wig, but the only way I can get the shine is to iron it, and then it all breaks and falls off my head).

Yeah, try it again with Gary, but next time, don't be you. Be someone else. With bright red lipstick!

Gary should respond well to a tattoo of a cone of food. Just a thought.

Gold plated utensils? No wonder nothing happened after dinner. Although it's just about tacky enough for a Girl Next Door.

Dude! You already got your Halloween costume! No fair!

Um...can I invite the blonde to my party?

I should add I admire the choice of lasagne for dinner, particularly for a precious lad who has regressed to eating like a 1-year-old.

I think that wig was made for that dog.

I think that wig was made for that dog.

That poor dog is a hoot! Did he roll on command? Loved it!

Becs - Were it not for the shoes I could be Fat Britney.
Richard Basile (Hi!)- Oh, no, he's a Cosmo dog.
Sherri - Ohh! Clear heels.
~Silk - I didnt go so far as to arrange a meeting out ... because thats a really fake wig.
3 - This comment really baffled Gary. I had to explain.
Caroline - I KNOW. And the in-laws made US buy them for them for Christmas one year.
.75 - Sure. Except, she's really stupid.
3 - Sigh. Do they have Cheerios in Yemen?
magpie - He is a Silky Terrier.
Judibleu - He needed no direction. He's a natural actress.

That dog is hawt. Actually, he looks just like my little dog who died a few years ago, except she was a girl. And definitely hawt.

Hattie - I believe Mac's pedigree papers said his name was "Dusty DoRight" of the Arkansas DoRights. Perhaps they are related.

My World's a Stage - I used to think I didn't like dogs, then I met my first dog, Fred.