I pick at my nails. To overcome this weakness, I've taken to obsessively manipulating Silly Putty, even at work, even in meetings. People soon began to envy me my Putty. So, when Christmas rolled about I decided to give out Silly Putty.

Trip to Wal-Mart. They had no Silly Putty. Absurd! (Or, may I say, silly.) What they had instead was Flarp. 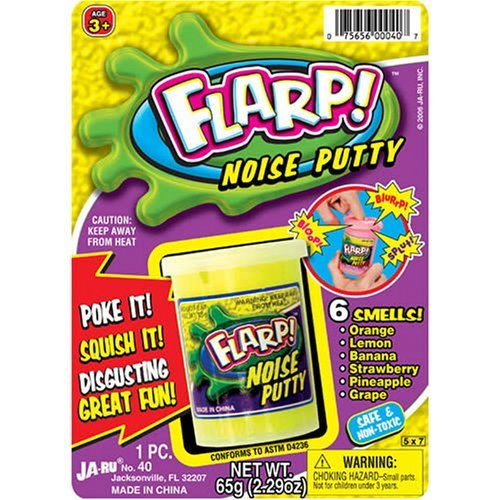 "Well, when I find Silly Putty I'll buy that, but for now I'll get this." I didn't think too much about the dainty packaging copy. I mean, I got that it made disgusting noises, but I thought that was just in addition and secondary to its putty properties.  I am not comfortable with flatulence. As you may know, Gary does not allow the word "fart."  "Poot" is what we say. Or "my GOD what is WRONG with you, what did you EAT?" But mostly "Poot." Growing up whenever Mom was flatulent my brother and I would scream "Gas Warfare!" and laugh hysterically. I had no idea the word "fart" even existed.

I got some real Silly Putty later and I brought both to work. I went to each member of my my team with a full bag and demanded, "Flarp or Putty?" Most had no idea what I was talking about and said "Putty" because I scared them a little. The guy in the next cube chose Flarp, squeezed it, and said "My Flarp is cold! I'll never get a chance to say that again." His Flarp was soundless. "Huh," I thought, "I guess it is just like Silly Putty."

This left me with a big bag of mostly Flarp.  I hung it on the door knob outside of the room where Marcia's team was having a team meeting.

I had pictured the workers daintily taking Flarp or Putty out of the bag before they trudged back to their desks where they would treasure my gift. Instead, I'd been back at my desk for a few minutes when I began to hear some mad giggling coming out of that conference room. Marcia's teammates had torn into the bag then gone back in to finish their meeting. The Team Leader was familiar with Flarp and decided as a Cool Team Leader to show them how it worked. (FYI: You take the Flarp out of the jar, then you put it back in. This disrupts the Flarp's digestion.)

Now I have unleashed the Genie in the Fart Bottle.  Marcia's team has not let up on the Flarp (or at least I hope it's the Flarp.) There are constant squeaks and gurgles coming from Marcia's cube and those in her area. Strangers from other departments have come up to me and said, "Um, I hear you know where I could get some Flarp."

And ironically, you can't get it on Amazon or Walgreen's anymore. I had to buy the rest of the supply at my Wal-Mart because some people got a little pissy they chose Putty over Flarp.

Having fun at work? That is so not fair.

No kidding. I definitely want to come work with you.

P.S. "Flarp" is now a verb on Team D. "Who flarped?" "Did you just flarp?" "You're flarping in my cube. Could you do that somewhere else?"

All hail the Queen and her gift of Flarp!

Oh God. I remember years ago when Ryan and I worked in the same office and a can of Flarp was brought in. One single can. All the guys were fighting over it, and it made the rounds and finally the president had to make them throw it out the next day because they would just NOT stop using it. It was horrible.

Thanks for solving my Secret Santa present block.

.75 - Wouldn't your current job accept Flarp?
Heidi - Sadly, there is no room in the kennel ... hiring freeze at TeddyJ. Damn economy.
3 - You will be known hereafter as Team Flarp.
Faythe - Yes! I am pretty sure Marcia's cool team leader is going to snap soon.
Big Dot - Do people break wind in New Zealand? Wow. Freaky.

Damn. I wish I'd known about this last week.

3 - Shush. Nasty girl.
Caroline - You have a child. Surely you would know about Flarp before I would.