Remember DoppleGary? The guy with Gary's name? His creditors would call us after finding my "Gary S____"  in the phone book?

And remember the Return of DoppleGary when his creditors began calling again?

Well, I hold DoppleGary's finances in my hands now. Hear now the tale.

First, a few months ago we got a phone call from a lawyer's office looking for Marla or Gary S_____. "Who the hell is this Marla woman?" I thought, "Mrs. DoppleGary's name is Elaine" (hence much of the confusion). I called the lawyer back and left a message about how my Gary was Gary E. S_____ and the other Gary is Gary X. S_____, and if he can find Gary X., I sure would like to know his phone number so I could forward all my calls to him.

Then yesterday, "Marla" got a letter from Bank of America, the bank favored by two out of two Gary S_____s. Based on my calculations, Marla's credit card is up to $150,000.00. They tell her  "Based on your recent payment history, we did not write off the above-referenced account as a bad debt last month." When I called Bank of America today to set them straight, they explained they just look up the address in their database and USE THE FIRST ONE, because of course THAT wouldn't be a problem. It's just that Gary E. comes before Gary X.

Google found them because they are selling their house. Their MILLION DOLLAR HOUSE.

At one time, Gary and Marla were trying to sell it for 1.5 MILLION DOLLARS. Now it's on sale for 1.2 MILLION DOLLARS. "MASSIVE PRICE REDUCTION!! Perfect Home!" Google screamed at me. Then Google Satellite whispered, "Look, they don't have a pool, but their neighbors do." I won't post the picture, but I'll show you what a brand new Million dollar home looks like elsewhere: 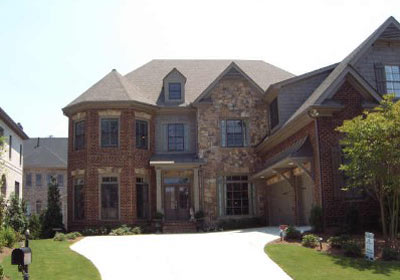 The square footage is over four times what we have. But I guess that's the penalty for paying your bills.

Oh, yeah, Google coughed up their phone number in about twenty seconds after I saw the photo. Gary saw the photo and said, "You can't give their creditors that number! I bet they have a lawyer living over their garage! They would sue us!"

But I could still get them. Somehow. I know where they live.

Good grief, and there was me feeling paranoid about your knowing how often and how long I log on for, and where I am if I do it from ANOTHER COUNTRY FOR TWO MINUTES.

The doppel-S_____s should be afraid, very afraid.

We started receiving calls from creditors for my husband's ex. I kept telling them they had the wrong number, but they were persistent. They pretended to be a long lost classmate and things like that trying to trick me into giving up her info. But when they called MY parents looking for her, I lost it. The next time one of them called, I gave them her work phone number and her mother's phone number. You don't mess with my parents.

I keep getting creditor phone calls for people who have never lived here. At least your folks have Gary's name!

you can too give out their number. You didn't do anything illegal to get it - anyone can google. Including the idiot collection companies, but that would be too easy.
They guy who had my cell # before me has some pretty major collections apparently, because I get all the calls. I also get text messages from his old buddies, who apparently are too lazy to get his new #. Sometimes I like to fuck with them and send them messages to meet me at wamma wamma bar. Hee.

Hmm... With a little energy a stalker could do some real digging armed with all that info.

The sad thing is that YOU found all this in probably five minutes, and the creditors -- the people who WANT MONEY -- can't do it in a month.

I used to have a phone number that had a very colorful history. I got wrong number calls from pawn shops, creditors, Division of Family Services, and - my favorite - a drunk booty call from a guy who was waiting for some chic at the bar of a rent-by-the-hour hotel.

.75 - Are you sure? Maybe they lived there under another name.
Sherry - Don't mess with the parents!
Velocibadgergirl - Yeah...but now that I've done the creditor's work I can tell them how to find him.
Caroline- No booty calls for DoppleGary.

Yeah... ignore me, why don't you. I who provided you with laughs at lunch today.

Jennt - (I almost said "Hi, Jennt" then I realized you were Jenny) I am ready to fuck with them. I have to go pick up a registered letter for them tomorrow, I think.
3 - Laughs to be posted tomorrow. (And I replied today at 8:30. I was barely awake!)