« Crotch Congestion | Main | It's Everywhere You Want to Be »

Remember how I said I was paying a ridiculous amount of money (minus 50% off) to get the Booger Silkscreen restored and matted and framed under archival museum glass? And I went to the West County high-end framing store last Sunday?

Next day, that would be Monday, I get an email from high-end store. Grim news, the store was closing Friday! For forever, after fifteen years. Complete surprise to all the workers. So, I had to rescue the Booger Print before they closed Friday night. They had gotten the restoration part done: 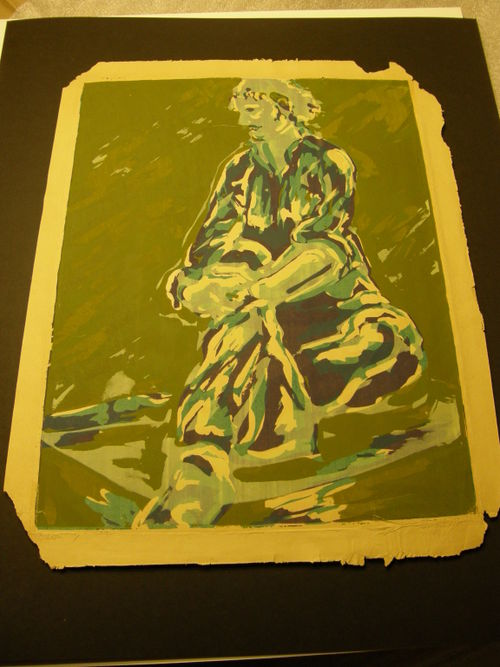 So, they had the frame sides, but not the two mats or the glass.  I have little faith I'll see the refund for that, but there was a Going Out of Business Sale. I found a lovely Mucha print in simply the most gorgeous mat and frame ever. The mat had gilded braided edges. Plus, I love Alphonse Mucha, commercial hack though he sometimes was. I have five Mucha posters dating back from college. I know this is heresy, but this new one matched my living room.

"Name your price!" the saleslady from Sunday said.

"Sounds good," she said, possibly influenced because I'd brought her a Barack HOPE print. (She did just lose her job.) Then I went back to class and smacked myself all afternoon for not starting lower. I went back right before it closed and cleaned out the place. I just tallied up the original prices , then divided it into what I paid, and I guessed right: it was a 90% off deal. If you base it on the half-price sale that is always on at the high-end store, it's only 80% off. 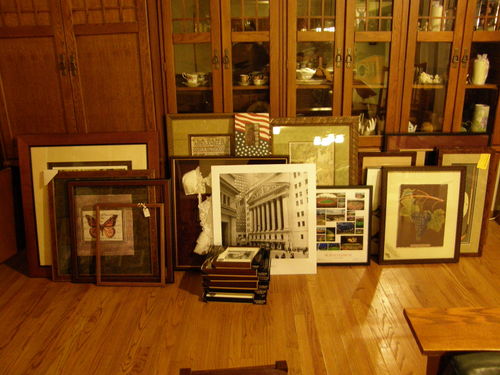 Feel free to embiggen. A few things are gifts, a few prints really appealed to me (the Wall Street one in the front is headed for my TeddyJ cube), but mostly I'm going to re-frame my smaller existing stuff. Existing art shown below. 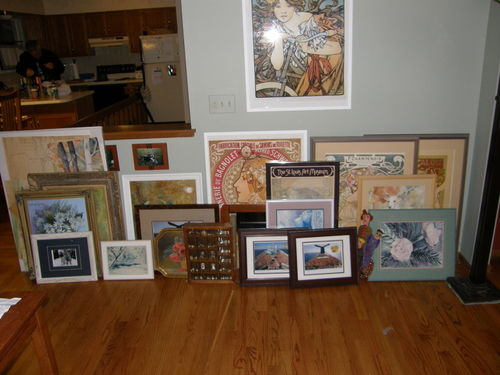 As you see, I stripped the walls of everything I ever bought or did or inherited. (There's your three people on the front row, Judith; they are not going to be confined to a frame, but I wanted all the walls to be a blank slate.)

Now, three of mine are old-school daisy paintings from my Great-Aunt Rosemary, and when I questioned if they should go up somewhere, Gary shrieked, "You have to! It's your Great-Aunt Rosemary! Your mother would roll over in her grave! If she had a grave. As it is, there are little puffs of ash coming out of her box!"

By the way, let me tell you, I was high after the big 90 percent off sale. I was elated. Today, I feel like a robber baron profiting off the poor economy.

Posted at 01:41 AM in In Which We Mock Ourselves | Permalink

Oh, please continue to feel happy about these purchases! If you hadn't bought them, they would have ended up in some auction lot and the lady wouldn't have seen someone so happy to get them.

A very, very long time ago, I was in London and ran across an original Mucha print. I think it was either 60 or 600 pounds. Might as well have been 6 million. I still kick myself for not buying it.

And when I was in San Francisco, there were original Disney cells for "Bambi" going for $35 a pop. And original Peter Max stuff for, like, $50. Ack!

Be happy you did this. Really.

Oh - those cabinets are beautiful. Bee-yooo-tee-full.

Yeah, I noticed the cabinets, too. Very nice.

As the economy tanks, there will be great deals for those who can still afford them. It's sad or wonderful, depending on which side of the divide you're on.

(I'm amused to see the dot of The Man right there in the front row.)

Becs - Well, The Man was the only black man on the entire cruise.
Silk & Becs - Thanks. I do like those cabinets, though they are packed twice as full as they should be since they have Moms stuff as well as mine.