One highlight of the trip in '95 was our visit to the Wild Animal Park near Toronto. We drove in and saw the sign below. 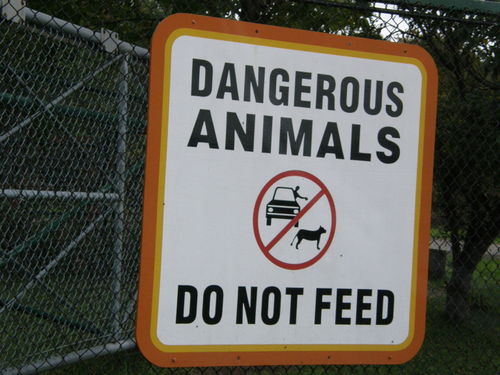 Like good Americans, we heeded the sign. And we drove through the park. And we noticed two things: 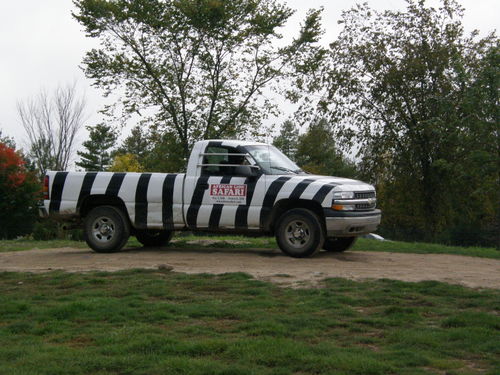 ...and the park guide did nothing.

Of course, we drove through, circled back, and got some popcorn at the snack bar, which came, I swear to you, in a box depicting a cartoon giraffe eating directly out of a box of popcorn.

So, then we were popular. We were pushing the Free Giraffe Crack, then. 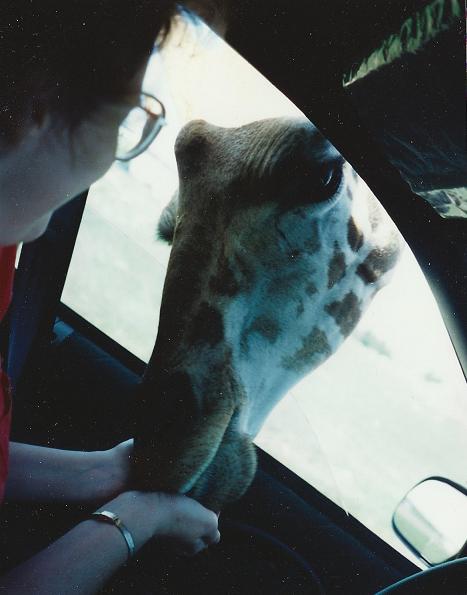 And the zebras loved us too. 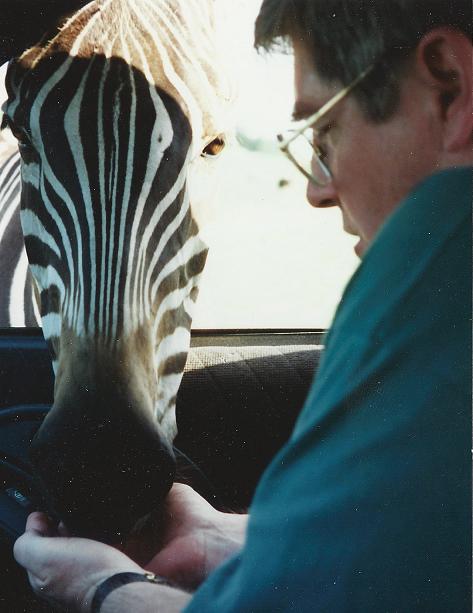 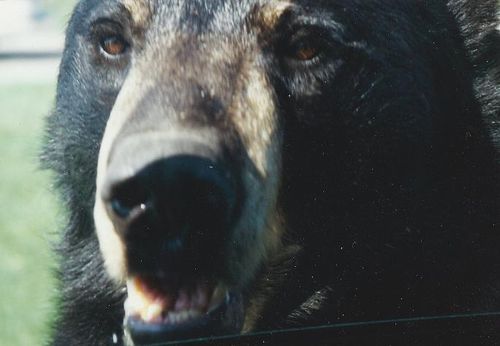 ...would have done anything for me and my popcorn. So friendly! 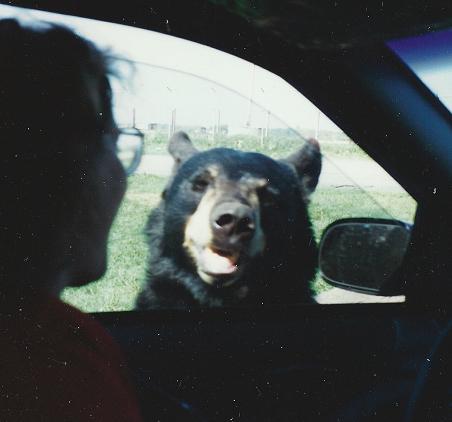 But of course the friendliest were the baboons. 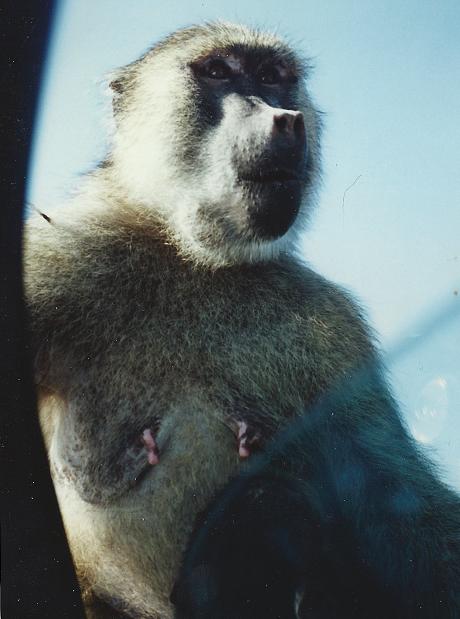 (That baboon makes me feel good about my breasts. We had a nice chat while she perched on the side mirror. She said, "A cyst like a lemon? On your what? Oh, that's disgusting.")

It was a good day.

However, we knew we were in trouble when we bought the popcorn and it was in a bag, not in the box essentially labeled "Giraffe Food." And there were many more of the zebra vans, and they would drive up to you and scream things like "CLOSE your WINDOWS!"

The strange thing was that we kept trying to feed the animals. I think it was because I knew I was breaking Canadian laws, not American laws. I wouldn't have been such a scofflaw in my own country. (Well, we did ignore some "Do not leave your car" warnings in our Saint Louis drive-through animal park, Lone Elk Park. There was an elk, just sitting there, a few feet away. We got out of the car and petted its fuzzy crew-cut antlers. It mercifully didn't ream our asses.)

So it got to be a game - Avoid the Park Police - because really, we don't have to listen to them because we're not Canadian. And because we are stupid. It added a little safari element. (Have the audio on for this video. The last line is "They have crap on their car!" )

Crap can briefly be seen at minute 1:07.

The crap came from the baboons. The baboons are popcorn whores. 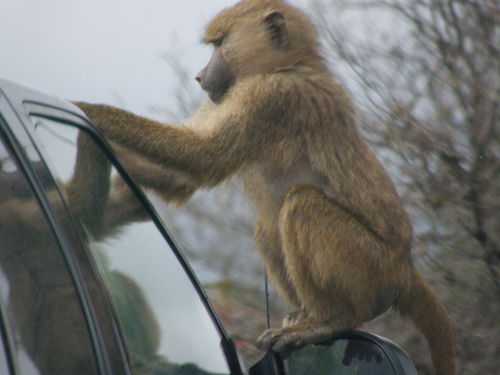 Some of them are popcorn pimps. NSFW! 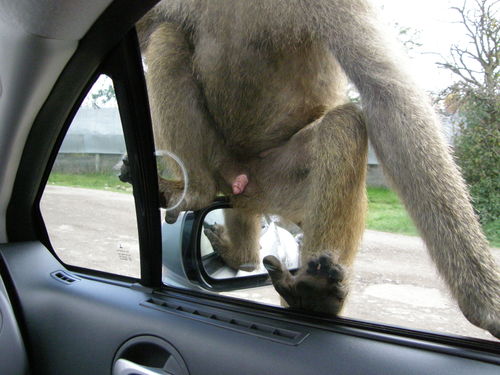 Evidently they even circumcise the baboons in Canada.

This was a baboon from the genus Giant Lumbering Baboon: 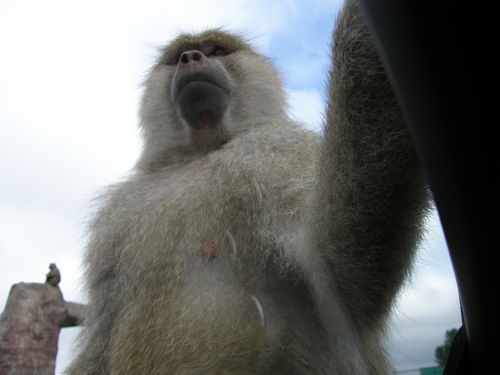 The baboon above was the giant baboon I was so intimidated by in the video below.

So, even though the animals are almost all Just Saying No to popcorn (the baboons still have a monkey on their backs) it was a good experience. It makes me want to take some Orville Redenbachers to Lone Elk Park and see what action we get.

My god, have you not seen the video of a black bear standing up and popping a car window with its front paws JUST LIKE THAT? Then CLIMBING RIGHT IN and shredding the seats as it slices through them like butter to get to the food in the boot (trunk)? Good grief!

Did the giraffes' long blue tongues gross you out? They only have the same number of neck vertebrae as we do, you know.

Big Dot - No, but did you not see that the car window is only cracked? I'm not putting out my hand to a giant black bear, sweet though he may seem. I did know that about giraffes, because I watched something called Animals Wild and Uncut (I think) that featured a noisy giraffe fight.

So where is this bear video?

I saw it at the Visitor Centre at Sequoia (A fed bear is a dead bear!) but there must be a YouTube version. I'll have a scout around.

Here you go - FF to about 3min20. Note that the window of this car was open a crack, oh right, like yours. The original old video I saw showed a bear just standing up and leaning on a closed window and it literally popped within seconds and the bear was inside the car ditto.

By the way, it didn't take me all this time to find the clip - I just had to whip out and buy a Lotto ticket to win the record pot of NZ$20million in about an hours' time. It's going to be such a headache, I can see it now.

"Zebra do you want some popcorn?"...now THAT'S something you don't hear or say everyday! hehehehe

Big Dot - That is a great video! Thank you. The fact my bear could have just popped the window and reached in makes him friendlier.
Becs - Ewwwwwww! I didn't see it that way. Ugh!
.75 - Oh, like "They have crap on their car" is a cliche.

Yay! What a fun entry! I have to go to Canada to feed popcorn to the baboons now!!

These pictures are AMAZING!

And Canadian rules still apply to Americans, unfortunately. I was caught in a back-seat seatbelt trap literally as my family was pulling away from the Penticton airport curb and we in the backseat were getting settled. $400! I paid it, because the officer intimated that I might never be welcome in Canada again. $400!

Erin G - Weren't you the one who passed on the chance to see the baboons when you were in Toronto? Hmmm?
TasterSpoon - Jeez! I'm glad we drove and didn't get entrapped at the airport curb. Good to know for future reference.