Gary: Everything Old is New Again 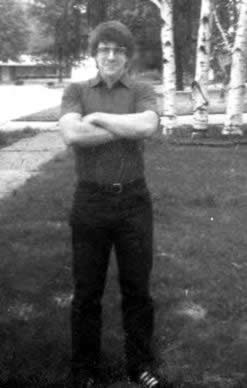 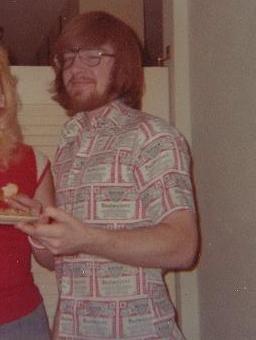 Yeah, he should be glad I didn't meet him when he was wearing Haute Brewery fashion and a beard. I would never have gone out with that guy. Plus he would have gone to prison for asking out a nine year old.

When Gary was of legal Budweiser-wearing shirt age, he got a job as an orderly. Every once in a while he'll come up with hospital stories only an orderly could tell.

Like, there was this OB-GYN who, after a birth, would take a fresh placenta and hurl it up to the ceiling where it would stick.

"Because he was a jackass! Then we couldn't use that OR for the rest of the day! Then I'd have to clean it up!"

I know. It seems suspicious, doesn't it?

Okay, here's another one. According to Gary, if you see an orderly wheeling a bed draped with linens through the halls of a hospital, or any big cart with sheets hanging off it, it's because the sheets are disguising a second platform where the dead corpse is. Because that's how they sneak the dead corpses through the hospital.

I don't know. I don't know if I would trust a guy in a Budweiser shirt.

Posted at 09:35 PM in In Which We Mock Our Husband | Permalink

Yes the draping linens cover the corpse. The placenta doc should be...something...how gross.

Minus the bear and the Bud shirt but with the long red hair? Oh yes.

Did Gary get bored and make a shirt out of labels? Because I don't know why anyone would spend money on that...

Weird, I recently read about that sneaking corpses thing somewhere else, too.

I so wish Gary still had that shirt and could wear it on the cruise.

Dude, that shirt is AWESOME!

Stljoie - Aha! Confirmation. I never knew if I should believe him. Do they ever leave them unattended? Now I want to peek.
Becs - I've never seen him with red hair. He was right though, he did have red hair once. It certainly was thick.
Angie - It was given to him as a gift. He reports there were dresses available for purchase too.
Melissa - Ooo - good suggestion for theme night.
.75 - They made dresses too. Well, they did once. Before you were born.

DeeDee and Irma - Gary says I should have captioned the photo of him with red hair "Firecrotch."