"I love our GPS," I said as we plugged in the Tom Tom and set off for the Go Gos concert at the Lumiere Place Casino.

Those of you in Saint Louis know why I did not want to get lost downtown.  Those of you in Australia (Hi! I can see you!) or the Philippines (Magandang tanghali po!) may wonder why I needed the Tom Tom GPS to drive to downtown Saint Louis.

For you, here's a picture: 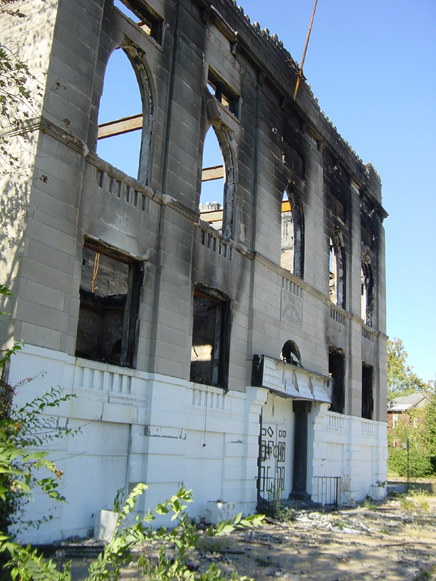 That's East Saint Louis. And, someone has been shot to death behind that building.

Happily, the Tom Tom lead us right downtown in her cultured English accent. "Take the exit right, then go straight on to the motorway." Mind the gap, please.

We easily spotted the newly constructed casino on the Riverfront. (Italics mine, for reasons that will become obvious if they aren't already.) 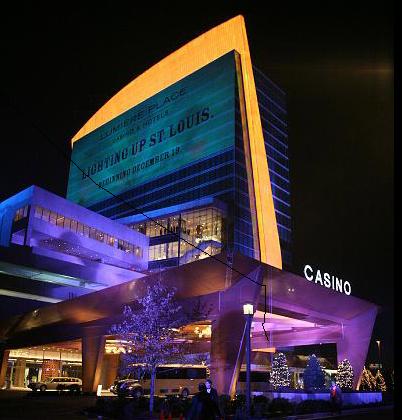 I turned on to MLK as Tom Tom instructed.

"Don't go over the bridge," Gary warned, as he always does, because that is where East Saint Louis is.

"Turn left." Tom Tom said. "Left" was where the casino was, albeit on the other side of a concrete embankment. "Turn left!" Tom Tom said, more emphatically.

"TURN LEFT! WE'RE GOING OVER THE BRIDGE! DO WHAT SHE SAYS!"

"I can't turn left. There's a concrete wall there." We sailed over the bridge toward East Saint Louis.

"Fuck, yeah," we agreed. We were all set to turn on Highway Three, then double over back across the highway, then head very fast back west. We had accidentally crossed the bridge once and survived by using this route.

"Take the exit right," Tom Tom said. Gary agreed. Or, more accurately, 'Gary screamed his agreement.' It was very tense in our car, Gary screaming, me slapping the turn signals hard and yanking the wheel. Tom Tom was placid.

"Turn left," Tom Tom insisted after we took the exit to Highway Three, which was suddenly just a two-lane road.

"NNNOOOOOOOOOOOO!" and he almost yanked the wheel out of my hand.

I followed the Tom Tom and she led us down a progressively dirtier dirt road.

"TTTTUUUUUUUUURRRRRRNNNNNN AAARRRRROOUNNNNND!" So I turned around and went back to the two lane road. I hissed at Gary, "Where should I go now? Where? You tell me. You know everything."

This was not well received.

"WHAT IS SHE DOING?" Gary screamed.

Then after another block, Tom Tom giggled, "Turn right." We were now in a weedy cobblestone plaza, or if you prefer, a vacant lot filled with cobblestones. Or, a twelve foot stretch of a six-lane cobblestone highway that had been abandoned by East Saint Louis after they ran out of legitimate funds. Or, The East Saint Louis Drug Mall.

"You have reached your final destination," Tom Tom cackled ominously.

Well, no. But I did stop listening to her after she stranded us in the cobblestone plaza. I began to listen to Gary instead, and he got us back to the highway. We were both pretty stressed by that time. I thought I had been expressing my anxiety fairly well, yet somehow Gary was surprised when we had to cross six lanes of highway to get to the correct exit and he screamed "WHAT ARE YOU DOING!" and I screamed back, "SHUT THE FUCK UUUUUPPPPP!"

Really. He wasn't expecting that.

At any rate, we got back and dumped the Tom Tom in the trash. Well, no, we didn't , but our relationship with Tom Tom is fundamentally damaged.

We calmed down after we saw the Go Gos (Gary's in love now)... 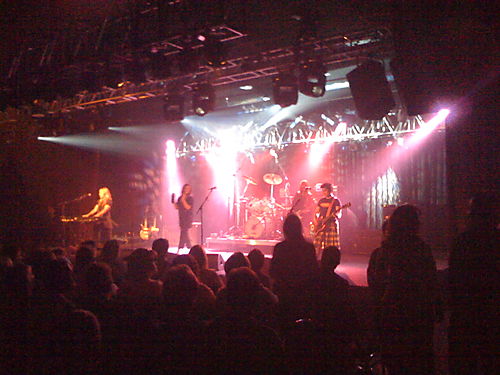 We realized that we saw no other cars or even actual living people in East Saint Louis. Maybe everyone is dead.

Posted at 09:09 PM in In Which We Mock Our Husband | Permalink

Jesus. My 74-year-old aunt drives us to Lumiere Place to play slots. We're going there next week. Shall I wave at East St. Louis for you?

I should add, instead of taking Tom Tom, you should take my Aunt MiMi.

3 - Mimi wanna see Go Gos? She should go this weekend.

my personal goal is to win the lottery and buy east saint louis and make it the new black mecca. I'll redo it extreme home makeover style and bulldoze all the liquor stores in seven days and have a hot black guy with perfect ken dolls ala ty pennington with a bull horn annoying I mean motivating us to completion.

I'll invite you over once I get it done.

My OH is in thrall to the steely authority of the Tom Tom, despite once misunderstanding his instructions and driving for an entire block along the light rail line through the centre of San Jose (NO ESCAPE! CONCRETE BARRIERS EACH SIDE!!!) Now he even uses it to direct him to my sister's house 20 minutes away. "It might know a better route," he explains.

This is exactly the reason why I have maps and use them.

It would kill you to know that I've voluntarily gone to those cobblestone lots along the river many times to watch 4th of July fireworks. Excellent vantage point. Little traffic.

May I suggest that next time you accidentally cross the river (as we all have) that you go to about the 3rd exit to turn around?

LOL...this reminds me a great episode on The Office when the GPS tells Michael and Dwight to drive into a lake! Anyway, the Go Gos rock...as do kobe beef burgers. ;)

I feel bad. I should have instructed you on how to get there as well as food directions.

While I really want a GPS, from my friend's experiences, I will still check to see where something is actually located via mapquest.

The worst part about going over the bridge when you don't want to -- and I've done it several times -- is that there's never a good place to turn around and get back to St. Louis. Scary.

Hope you enjoyed the show. :)

Raquita - Cool! Will you still be able to get the good snoots there?
Big Dot - I like it because I don't have to navigate. If Gary's driving and I'm in the car he expects me to think for him. Very tiresome.
Becs - I can't read a map and drive, though. OH - this is great. A funny exchange between BNL Lead guitarist and airplane-crasher (Ed) and your man Alan, as told by Willow who attended a recent concert and reported this exchange as told by Ed:

Then, e-mail from Alan Doyle, from Great Big Sea.

Subject: Bastards
I open the email, from Alan Doyle: "You headline-hogging f*cking bastards."
He goes on to write: "There are other bands in Canada trying to sell CDs you know. Why don't you guys take a f*cking holiday?"

Caroline - I am shocked and worried. Please say you were young and stupid.
Amy K - Ah! I remember that episode. Gary and I howled.
.75 - I don't know why I didn't use the iPhone, it would have been more up to date.
ajooja - I did enjoy the show! Not as much as Gary did, but that's to be understood. I like Jane best.

Buckminster Fuller who invented the geodisic dome...think the climatron at the Botanical Gardens...wanted to build a geodisic dome over East St. Louis and have it become the most enviable climate controlled place to live in the country...I kid you not. And the skyline of St. Louis is only to be fully appreciated from the eastern side of the river.

Kick TomTom to the curb and get a Garmin. And change the settings so it's a male voice giving the directions. It's probably just me, but I find the female voice to be somewhat snarky and condescending.

Oh that Alan! He is such a hoot!

The first person who screams in any car I am driving is promoted to walking. Banging one's hand against the passenger side door in voiceless terror is ok. But no screaming.

I can't believe it got you that lost. I'd totally sell it and get a Garmin. I rented a Garmin when I was in NM and maybe fell in love with it. Also, I got my directions to Lumiere from Mapquest and they're the same as friend 0.75's. However that does lead down a kind of scary dark street between two old warehouses.

Mapquest alert: it's all very well if you stay on the strip map it gives you, but if your kids erupt into a sudden squabble in the back seat at the exact moment that you should be exiting the I5 through LA and you take the next exit instead and try to circle round back to where you should be, and you find yourself the centre of attention of clusters of dodgy-looking people lounging on their front stoops in the middle of a maze of back streets, and you start to feel less like an adventurous tourist and more like meals on wheels, then Mapquest is no bloody use at all.

JO - That is great info about EStL. And I quite enjoy the skyline when I'm driving in from Illinois at 65 mph.
Melissa - We like the bitchy English voice. Then, when you choose to go your own way, she sounds so annoyed.
Becs - The story live: http://www.youtube.com/watch?v=jAcZdUYM5ss&feature=related
Sherri - Amen! Have you ever enforced this?
Amy in StL - Yeah, but Lacledes Landing scary, not EStL scary.
Big International Dot - "Dodgy" people? That's great.