Last Sunday, I went on a Segway tour of Forest Park.

I am a natural Segwayer. I found the secret, early on, which is to steer with your pelvis. Segway forward? Pelvic thrust forward! Segway reverse? Pelvic counter-thrust.  Warp-speed  forward? Stand casually on the device in the backwards-S posture I naturally adopt. I kept trying to twitch my hips left and right to steer but they devised it so you use a handlebar.

It felt so right. I was one with the Segway.

Gary was not one with the Segway.

He looked like a concerned chipmunk with his rear clenched and his head staring down at his little pair of hands white-knuckling the handlebar. The staff of Glide Saint Louis was very helpful, even when Gary couldn't make it up three out of four hills.

(The next morning at work I jumped into the middle of an unspoken conversation and greeted Friend #3 with a sigh and said, "Really. Who can't ride a Segway?"

"Who's having trouble writing a segue?" she asked.

And, unfortunately, she caught on then, because that could have made a really funny conversation. ("His butt got all clenched, that's why he couldn't write a segue."))

Appropriately, I have no segue. Here we are on the right:' 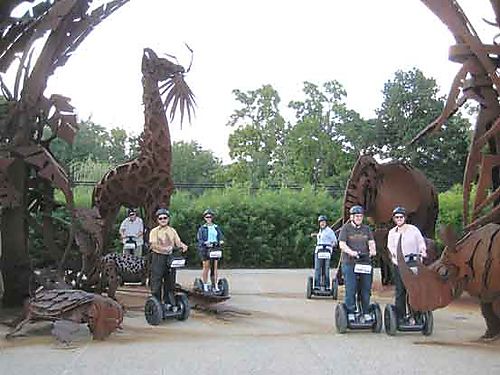 I'm hiding behind the rhino horn. If you would care to see even more unflattering photos of me with poor posture check out this page.

And let me applaud the people at Glide Saint Louis, they provide a great tour. There truly were parts of Forest Park I saw that I didn't know existed. There's a darling wooden bridge by Steinberg Rink, for example. And not only were the Glide tour guides knowledgeable, they were concerned that we inadvertently over-tipped them and called to alert us afterward. (The twenty tucked into a pile of ones made them suspicious.) This gave Gary a chance to be Lord Bountiful, which he loves, so everything worked out well for him.

Posted at 09:18 PM in In Which We Mock Our Husband | Permalink

When you guys are really old Gary will be one of those oldsters who flips himself over in his Hoverround chair. I can see it coming.

That's some nifty manoeuvring there for those poses. Is there such a thing as Synchronised Segwaying? Because you guys look like naturals.

Gary may not be able to ride a Segway, but can he write a segue?

Or recite a soliloquy?

Hey! Thanks for stopping by my blog and for the kind, positive words. I'll be back to read more of yours.
Abby

Looks like you guys had fun!! I've never witnessed a Segway tour in motion, must have been a little humorous to see.

BTW, thanks for welcoming Abby. Very sweet of you.

Zayrina - (He did flip the Segway.Shhh)
Big Dot - I think there will be a Wii Fit Segway game.
3 - Yes. He writes really well, it's just too detailed sometimes. All emails are three paragraphs long at least.
Big Dot - Tch. Everything he says is a long soliloquy.
Abby - Hi Abby! A pill is on its way.
Lisa Emrich - Someone on a bike quacked at us and said we looked like ducks.