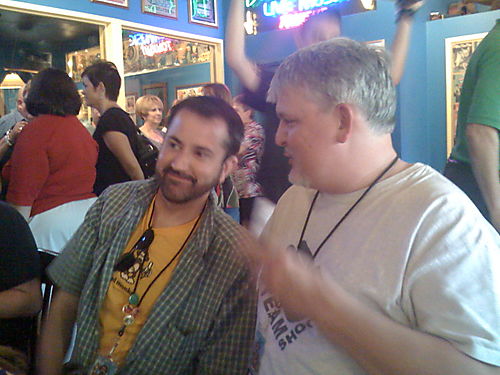 Dave is a man of mystery. How does he travel? Who does he work for? Who are his friends? What is his orientation? Where is he at any one time? If you've read his blog, you know none of these things. I know the answers. I'm not telling, because I respect people who have self-control and restraint in their self-expression. Unlike me. The Wife of Bath.

Dave showed up with lanyards and playing cards and buttons, but not enough buttons, prompting the plaintive "I want a Penis Salad too!" -- only not from me, and how I managed to miss making that that particular age-and-otherwise inappropriate comment I do not know. I did laugh lustily, though.

The venue was Blueberry Hill ... 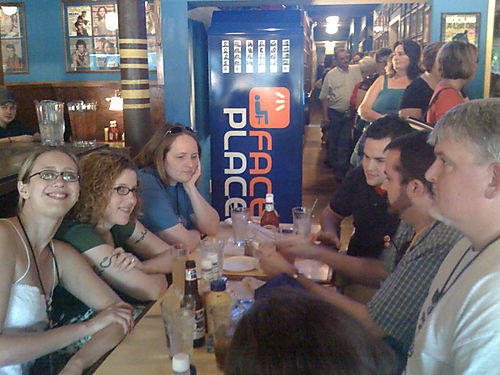 The only person you can't see in the photo above is Carlos, my drag-racing buddy, but here he is in front of the satyr. Our guest of honor, Dave, said "Mini Bundt Cakes. MINI BUNDT CAKES. Who's with me!"

"Ted Drewes," we said. "Oh, and make some Gooey Butter Cake when you get back home." 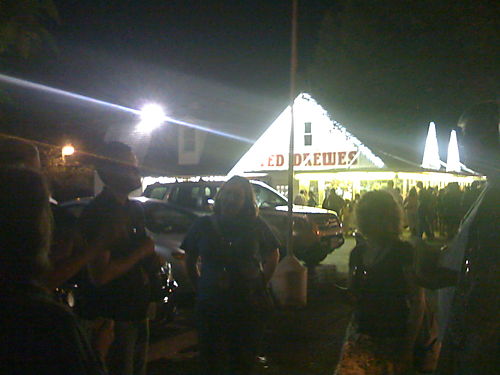 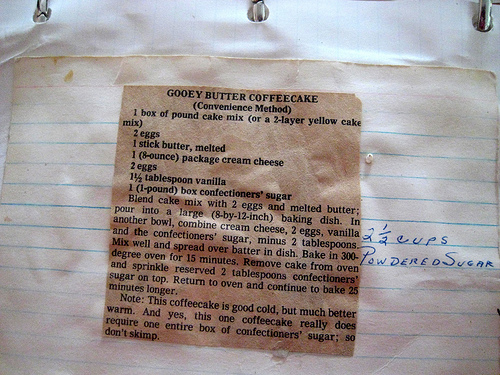 Ted Drewes was surreal.  At one point, an elderly woman went down. She lay on the ground until the ambulance came. But, she recovered, walked it off and was able to get up on the gurney with assistance. This, of course, meant we were free to make sick jokes.

We were able to see our city through Dave's eyes, and I was able to join in the conversation by starting every comment with "About twenty years or so ago..."

It was a lovely evening, overall. Thank you, Dave and Ajooja.

The chick in green is cute. And a brunette! You may be on to something.

Woo hoo! Could I look any fatter in that first picture? Jesus.

Thank you so much for coming. I wanted to talk to you more than I did. I'm sorry for that. I'm not used to trying to fit a story into an eight-person table. ;)

BTW, .75, the chick in the green is even more beautiful in person. I'm not a boob person at all but I caught myself looking at them more than I realized. :)

Oddly, we did talk about that. Go figure.

Ajooja...thank you for having excellent taste and agreeing with me. :)

It was very nice to meet you and a fab time had by all for sure. :) I have your blog saved in my rss reader now.

Looks like fun! Nice to see Ajooja. Hi, Ajooja! Ted Drewes always reminds me of high school, which was about 20 years ago.

.75 - Well, the chick in white goes both ways, and the chick in green was joking with her about it - or maybe not. She was a doll. And she likes Breakfast souffles, just so you know.
Ajooja - That is a very, very unflattering photo of you. You are much taller than that photo would suggest.
.75 - If you are nice to Ajooja he might set you up. Green Shirt (aka either spants or elipsis) was the one who was familar with Novaks ... but she has a child.
Gina - I showed my husband the photo of your tattoo - that's probably the prettiest tattoo Ive ever seen.
Caroline - See, Ajooja, people like to see your face.

hahaha As long as Green Chick is open-minded, that's a good start. And I like kids. :) Ajooja probably wants first crack but I'll keep notes about breakfast souffles just in case!

.75 - Ah, Ajooja has found complete fulfillment with Mrs. Ajooja.
Ajooja - She's Friend #4, seen in this link on the left side dressed as a Harvard comma in a cap and gown:
http://mocklog.typepad.com/.shared/image.html?/photos/uncategorized/everybody_4.jpg

I made that coffee cake tonight. It's amazing.

Erin - I've never had a fresh-baked one right out of the oven. I like the corners and edges best. So, you see why we served it after Mom died. Ultimate comfort food.

Sounds like a job for the magic brownie pan!

Erin - I read this, hopped up and went to store to buy supplies. It is cooking right now. You are a genius. But, that recipe is pretty ample - I have a lot of batter left over. I'll let you know how it is!