The Olympics remind me how uncoordinated I am. Michael Phelps chides, "Ellen, how can you be afraid to put your face underwater?"  The Chinese Fetal Gymnasts sneer, "What do you mean, forward rolls are all you can do?"

However, the U.S. fencing team nods politely at me, because I have disarmed my opponent in a fencing match. Well, "match" is inaccurate, it was in fencing class. And before you picture me in boarding school fencing with my BFF the Viscountess Whatevah, it was the fencing class at the Y.

The Y was able to pick up a fencing class because our community had a discontented, expatriate Prussian fencing instructor. Or, he might have been German, affecting Prussia instead because then he could scream things like, "Ellen! You do not have the blood-lust! Go for the kill!"

The Prussian was frustrated with me because I, in the words of the Chrysler workers I taught later, was "suspended different." I remember one day early on when we argued: "Ellen, just let your arm dangle." "It is dangling." "No, don't twist it like that." "I'm not twisting. I'm dangling." "Here! Give me your arm -- Oh. Well, I suppose that's the best you can do."

My awkward suspension is what enabled me to disarm my opponent. My opponent, a Boy My Age, was that rare combination of cute and smart. He and I assumed the stance: 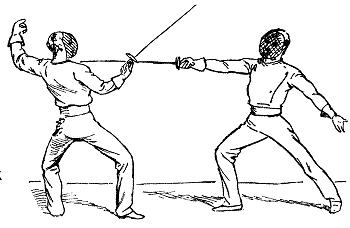 ...and the Prussian barked "Ellen! Put your hand behind your head -- "

"What are laughing at?"

Just as Cute Boy bent over in hilarity, "En-garde!" the Prussian barked. In a flash I executed the move we'd been practicing, and the foil flew out  of Cute Boy's hand and across the room.

He fell on the floor and giggled, "Hey! Not fair! I was laughing. I wasn't ready."

I stared at Cute Boy, hypnotized. He wasn't smart anymore, but he was somehow still cute. Huh. Really cute.

"Ellen," the Prussian sighed, "you do know what the goal is in fencing, don't you?"

"Oh! Touch!" I said, and poked the Cute Boy with my sword.

The teacher just sighed and shook his head and mourned, I suppose, for Prussia and brown-shirted teenage girls.

In the modern age, if you encounter me on the street today and I am carrying an umbrella, you should know I am primed to execute a bind on your ass at any moment. Just watch it.

Posted at 11:37 PM in In Which We Mock Ourselves | Permalink

My boyfriend likes to pretend fence anytime he's carrying a non-collapsible umbrella. It's one of his less endearing habits to try to do it with the collapsible kind too.

I think it's awesome that you can fence!

I am now never going to look at an umbrella the same way again.

"...to reconcile my Dad's respect for athletics with Mom's respect for Trollope novels?" Please excuse me while I wipe the tears from my eyes. I actually snorted with laughter at this line. I'm sure you did your parents proud, even while wearing a brown shirt.

And even with your freaky thumb! You are such an inspiration.

You can do a forward roll? Ossum.

Amy in StL - How does he feel about the empty cardboard tube after the wrapping paper is gone. Thats always a foil or a horn in our hose.
Sugared Harpy - Well ... the only thing I remember is the bind move. And did you notice the Olympic fencers didnt have to do the graceful hand thing? Not fair.
KC - If you snorted I'd think you should wipe your nose instead.
Becs - I know. I'm the polydactylism poster girl.
Shania - Well ... I think the last time was in college.