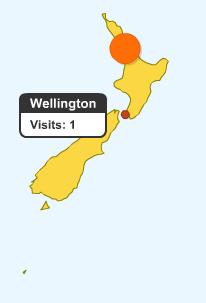 This is what happens when you get hooked on Google Analytics.

If you don't know, Google Analytics tracks users to your website and reports how they got there, how long they stayed, and the like. The best part is the map feature. This, for example, is New Zealand:

In contrast to Wellington, there is another dot in the north. Now, that's a Big Dot. In fact (I hope this doesn't make you feel self-conscious, BD) but this is Big Dot in New Zealand. Everybody wave at Big Dot. No one has the slightest idea what city you are in, don't worry.

Because each hit looks like a person, it is futile to click any big city, because you can't anthromorphize the multiple dots. It is only satisfying if you look at a big expanse of state or country and there's someone out on the prairie. But then, here's the danger, you can click the city name at the bottom and zoom in on that city and see daily details. For example, see these two cities in Oklahoma? Not Oklahoma City in the middle, the ones in the upper right. I checked out the dot on the left and saw we were cool until June 23.

I wondered what I'd said on June 23 to piss off Big Dot on the Left, and then on June 25th things went from zero to daily in the Rightmost Big Dot. "Aww" I thought, "Big Oklahoma Dot doesn't hate me. Big Oklahoma Dot just moved." Is that creepy? If so, I'm sorry,Big OK Dot. Notice I didn't give your city name away; I'm trying to protect your identity.

But I don't want to protect your identity that much, Big Dots everywhere. I do have a spreadsheet. I have about 50 Big Dots, but only 16 Big Dots tentatively identified.

I'll be watching you. This is creepy, isn't it? It isn't like I'm fantasizing that big Tucson dot meets big Tempe dot and they get married (but they won't, because I'm reasonably sure I know who they are). I've changed my mind, I don't want to know who any Big Dots are. I'm creeping myself out.

UPDATE: Yes, it is creepy. Okay! I apologize for stepping over the line! You are all just a vast mystery to me.

Posted at 12:10 AM in In Which We Mock Ourselves | Permalink

So, I've been Held Up As An Example - it's been a few years since that happened, and I can't say I've warmed to the idea in the meantime. I've always been uneasy about the statistics and now I know I've been rumbled: yes, I have no life, I check in more than once a day, you're my guilty secret and now I've been outed. 'Daily details' - what a chilling phrase. 1984 got here at last. In my defence, the frequency of my visits is directly linked to what I might call writer's block if I were feeling grand, but actually boredom is more accurate. It's so easy just to click on that toolbar button...

In other news, my OH burst in the door tonight singing out 'Close your eyes!' and dumped an Iphone in my lap. Thanks to the dateline, I was one of the first in the world to get one. And you know what I did? Gave it back to him, because I like my little clockwork Nokia and get bamboozled by technology. Which is absolutely what he was counting on. Nul points, as they say in the Eurovision Song Contest.

I admit, I read you every day. I'd comment more often, but my brain is often frozen early in the a.m. and doesn't unlock anything good until way after the time has come and gone to do so. Stupid brain.

Do you have my dot identified?

BD - Now, you had already given up your anonymity by owning Flight of the Conchords. And you already got (and gave back) an iPhone? Lucky, being next to the International Date Line.
Heidi - Do you SEE the list on the left of the 86 blogs I read every day? And my brain is still frozen all day long.
Melissa - Yes.

YOU HAVE A SPREADSHEET? No way. Wow, that's amazing.

I'm probably a medium sized dot in the bayou. Just kidding, I'm in New Orleans proper. None of that Metairie crap here.

Ha! I read you daily but don't always visit, usually only if I have something to say. According to my own meters I fluctuate between being recognized in two nearby locations, neither of which are the actual town I'm really in. Go figure.

Hee Hee, I'm totally going to start going to your site when I'm out of town. If only I'd known this earlier, I would have given my friend your URL because she just got back from Amsterdam, Istanbul, and Bishtek.

Ha! My dot moves about the UK, depending on whether I log in at work or home or on the road. I wonder how many readers you have from Blighty though?

I'm a fellow analytics addict - I can remember a quiet YAY! when I discovered I'd picked up a Montana reader. Tell me - have you got one yet? ;)

Philadelphia, PA girl here, did you find me too? Oh, I'm mostly a lurker...

I just posted about the huge time suck that is statcounter. I've just discovered it and I'm glad I'm not the only one obsessed. I don't think it's creepy, just human curiosity. Now if I use google map images to your front door? That's creepy.

Those Oklahoma dots look suspiciously like Tulsa. Which would be me. Hi!

My biggest dot fan is...me. Is that pathetic? Of course it is. I have some mystery dots myself. The cool thing is that I can track one of my faithful readers' many travels. All of a sudden, I have a dot in Prague! No, Rome! No, Hawaii! I know who I hope some of the dots are, but I dasn't say.

See? So untechie that I can't even spell iPhone properly. And it's not really your fault that I'm such a big dot, I know it's because I overindulge, but it wouldn't happen if you weren't so addictive...

I move around a bit, too. I'm going to be away next week and then again in August. See if you can guess which new little dots are me.

I think maybe you must have more than one dot in Tucson, since you think you know who Tucson and Tempe are and I don't think you've ever met me. :)

I feel so exposed! Okay, okay, I've been hanging around a lot lately because I'm in the middle of a big doc review and catching up on the blogs I missed over vacation is my little motivating treat. And I haven't been commenting because doc review sucks what little wit I have out of me.

I tried to make Ace TiVo Moon Missions but apparently we don't get that. Fortunately we have eight episodes of When We Left Earth and The War stacked up to keep us eating in silence till September.

And Ace has gone by the Apple store twice today but the line is still wrapped around the block.

Can anybody do this Google Analytics thing? Never mind, I'll just google it.

You know, my mother is named Dot.

I'm impressed though. I can't figure out google analytics for the life of me. (And, alas, I'm not sure that you've helped...)

All - (especially shadowdncr- Hi shadowdncr!) My spreadsheet is ALL WRONG. You all remain a mystery.

And for Analytics, first log in. Then GA supplies a bit of code you need to stick on your blog (it's in Region on my sidebar). Then you go back to GA after a day and ignore everything except reports, map view.

What, no curiosity about the dot in Nicaragua?

Ha! If I read your blog from work, and I do, my workdot is in a completely different state from my homedot. So there! :P

And what happens when I come here, then go to another blog through one of your links - am I still clocking up time for you? (Yeah, still looking for ways to explain away my size - 'big bones' syndrome.)

As an aside, I'm finding it's very hard to get due sympathy for a big and painful blister on one's bottom lip caused by licking a hot spatula. Damn you, ricotta and honey hotcakes!

Funny, I haven't been checking in as much lately, simply so my sitemeter won't rat me out as the most frequent visitor to my own site! If someone goes onto to mine then yours, sitemeter tells me all about it. You can run but you cannot hide. I am your main Tucson dot, though, as you well know!

Well I'm a Fort Worth dot and I ain't afraid! I don't think all this is any more creepy than reading the (sometimes) personal details of strangers' lives on the internet.

Jamon - I had all kinds of Canadian and London dots. They have evaporated in the past few weeks. I can't see you at all. I've got a Billings Montana dot, or at least I did.
NicaKnit - You were the ONE dot on the spreadsheet I was sure of!
Jammies - I have you as Cleveland, ohio. Am I close?
Big Dot - I didn't understand at first why you are self-conscious about it, but now that you point it out, you are swamping Northern New Zealand. I think if you had competition you would look smaller.
Sherry - Yeah! were you SandySomething OK? I wondered where you went.
Judith - Meet Shadowdncr, Shadowdncr, have you met judith?
jessica fantastica - Well that isn't creepy. But what if you tracked them on a spreadsheet?