On the way back from the BNL concert (where we saw a very professional performance, considering), we stopped at Marengo Cave in Indiana. Because the Voice in my head told me to. (Snort. I kill me.) Actually, we stopped because the roadside signs told us to.

And it was there I found the greatest testament to editing in North America. 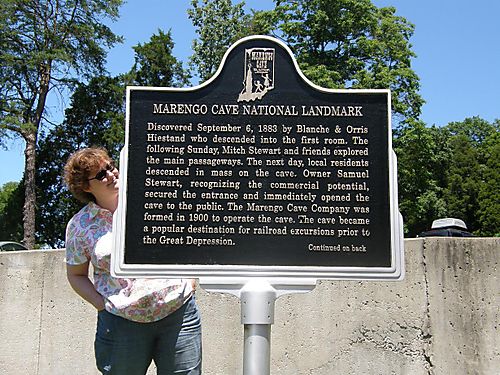 In honor of the sign, I'll keep this brief.

First of all, the cave entrance and gift shop featured a time-line that began with "Earth Created." This was to offset the suggestion that the earth has been around for the millions of years it took for the cave to form. This didn't surprise me, given that it appears that Indiana has put "In God We Trust" on the state license plates, just in case the atheists get it off the money.

Having seen two caves now, I can extrapolate and make assumptions about all caves. All caves have a puddle that is only six inches deep, and it is called "Mirror Lake."

Finally, Crocs are the worst spelunking shoes ever.

I love that cave, but somehow never noticed the timeline before. Both hilarious and painful!

And don't get me started on those damn license plates. :P

When I was in Greece, we went to an orthodox church that required women to wear long skirts. So we packed them and put them on over our jeans and we seriously looked like homeless people.

There was a big sign over the door of the church translated to English, telling us we had to wear skirts, only the last line had a typo. It said, "Thank you for your understating."

There was another classic typo somewhere involving the word "fork", but I can't remember what it was. Greece was the best for weird signs.

Who would've thought that about Crocs?

AND in unrelated items: So last week I was working at the part-time gig at The Body Shop and this man and woman came in and he was asking questions and they both had LUSH bags and I thought of you and Gary.

How do you put that sign together and not notice that? Hilarious.

Veolicbadgergirl - Oh, let's get you started. Are those the official plates? Seriously?
Katie - I like the idea of you in skirts and jeans, so not understated.
Candy - I noticed that they didn't give God credit, too.
Autumn - Yeah, you'd think Crocs would be perfect, but they slipped everywhere.
Kim - It would have been funnier if the letters had gotten all tight and scrunched at the end.