Post-its From the Great Beyond

The day began with a huge fight with Gary. It's my fault, I'll often find that I'll work something out in my head, make a decision, then Gary will submit to me all the same arguments I had worked through, and it's frustrating, because shut up, shut up! I already thought that out. Just do what I say. (Bongo! No talk back to Missy.)

Gary's response was "Your Mom is dead! We have no room for her in our life!" except the actual words he used were, "Stuff means furniture! I like our furniture! You want to throw out all our furniture in favor of your Mom's furniture!" But I knew what he really meant.

Anyway, after much crying and consoling and shortcake at Bob Evan's we went to pick up some remaining tiny microscopic knick-knacks and writings from Mom's house. And it was fun, because I kept finding notes from Mom.

In the china cabinet where she kept Great-Aunt Rosemary's painted china I found a letter from Rosemary talking about how she'd worked to get china painting classified as art instead of decor. "Why I didn't know that, Mom. Thanks! And thanks for putting it right by the china."

In the den, attached to the top of the 1950's shoe shine box was an ad from Organized Living with a reproduction box on sale for $35. Good to know, Mom. Thanks.

But the best part was when I found an old issue of Life with this note: 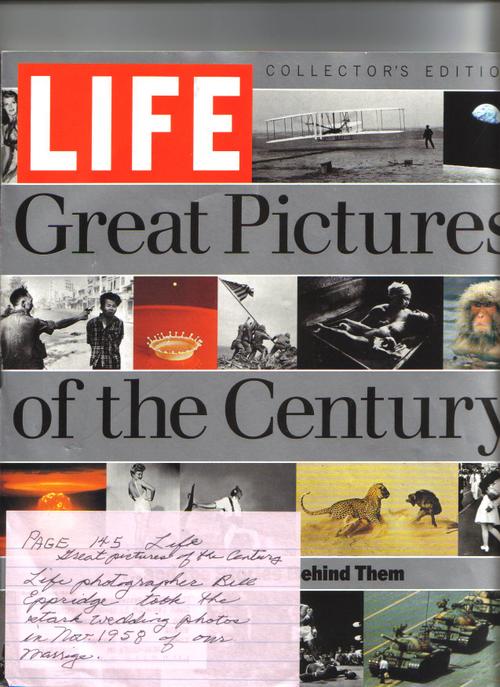 "Who is Bill Eppridge?" I wondered, and turned to page 145, and saw some photos of heroin addicts. "Cool," thought I, "She and Jerry must have met him in Journalism school." As it turns out that is true. Or at least he went to Mizzou, graduated two years behind Mom and a few years before he started covering Bobby Kennedy for Life and took this photo: 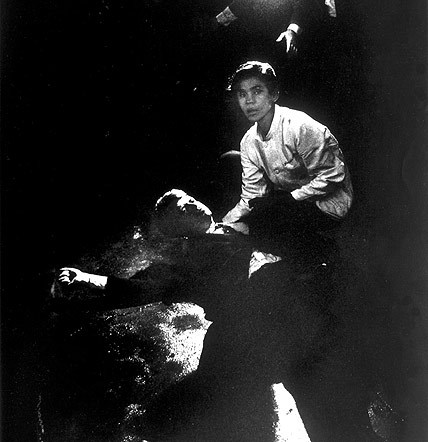 But I didn't know that until I googled him tonight. Before tonight the only Bill Eppridge photos I knew were Mom and Jerry's wedding photos: 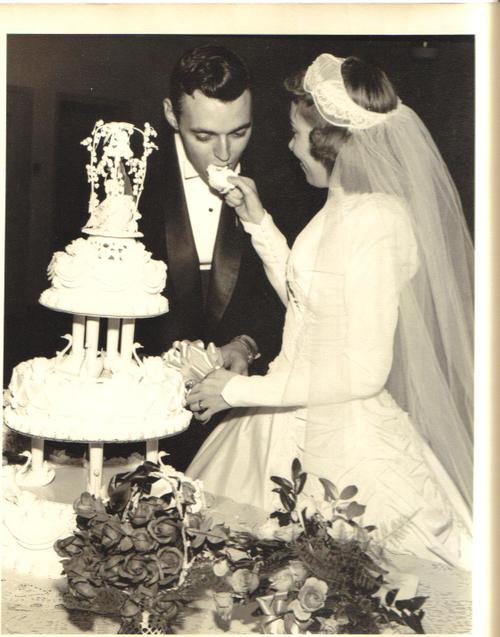 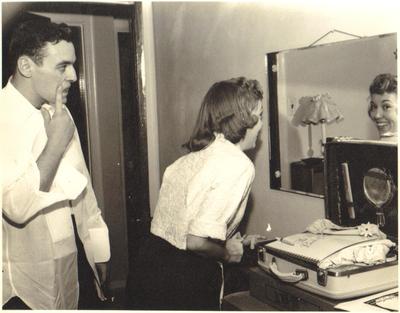 The one above was my grandmother's favorite. Jerry's worried about the bags under his eyes, and Mom has this great "I'm gonna get laid!" smile in the mirror, but Grandceil particularly enjoyed teasing Mom about the great vat of Vaseline in the back corner of the suitcase. (Click for expanditure!)

I'm sure it's that eye for detail that made Bill Eppridge a famous artist.

Posted at 01:12 AM in In Which We Mock the Queen Mother | Permalink

The really scary part is that once upon a time, women used Vaseline for makeup-removal (alternative to cold cream, which is mostly the same as far as I can tell) (I read about it in this month's issue of Real Simple and was shocked, SHOCKED, I tell you.)

Is there an illicit copy of Last Tango in Paris in that suitcase as well? QueenMum never stops surprising me.

My goodness your mother was beautiful!

And for the record, Vaseline is also good for diaper rash.

The wattle doesn't fall far from the tree, I see.

Caroline's right: your mom was a knock-out. :-)

Taster - I know! It made my yesterday and my today.
Sherri - I used Vaseline to take off my mascara in high school. Now I just don't wear mascara.
Candy - You and my Grandma would get along well. I was shocked to hear she would associate Vaseline with sex.
Caroline - She's a cutie.
Friend #3 - Oh, HER wattle was from two huge dimples so deep they met under her chin. I have no such excuse.