While Mom's instructions said specifically that she be cremated AND the funeral home should dispose of the ashes, the funeral home refused and we now have a plastic box of Mom that needs to be disposed of.

I have a few options.

Dad's ashes were buried under an azalea.

(An aside: as many of you know, this isn't entirely accurate. After Mom got Dad's cremains, Dad's mom made a fuss that she had this burial plot and Dad should be in the plot next to hers, ashen or not. Mom "lost the fight" and, with a straight face, handed Grandma a box full of Dad. Or, full of half of Dad. The other half of the ashes she buried under the azalea bush. Shh. It's a secret.)

Thankfully I just re-read Mom's blog and found that the Dad azalea died, otherwise I would have dug up the wrong azalea looking for Dad. I'm glad to see Dad's now under an easy-to-transplant sedum: 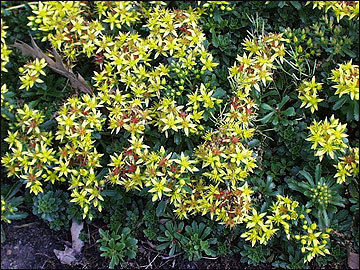 Since we are selling the house, my plan is to take the dirt/Dad and the sedum and move it to my garden, where I will till Mom's ashes into the soil and transplant the sedum/Dad there.

Pseudo-Cousin Chrissy told me what they did with her Uncle Ollie's ashes. Ollie was a world traveler and rabble-rouser. He was somehow involved with an organization that protested the Veiled Prophet by crashing the Ball and unveiling the prophet. And that's not the half of his exploits. He was such a character I didn't even know he owned a jazz club called the Holy Barbarian. So, anyone who visits a foreign land gets a medicine bottle full of Ollie. The goal is to scatter Ollie across the globe.

A Google Search tells me this:

"Jewelry: Keepsake jewelry has been developed as a way for individuals to keep a small portion of cremated remains close at hand as a tangible source of  comfort. The jewelry may be displayed in a glass dome or worn as a pendant. Keepsake jewelry can be made of brass, pewter, silver, gold plated or 14k gold. It is available in a variety of styles and is yet another way to personalize a loss."

It seems like I should be able to incrementally sneak her into Shaw's Garden, like the prisoners did with the dirt in the Great Escape.

Yes, I know this is disrespectful. Mom wanted to be thrown in the crematorium dumpster. It's not like I'm considering smuggling her into the iron lung on display at the Science Center.

Posted at 11:49 PM in In Which We Set Ourselves Up for Mockery | Permalink

When my friend Bonnie's dad died, we ended up taking some of him to Europe with us in a medicine bottle. We put him in a cemetery in Vienna, where Beethoven was buried. Actually, if you look closely at the picture in my namelink, you can see him on the plants at the base of the tree. Apparently this is illegal, which kind of makes it cooler. Daniel (my little brother) and I are going somewhere this summer (probably Europe), and I'd be willing to bring some of the Queen Mum. Is that a weird thing to offer?

Do you suppose a little part of her would like a stroll through Central Park?

You should just start making brownies and putting a little bit of her in with every batch, and then just send them out to everyone.

I would be happy to host a little bit of the Queen Mum in my herb garden in Wisconsin. I think my husband has bits of dead parent in his dresser drawer. Which is less creepy than having bits of ex-wife or worse, current wife. (moi)

I'm going to Hawaii in July - I'm thinking the QM would enjoy becoming part of that landscape.

Also? Keith Richards - not drummer Charlie Watts - was the Rolling Stone who made the claim to snorting his dad's ashes and then retracted the story. But, you know, it's KEITH.

The ocean? You know, burial at sea.

Maybe you could have her made into an hour glass?

When I die, I want cremation immediately. My husband has been instructed to purchase high quality chocolate and present it to the mortician. It is to be placed in my mouth just before I am shoved into the oven. Ahhhhh melt in your mouth chocolate mmmmm.

Ollie was a dear friend of ours..my niece inherited his false teeth. The world will be a better place. Scatter on.

Also my husband would like his ashes taken to a potter and incorporated into a piece of art...I think a pot to put my ashes in would be nice.

You can turn QM into a beautiful reef in Hawaii! I saw something on TV about it once. I'm pretty sure it wasn't an infomercial. Pretty sure.

I've always thought the diamond idea was morbidly cool. But there's just something funny about sneaking a little bit of her into Shaw's garden.

And a funny story about the reefs: Someone wanted to do one in South Carolina. Artificial reefs require a permit from the federal gov't and from state agencies. When they called me to find out if they needed a permit from us - I was new so I had to ask my boss - she replied, "Well, they can't just go puttin' people out there!"

Hmmm, maybe you had to be there for it to be funny....

Wow. You had a relative (even a pseudo relative) who has been described as a "hipster". And Mormons!

Other than my grandfather being a child molester, the oddest relative I can come up with is an uncle who picked his wife up and put her in a sink full of dirty dishes. Or on the wood stove. I can't remember which.

My dad was cremated and we sort of half-joked abut taking his remains and putting them into some clear plastic fishing bobbers and lures. Both my dad and my brother love to fish. Dad's mom was appalled but we all thought it was kind of neat (Dad included).

Erin - Yeah, I even worry about putting medicine bottles full of medicine in my carry-on. I wonder if TSA agents just ignore the bottles of ash?
Becs - You know, I bet Mom would prefer a publishing house to Central Park...
Avitable - She's kind of gritty. Doesn't make for a good brownie.
Heidi - Oh! That's so nice of you.
Catherine - Anywhere by Maui? And: you forget Keith Richard's stint as drummer for Fingering Husband's Rectum.
Magpie - She can't swim (polio arms and all) so I can't picture that.
Zayrina - The irony! An hourglass! Whoa.
Erin G - Can't beat it for convenience. Except the dog would pee all over it.
stljoie - No WAY. How did you know Ollie? He was in the RFT once, quoted as a man on the street. And I love the idea of your ashes in a bowl made of husband's ashes.
Melati - I was thinking about taking her to the beach by the Hyatt in Maui.
Amy in StL - Don't have to be there, I can picture it. It is funny.
Becs - Well, that just means you're the one your relatives brag about.
Kim - Oh, that IS neat. I understand I could make Mom into a pencil (true) but I'd never use it.

We're going to be on Oahu, not Maui, unfortunately, but I am planning on going parasailing! What do you think?

I can arrange a publishing house. One which we can discuss offline. Random House. McGraw-Hill. With some finagling with Our Trevor, maybe Scholastic or Harper.

I have to say, though, Offline House is NEVER dusted while Random House is kept absolutely spotless.

But yes, I would be very happy to help. And if my relatives talk about me, it's usually to say, "Has anyone heard anything about Becs lately? It's been (3) (5) (17) years since we heard from her."

I passed this post on to Ollies brother Virgil in Ohio and he would love to contact you... vgm1928@zoominternet.com
The story of Ollies life would really warrant a book...he was outragously wonderful and fun

My dad's instructions are cremation, ashes in a cardboard box. Then to rent a small airplane and sprinkle the contents of the box high in the sky.

I also like the bush idea. You know how hydrangeas are blue in alkaline soil and pink in acidic soil (or maybe vice versa)...that'd be cool, if you had a bunch of pink hydrangeas and one blue one that makes you think of Mom.

Catherine - You parasailing: rocks. Mom parasailing: nooooooo.
Becs - Ooo! Secrets revealed.
Stljoie - Joan and Virgil, right? I think Chrissy let Joan and Virgil know about Mom.
TasterSpoon - I'd have to do a pH test on the ashes, I guess. All I know is no plant I've transplanted from Mom's has survived in my yard.

We're doing lots more than just parasailing. I could even do a little off the California coast and in Hawaii so that she could be on both sides of the Pacific. I'm just sayin'.

Catherine / Becs - email me your addresses. I think Mom would be glad to meet you. She followed both of your blogs.

We surreptitiously sprinkled my mother-in-law's remains in our garden. She was not-so-affectionately referred to as "Salty Pat" in her day. I have not been able to get a tomato to grow in that garden since.