In Which Gary Changes His Underwear

Gary came into the room Thursday, while I was on the phone, hooked his thumbs into a worn-out hole in his pants, and silently tore his pants off his body.

He's done this before. Usually I applaud and gush, but as I say, I was on the phone. 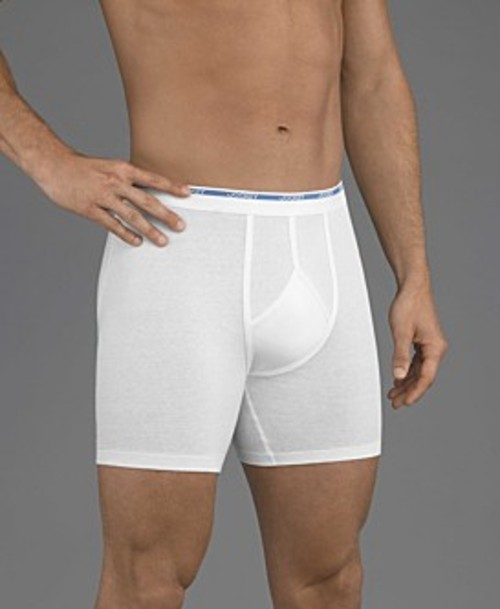 "Okay," I asked, "Why are you wearing Mormon underwear?"

The story begins when Gary was walking up a slushy hill to get to work, and slid face-first back down. His coat, shirt, pants, and underwear were drenched in mud, so he drove to the nearest mall to buy new clothes. (It's okay. He needed to replace the pants he tore up Thursday anyway.) When he got back to work and changed, he found not only that the three-pack of undies he bought were not all white (one red and one black were hidden in there), but that they were these girdle-shaped underwear. Evidently they are Jockey Boxer/Briefs. For the man who no longer takes gym class.

Posted at 11:51 PM in In Which We Mock Our Husband | Permalink

Maybe I've got a thing for mormons or man girdles, but boxer briefs are hot.

The black ones in a silky-ish material are nice, too. Hotcha.

Boxer briefs are hot. Make him get a pair of black ones, that's even hotter. Not that I know...

I never would have guessed that Gary had such an attractive stomach and legs. I can see why you like them.

Dare I tell you that my husband whom you think is cute wears these, too?

Solomon Broad - Well, Gary never wore boxers, but he says these Boxer/briefs are considerably more comfy than briefs.
Kathy - Rawr. You know it.
Becs - He has black ones. I know. Hotcha!
Katie - Boxer/Briefs = Hot! Black = hot! Why don't more men know this?
Hot Mom - Actually, looking from bottom to top, the resemblance only fades when you get right above the blue line.
Caroline - Thin ice, woman.

Back when Ryan and I first got together, he wore tighty-whiteys. One day he needed new underwear for some reason and the new ones he bought were those exact same Jockeys, but they were in grey.

I LOVED them (I mean, anything's better than tighty-whiteys!) and praised his new underwear choice profusely. He immediately threw out all his old underwear and now only buys the boxer briefs.

However, they have a new style now, and all I know is that Ryan loves them even more and calls them "The Pouch" and swears by them. "The Pouch" part of the underwear "gives his boys a home"...which apparently is very important. All I care about is that they're cute and make his butt look good.

These are my favorite men's underwear, too. It's been a losing campaign in my household, though. He owns one pair, which he has only ever worn for the rare Big Date when I too am probably wearing some uncomfortable getup under there. I guess some men like their spurs to jingle jangle.

Hmmm, I'm just not a fan of the boxer brief! They look too much like briefs that have decided to be more chaste. Plus, if a man is wearing dress pants that are thinnish, you can see a line on their thigh when they walk or sit crossing their legs. It's creepy.

Faythe - Huh. I don't want Gary's boys to be homeless.
Tasterspoon - It's almost unanimous...
Amy - You rebel! One anti-b/b vote. On the other hand, you are holding firm against the visible panty line.