I was so busy "posting every day for a month" that I need a day to catch up and update you on old news:

Cysts
I find out tomorrow what the next step is for the PancreaCyst. Mom, however, woke up Wednesday with a cyst swinging off her elbow, much like this: 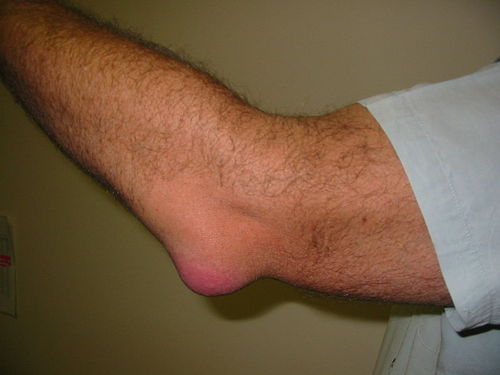 ...except Mom's arms are less hairy and more frail. And the first thing we both thought was, "That looks just like a testicle hanging off [my/Mom's] elbow." Our Google research has determined Mom either has Tennis Elbow or A Ganglion. Or the Dread Elbow Testicle.

The Linens
Are still at the bottom of the basement steps.

The Genius Brownie Pan
Well, it's a bad idea to bake a pan of brownies and then pull out the directions. With every brownie with two edges, you need to check the brownies ten minutes early. I expect a few more test batches before I have the new brownies perfected.

Spongeworthy
I stood in the aisle at the drugstore and wondered why there are so many variations on the condom. It's as bad as toilet paper. Given that Gary has been known to throw toilet paper out of the bathroom, I looked for the most expensive box. Too many were tied at the same price, so I went with the Today Sponge. I know I'll pop it up there and totally forget about it.

L'Estate
The in-laws just handed the abandoned waif of sixty-five years everything she asked for, so with that and the lawyer fees and the taxes it's down to a quarter of its former splendor. Still, as I pointed out to Gary, "Who complains about an inheritance? Quit griping about it." I'd be happy with even the tail of an emu.

Oh God. I was eating when I opened this.

I hope your mom's elbow and your pancreas are fine. And not testicular.

The brownies may have been overdone, but they were still brownies, and ain't nothin' wrong with that.

Yikes! That's scary. My dog had that once and still her arm wasn't that hairy!

Caroline - We find out about Mom's elbow Weds and my pancreas (hopefully) Friday.
Judith - yes, when we looked it up about half the elbows were dog elbows. Plus, did you notice it's a shaved testicle/elbow?

Ah, Spongeworthy...I completely empathized with Elaine in that episode. I was crushed when "they" took the Sponge off the market. I celebrated when "they" brought it back. (By the way, I would think the smell would get to you if you leave it in too long...but that's just an educated guess.)

pageycooks - As I understand it, the same company didn't bring it back. The original company had the recall because their factories were up to code. They said "screw it then," and a different company bought the sponge idea and made them under the same name.I'm considering popping one up there during a random moment and then seeing if I can tolerate it for the 26 hours it can stay there.