When I was young (I mean over twenty-one) Gary got me a Polaroid camera for my birthday. (Technically, it was one of the short-lived Kodak Cameras.) For some insane reason, he gave it to me at my family birthday party.

Dad asked, "But why did you get her a camera? She has a camera already."

Gary answered, "I thought this was a cool camera."

"It's an instant camera! The pictures come out already developed!"

"Yes, but why wouldn't you just take them to Walgreen's and get them developed there?"

Of course, children, the Polaroid is my generation's version of the digital camera. We didn't turn the Kodamatic back in even when they encouraged us to do so to get the settlement for the class-action lawsuit. Eventually it became impossible to buy film, but by then we were done playing with the camera. And perhaps by then the Internet was piping more exotic photos directly into the house.

A few days ago Gary said, "Hey, look what I found," and tossed the disintegrating box of instant photos on the bed. THE Box. The box labeled "MOM DO NOT LOOK EVEN IF WE ARE DEAD."

I looked, and I was struck by a number of things:

1. My body was emaciated, except for my "huge" thighs, which were perfect.

2. I am partially dressed in almost every photo.

I don't mean "I look awkward" or "I look uncomfortable" or "I'm wearing Bunny ears." I mean Stupid, as in Educable Mentally Retarded.

When we first married, Gary would amuse himself by having me do the "hamster" look.  I'd let my eyes glaze over and tilt my head a little. Somehow, I could momentarily empty my brain, just long enough for Gary to squeal "Hamster!" because it was the same blank look hamsters have. (Shut up. Really. That's why. Besides, Gerbils and Hamsters aren't the same.)

That is how I look in all these photos. A decent young lingerie-clad body propped up in sexual positions topped off by a hamster head. A blank, unlined, inexperienced face with empty eyes.  I tried to look sexy, but the best I could do was slack-jawed and vacuous. Maybe my left eye would droop a little bit.

"I just want to SMACK me," I huffed at Gary.

Yeah, there's one below the jump. I'm trying to look sexy. Could I look more expressionless? Woo. Hot Momma.

(Update: and, because it made fried rice come out of my nose, I include Zayrina's LOLcats version.) 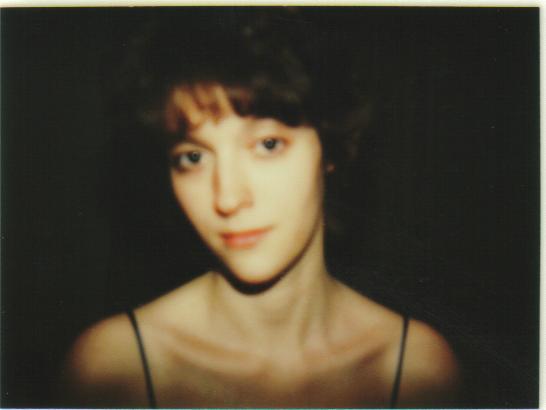 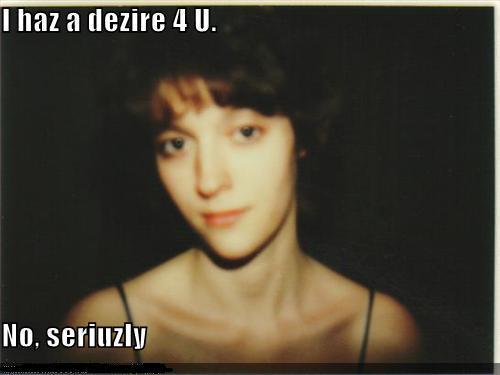 Posted at 09:39 PM in In Which We Mock Our Husband | Permalink

He got YOU the camera? So where are the interesting Polaroids of Gary?

Tyra Banks would say "You need to learn how to smile with your eyes," and then do this slightly squinty demonstration that really isn't much different than her normal expression.

Isn't it such a bitch, though? When we were young(er), we thought we were so horribly ugly when in fact we weren't. We were just perfect. And who knows, maybe we still are....Well, to our 60 y/o selves, maybe.

Just to show you how out of it I am, I didn't know what was in the box until almost right before the jump. I really need to get out more. And shame on you for taking dirty pictures!

Oh - yeah - what Silk said. Where are the pix of Gary?

I just want to give you some freaking food. You don't look stupid, I think you're just starving. A nice casserole with some protein and the life would reappear in your eyes.

~~Silk - Um, Gary saved HIS favorites, not mine. Besides, I am equipped with an imagination.
Kathy - I was lusting with my eyes. The best I could. It is so LAME. (Smacks younger self's head)
Becs - A STUPID Renaissance Princess. And, I know this is true, the current me will look good to the 60 year old me. I just need Gary to appreciate my current hotness. He isn't comparing me to 60 year olds.
Candy - Well, it was only soft-core porn.
SueBob - A STUPID dreamy young lady.
Becs - Truthfully, I can only remember one, and it was actually destroyed with scissors (so it would never appear on the internet).
Zayrina - Ha! HAHAHAHHAHAHAHA! I'm still laughing about that. LOLZ.
Katie - You should have seen my rib cage.
Becs - Yeah, those collar bones are long gone.

Duz u haz a flavr?