« Everybody do the Flagrante Delicto | Main | Huh. A Question Wikipedia Can't Answer? »

In Your Face Food

Soon, we will plunge our faces into the official Christmas food. I am particularly prepared for this, having followed the post-pancreas low-fat diet faithfully.

I heard recently that "ham" is typical Christmas food. I never had ham for Christmas. (Mom will correct me, I'm sure.) I know we had a Breakfast smörgåsbord that was delicious.

The in-laws don't have ham, because ham is too easy. Instead, they have a buffet of olives, rye bread dip, dollar rolls, lunch meat, and cakes brownies and cookies diced into the smallest portions you can imagine.

Of course, they don't have turkey or fish. No fish, because if you leave fish or potato salad out for over an hour it becomes poisonous, and no turkey because it makes Karen conscious that she's eating an animal. She will tolerate a carved turkey as long as the legs are chopped off and hidden under the sliced meat.

On the other hand, I like food to look like what it is.  I've spent a fair amount of time lately at West County Mall, where the J. Buck's serves calamari. Not the calamari that looks like octopus suckers, this is the stuff that looks like what it is: baby octopuses.  (Huh. The Typepad spell checker thinks "octopi" is an affectation.)  Evidently U.S. chefs remove the tentacles, but at J. Bucks they keep the tentacles and all. The ones I had a few years ago looked like this: 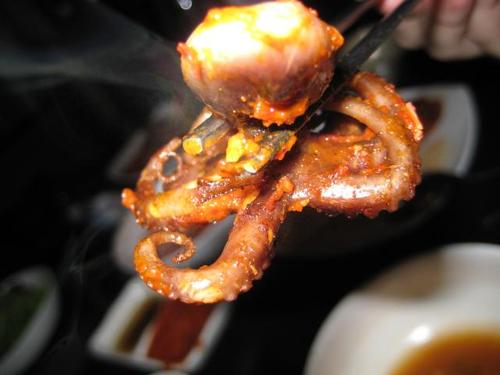 Hah! Baby Squid! I own you! Get your tiny self into my belly.

In fact, if you like food that looks like what it is, you can't do better than seafood. Lobster, shrimp  (to some degree), those cute baby squid. Nom nom nom! Welcome to the top of the food chain!

Otherwise, it's hard to find foods that look like the original animal (See: Pig snouts, the search for). I have little opportunity to eat quail, but I understand they are sometimes served with the little head and beak intact. I would eat that. I would. I would crunch their bones.

I know this is horrifying the vegetarians out there, and I'm sorry, but at least I'm honest.  If I can't overcome my base desire to eat other living creatures, at least I look them in the eye when I do it.

Posted at 12:44 AM in Miscellaneous Mockery | Permalink

Growing up, we always had ham at Christmas. I thought it was more that it was easier to cook than a tradition.

(I am a vegetarian now, by the way, and that little octopus is making kind of nauseated. Sorry.)

Ham is NOT a Christmas food. Don't get me started.

I've been awake like 2 minutes and it took me 4 tries to spell not in all caps. I think it's going to be a long day.

I like Christmas ham. Actually many years we had ham for Thanksgiving as well. Ham for New Years, Ham for Easter. Yum, ham.

I do not want my food to look like the animal that it is. I do not want food to resemble body secretions and calamarie look too much like something I have suctioned out of a dying COPD patient, that deep lung mucus. Blech!

I have no problems enjoying my top-of-the-food-chain status. Even though I believe we are fully intended to eat meat, I prefer to believe that hamburger comes from the grocery store and nowhere before that.

It's also horrifying to those of us who eat meat. Bbbllleeeccchhh!!!

I'd like to think that I could eat a whole squidlet, but I don't think I actually could. Kind of like the fireman's pole at the playground...I'm fairly sure I'd chicken out at the point where you're actually supposed to jump onto the pole.

Mmm, calamari. Niece #1 tried it for the first time in November and she LOVED it. After chomping one down, she promptly asked, "Can I have another octopus?" HEE.

Kathy - I appreciate the vegetarian way. Don't say "Sorry!" I'd probably end up dead because I'd go all vegan and not take any vitamins.
Katie - I have so far fought off the urge to go back to your comment and edit it so it's all in Caps. DON'T KNOW HOW MUCH LONGER I CAN HOLD ON.
Zayrina - Shrimp wouldn't look so much like grub worms if they kept on the legs and antennae. Crabs do look like ticks, but ticks you could catch and beat up on before they bit you.
Caroline - I will Moo next time you eat a cow.
Melissa - Not blech! Well, that picture doesn't do the calamari justice. They are more appetizing deep fried.
Erin - Gary always says "Pop it in your mouth!" about all appetizers. I think he saw Barefoot in the Park too many times. He would scream at you to pop it in your mouth until you did it to shut him up.
Catherine - Ha! A girl after my own heart.

I had a quail for Christmas, and it was, like, two bites. We were in a fancy restaurant, but my family gave me permission to eat it with my hands, because, seriously. A knife and fork? Give me a break, it was four inches of tiny bones. Maybe I WAS supposed to crunch his bones.

TasterSpoon - according to this man, you were right. See the end of paragraph 2:
http://books.google.com/books?id=996Qpvjp1s8C&pg=PA77&lpg=PA77&dq=how+%22to+eat+quail%22&source=web&ots=it6cM5Xh9U&sig=LRUngxba1ZmSK0TRhE28ZV2f4UM

Ham-definitely a Christmas food for us...but I don't dig on swine...totally a mental thing that goes back to 9th grade biology:) Good times.

What is a dollar roll?

Autumn - Click here - its from Dierberg's, one of the local groceries:
http://www.dierbergs.com/dierbergs.com/services/parties+to+go/party+platters+and+more/the+complete+sandwich/dollar+rolls.htm