I was stone dead asleep early this evening when Gary woke me up, screaming something about football history being made. Evidently, there was an important game on. I didn't care, I don't follow football, but I like watching Gary watch football. Plus, the halftime show with Marshall Faulk brought back fond memories for me.

To tell this story, I have to "out" an anonymous friend. Friend #3, Marcia, has a last name that rhymes with "Faulk." Her full name is Marcia Cock.

She once mentioned how it was distracting to listen to sports on the radio, since every "Marshall Faulk" sounded like "Marcia Cock."

Well, one day I was with the work crowd at the Starbucks across the way. We got coffees, went outside, and the others suddenly huddled squealing, "Oh, my God, I swear to you, that was Marshall Faulk in line behind us!" I knew Marshall Faulk was a football player, because Gary would watch games and scream, "Faulk! Faaaaulk!" Sometimes even when Marshall wasn't playing.

Marcia said on the way back to work how she had wanted to introduce herself one day to him with "Hello, Marshall Faulk, I'm Marcia Cock."

She stopped dead in the crosswalk. "Will you go with me?"

I turned and we headed back to the Starbucks, because I doubted it was the famous running back. He just hadn't seemed large enough.

He was the only patron still in there. Marcia hung back staring at him for a second, but I tromped up to the counter where he was getting his four Vente coffees.

"Is there a problem?" the barista asked, surprised to see me so soon after we left.

"Nope, I just need to know this man's name." I smiled at the nice man getting his coffee.

"Chris," he said, pulling one of the cups out of a cardboard sleeve marked "Chris."

"Heh. That is pretty close," Chris chuckled, backing out the door.

If I recall correctly, Marcia's response was, "Why? We just met Marshall Faulk!"

"Chris. His name was Chris. It was even on the coffee."

"Oh my ass. That was Marshall Faulk. No one else has that Joker smile."

I would have spent an enjoyable day ridiculing Marcia (Cock), but when we got back to the office I had to admit that this: 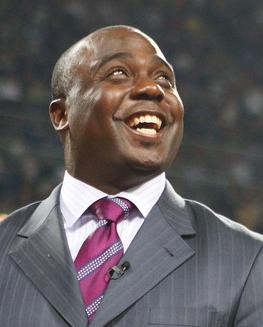 ...was the smile I saw in the Starbucks. It's a pretty distinctive smile.

My favorite thing about this story is that we were able to meet Marshall Faulk, but he still got to keep a little distance. He got to be "Chris," and no one argued with him. And independent sources did place Marshall at our Starbucks that day wearing the clothes we saw "Chris" wearing.

Of course, if it's an argument you're looking for, I can bet you Marcia Cock has a totally different memory of this story.

Posted at 01:15 AM in Miscellaneous Mockery | Permalink

That IS a joker smile.

Yay, I got to be the sporty one when I informed my boyfriend about the perfect record issue when I noticed the game on the schedule. He was duly impressed, until I said something about making it to the World Series.

I totally stole that joke from the TV I DID watch today, which was a movie starring Hillary Duff and Heather Locklear. Yeah, that's all I got out of that movie. Its two star rating was a kindness.

If someone woke me from a stone dead sleep over a damned football game he would be looking for his nuts in the next town.

I once stood in the check in line at TWA (so a few years ago...) behind Kevin Carter. He was a Rams player, for those who aren't familiar. That many's neck was the size of my head. I wouldn't want to run into him in a dark alley.

BTW, I have a pretty similar memory, except when we returned to the barrista station and you said, "I just want to find out what this man's name is," and he flitted a wary glance at each of us before saying "Chris".

I then proceeded to babble at him (knowing damned well that was Marshall Faulk standing there with a venti cappuccino in his hand), "Aww, shoot. I always wanted to meet Marshall Faulk, because you see, I'm Marcia "Cock" (Thanks for that, BTW.) and I wanted to say how confusing it was to listen to the football game on the radio and hear what I thought was an announcement of *me* as the ball carrier. You know, Marshall Faulk? Marcia (Seriously, Ellen) 'Cock'?"

To which, "Chris" smiled that Superbowl MVP Joker grin of his and said, "Pretty close."

Heh. He knew he was totally busted.

Later, the barrista said that he uses the alias "Bill" at the Clayton Starbuck's.

TasterSpoon - the TV writer's strike is hurting everyone. Solidarity!
Friend #3 - *Innocent blink*
Zayrina - I think he really viewed it as history. Like Bhutto's assassination.
Caroline - I got an ultrasound once right after Amp Lee (?) - Some football guy. He looked quite nice except for yes, the giant neck.
Friend #3 - Well, I know your name was originally Schlongstein, but they Americanized it at Ellis Island.