Christy asks: "How Did You Meet?"

This desire lasted until Mr B_________' s History of Education class. Mr. B__________'s class was dull. I didn't find this out until two weeks into the semester. I never attended the first two weeks of any college course. Case in point: Figure Drawing. No one gets naked until Week 3. QED.

"Out of my league" was Gary. Check him out! 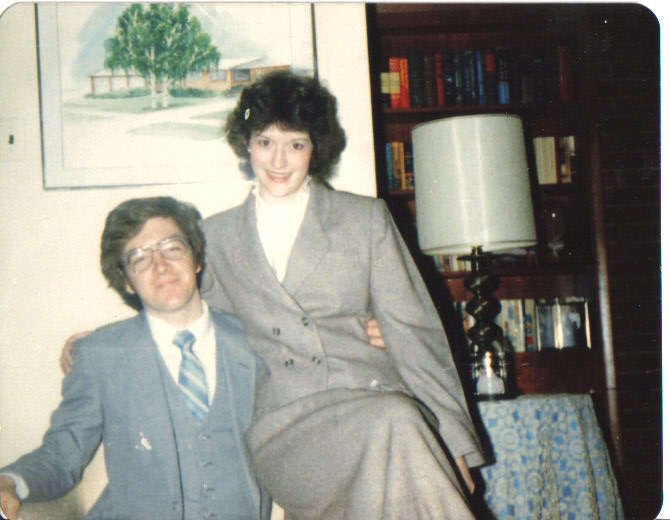 A body wave and a three piece suit! Smoooooth!

I worked up the nerve to talk to him on week 5. "Running away?" I asked cutely when I saw him heading toward the vending machine.

We talked the next week after class for an hour. The next week when the same thing happened, I brought out my high school English teacher's smooth line -- the one she used to ask her out her husband:

"Well, this is silly, just standing around talking. Let's continue this over dinner."
"Okay!" he said, "How about Casa Gallardo?"
"Well ... I don't know, I don't think I brought enough money to treat you to Casa."
"That's okay. You can pay on our next date."

Oh, yeah, baby. Of course he had enough cash to take me to Casa because he'd planned to ask me out but did not, as he had insufficient sack. He was lacking in sack, as it were.

(P.S. I AM LOVING this new "sack" term! Many thanks to  ExportedMolson.)

Posted at 10:16 PM in In Which We Mock Ourselves | Permalink

It would take an awful lot of sacking up to ask out that Kate Winslet-looking babe in the photo.

VU - Well, thanks. Kate Winslet? Yeah, If they shrunk Kate's head. Well, to be fair, I kept that photo all these years because it's so uncharacteristically flattering.

Gary looks, I don't know, smugly satisfied in that picture, as if his race horse just won the KY Derby.

You look like you should be wearing hoopskirts and fanning your face coquettishly. (That's a compliment. Sometimes it is hard to recognize my compliments.)

I'm a little behind on your blogs, but I love this new "sack" term as well. I think I might need to steal it!

Christy - He tends to always look smugly satisfied unless I'm taking the photo. Then he looks annoyed or puts underwear on his head.
Sue - Let's see - that was to see The King and I. Yeah, I think he'd bagged me before that one.
Autumn - Heh. It's sweeping the nation.

You should know that I am *still* laughing days after you published this post because you said "body wave," a term I have not heard in, oh, I don't know, AGES. AHAHAHA.

Also? I hope both of you pose just like that for your Christmas 2007 photo. That is, if you do such things. Body wave (AHAHAHA) and Working Girl-inspired double-breasted jacket not required.

How old is that picture?

Gary reminds me of Kevin Spacey...with a body wave.

Catherine - I was worried no one would have heard the term ever. Look, it isn't even in Wikipedia:http://en.wikipedia.org/wiki/Body_wave
Marriage-101 - Dates back to 1982, I think. And he does look like KS, now that you mention it.