Often, I will be eating chips with my friend Caroline (she's #4) when she will silently hand me a chip. It puzzles me a moment, until I inspect the chip and see it is curly. Caroline knows that I am the owner of all curly chips.

I think this might date from high school, when my friend Dave K______ explained to me the difference between circumcised and uncircumcised penii. He claimed the uncircumcised looked just like the circumcised, except it had the foreskin, which looked kind of like a folded potato chip curled back on itself. This, as I recall, just confused me more, since I had no clue what a circumcised penis looked like, much less one with a curly potato chip of flesh hanging off the end somehow. If it weren't for that guy in figure drawing class I would never have known.

Anyway, I found these chips at the grocery last weekend: 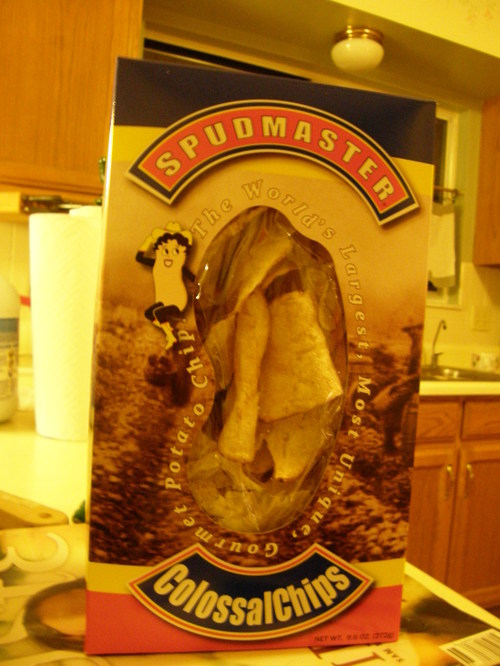 Yes, that is a window so you can see which box has the most curlies. Since Gary knows better than to eat my curlies I ended up getting an equitable chip distribution with this box.

This reminds me. Gary, for some reason, has taken as strong dislike to "suckmahballz." I think we have a new phrase right there. Eatmahcurleez, Gary.

Posted at 10:13 PM in In Which We Mock Ourselves | Permalink

I almost bought those chips, but the price steered me back to the Lays.

I like curly chips better, too. :) Also: the link for the Alanis song should be the link for my name, if that makes sense.

That's cool that Autumn asked permission, because I decided that I liked "suckmahballz" so much yesterday that I used it all night long without permission. In essence, I basically said "permission can suckmahballz".

You can have all my curlies. I'm a bit of a purist when it comes to my chips. Although I'm not above eating the crumbs at the bottom of the bag. So maybe I'm not.

My own chip ownership relates to bubbles, ideally kettle chips with bubbles - but I also dig folded ones, and these Spudmasters look like the most awesome special-purpose savory snacks since Pop Knots, which were a can full of nothing but popcorn old maids, with optional seasonings. Brilliant.

Kathy - GARY even commented on the price. I believe my response was to point at the big curly in the window and whimper.
Autumn - Of course, suckmahballz is from South Park. I think you should say "eatmahcurleez" often. My goal is to get it in the Urban Dictionary.
Erin - Yes, if I click "Erin" it goes to the Alainis song download. Cool! I trust you so much I downloaded it at work.
Christy - Ha! SuckMahBallz, Christy!
Marriage-101 - Okay, but these chips also have Pure Chips the Size of Your Head. It's scary. Not that I'm pimping these chips. they seem like they're flavored with Mrs. Dash instead of salt.
Tracy27 - Oh, if I find one with a curl and a bubble I know Ive scored.

Oh, by the way, he's been reading your blog. What amazes me is that he actually told me about it.

I've been conditioned. Now everytime I eat potato chips I reach out to hand the folded ones to.... no one if you're not around.

Caroline - I'm sure they wouldnt go stale if you saved them for me.