Ask me what I did tonight. Assssssssssk me. Ask me, she breathed, as her eyes narrowed and her hands shook.

I watched Meet The Press for two hours.

"Huh," you say, "I thought Meet The Press was only an hour show."

Yeah, but it takes two hours when Gary pauses the TiVo every five seconds to scream "McMaggot!" at John McCain. Gary, who long ago voted for George Bush the Elder. It would appear I have created a monster. Converts are the most fanatical followers. Of course, I do wonder what provoked John McCain to sell his soul, but I don't scream at his image on the tv.

Actually, I was hypnotized by his image on the set of Meet the Press: 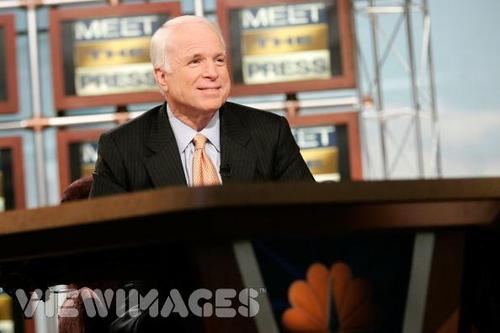 I was imagining this conversation went on in the McCain house the morning of the taping:

"John! What are you doing in that green tie?"

"What's wrong with this tie, honey?"

"It doesn't match the Meet the Press set. You have to wear your gold tie or your rust tie. And your light blue shirt. And your gray suit, because they have these gray struts holding everything together in the background."

Can you believe Theresa Heinz Kerry let her husband leave the house like this? 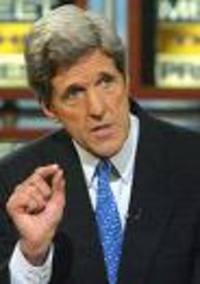 He didn't coordinate with the set at all. I mean, he's still totally right, but it's so obvious that it didn't capture my interest.

Instead, I started to think seditious thoughts. For example, Let's say Iraq becomes a democracy and can stand on its own. Isn't the right to free assembly part of a democracy? So let's say al-Qaeda in Iraq decides to form its own political party. Or the Taliban. Can't they legitimately run for office?

Or, even better, let's say the Michigan Militia decides to attack Canada, just like al-Qaeda attacked America. Could Canada then drop bombs on us for harboring terrorists, like we bombed Afghanistan? Hmm. I mean, I'm sure there's some fundamental difference I'm forgetting, you know, like "We're good, they're evil," but I couldn't concentrate because Gary was screaming for two hours.

Posted at 09:40 PM in In Which We Mock Our Husband | Permalink

But do you think we'd just let the Michigan militia attack Canada? I'd like to think we'd put the smackdown on them, which is what Afghanistan and Iraq won't do with al-Qaeda. Hmmmm....

That is a very peach tie.

I agree with McCain on immigration and torture, and I generally like the guy, but he's not the same man he was in 2000.

Re: the Michigan Militia being terrorists (and they are). It should be note that the KKK, the American Nazi Party and the Aryan Brotherhood, among others, are terrorist organizations as well. I say we bomb ourselves. Maybe then people will pay attention.

Sue - Shh. Don't tell Canada.
Caroline - Do you think they'd ask permission first?
Friend #3 - Now, that is extreme. And, I distinctly recall looking the 1945 Encyclopedia Brittanica Yearbook and seeing the Nazi Party was outlawed in 1945 America. It took me aback.