You know, a wedding holds limitless faux pas possibilities. A funeral? Limitless to the infinite power. Gary and I have been reviewing the past week and shaking our heads at the faux pas, blunders, and near-misses we had.

(Typing this, I realize that this morning is the first time in several days that I've let go of Gary's hand. And it occurs to me that men and women don't hold hands in public in Islamic culture. Well then. Limitless to the infinite power plus one.)

Near Miss #1
At the wedding, we met a lot of the bride's relatives from Canada. Some had lived in Toronto.

Gary perked up, "Toronto? I hear there's a really good music scene in Toronto."
I think, If you open your mouth and say, Barenaked Ladies are from Toronto, I will kill you where you stand.
"Our favorite band is from Toronto!" he bubbled on.
Oh God, please call them BNL. Please. Please.
"We went on a cruise with them. It was great!"
Oh, God, now he's leading up to the naked photo.
"And there's this really cool Wild Animal Park there too!"
Thank you thank you thank you.

Blunder #2
It was particularly horrifying to realize that Gary, as the oldest male relative of the groom, is the patriarch of the family. We were already taken aback  that Aunts and Uncles are considered immediate family and parade in to a volley of rose petals, nuts, and candies. Thankfully the mic was broken at the Groom's reception, so Gary didn't have to make any speeches other than to say "Help yourself at the buffet." (Enjoy the Goat!)

Faux Pas #3
Before the wake, my nephew was discussing the Qur'an with me, and I picked up their copy. It was in Arabic, but each page had an English translation. I wanted to see where it began, so I turned to page 1. "Hey, this starts on page 2231," I said. Because I wanted them to know that pages 1-2230 had fallen out.  Or how about because Arabic is read from right to left, moron.

Heinous Mistake #4
Gary repeatedly broke with Islamic tradition during the wake by repeatedly poking his head over the divider that separates the men and women to speak with me. When the men protested, he said "Oh, it's okay, she's my wife."  That's what he says when he gropes me in public. No. Not really. He just gropes me. Okay. I'll stop making jokes now.

Thankfully, You Can't Offend Children
I avoided most stupid mistakes by spending the wake entertaining a sweet little girl. I recognized her as the girl who had narrowed her eyes and thrown the nuts and candies at me with great venom during the wedding march. We made up. By the end of the afternoon, I was "Corporal Ellen Didi" (sister), and my job was to take the reports as she spied on the men. She brought some Kleenex because, as she said very seriously, "We might cry." She asked her brother upstairs if she could bring a friend upstairs and he laughed when he saw a middle-aged woman. She took a ball point pen and drew Mehndi on my palm and broke my heart. 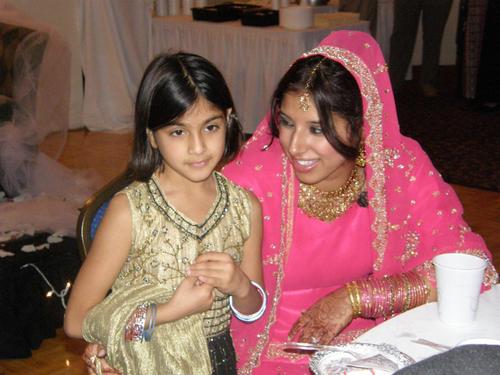 Posted at 12:07 PM in In Which We Mock Ourselves | Permalink

And now you've gone and broken *my* heart. Sniffle. Okay, you made me laugh a lot with this post, too, but yeah, much sniffling.

Life goes on, indeed. Enjoy the goat while you're at it.

There is life, and even mirth, in death. That's what makes it bearable. I'm glad you had a little angel with you to keep things in perspective.

That really does suck...add me to the list of those whose thoughts are with your family.

Again, speechless. My thoughts are with you.

I loved this post. The picture is awesome too. :)

Still thinking of you and your extended family...and that picture really is priceless.

>>And it occurs to me that men and women don't hold hands in public in Islamic culture.<<

Fortunately, you're not Islamic. No faux pas. You didn't force anyone else to touch each others' sweaty, nervous palms.

Catherine – Her sweetness was a little light. That's why I let her beat me at a thumb war.
Friend #3 – Well, no mirth, but you could tell she didn't know what was going on.
David Brown – Thank you, David
Sue – Yes. I think I was in shock until Friday morning.
Ajooja - Thank you.
Autumn - It's odd - the little girl was very somber at the wedding, and almost cheery at the funeral.
Caroline - Well, I was very careful not to shake any men's hands.