« Stupid clients leaking over into other areas. | Main | A Big Thank You To My Neighbors »

In Which I Cower in Fear

I've been trying to be a little more fearless now that I am in my dotage. I don't want to end up like Gary's sister Karen, who just today sent this email:

"Can you both make it earlier at mom and dad's tomorrow on the 4th.  Around 12noon.  We are trying to miss  the late afternoon Thundershowers."

She's always been that way about thundershowers (or, rather, Thundershowers). Once, Gary's parents were coming to the airport to pick us up from our honeymoon. Karen sobbed and demanded they wait until the storm was over. Luckily, it was ONLY ABOUT TWO HOURS.

I don't want to be that way. However, it appears my conscious effort to be fearless might have failed me. I bought Counting Crows tickets at the GCS Ballpark in Sauget, Illinois, right across the river.

Okay, many of you might know that what truly is right across the river is East St. Louis, Illinois. Murder Capital '07! Whoo! However, the concert is not in the heart of East Saint Louis. It is in Sauget. Observe the map: 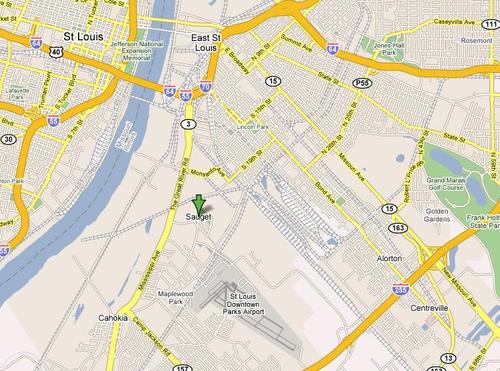 The green arrow is Sauget, and the ballpark is even further South of East Saint Louis, at the southern tip of the airport you see at the bottom. 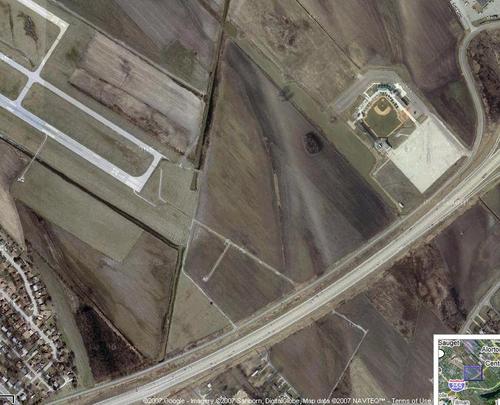 I took comfort in those empty fields.

"SAUGET? ARE YOU OUT OF YOUR MIND?"
"No, Mom, I think it will be -"
"Stop" she barked (and if she could raise her hand she would have added the "Talk To The Hand" gesture). "I want to hear nothing else about this concert. Do not mention these Crows to me again."

So that was THAT. That made me a little more determined to go. I even thought, hmm, maybe Marcia would be more fun to go with than Gary.

"SAUGET? ARE YOU OUT OF YOUR MIND?" Marcia roared. Then, more calmly, "I deeply regret to inform you I will be unable to accept your kind invitation."
"Well, fine." I turned to Libby, my most fearless friend. "You would go to - "
"Not a chance. Really, are you out of your mind?"
"No, it's Sauget, not East Saint Louis. I've taught classes at the chemical plant in Sauget."
"Well, if Monsanto was holding a concert at the chemical plant, that would be different. But it's at the ballpark."
"But this ballpark looks really safe. I looked at the satellite photo. There are just empty fields around the ballpark."
"So, they didn't happen to be making heroin deals in the fields at the moment the satellite passed overhead."

I looked closely; no heroin deals: 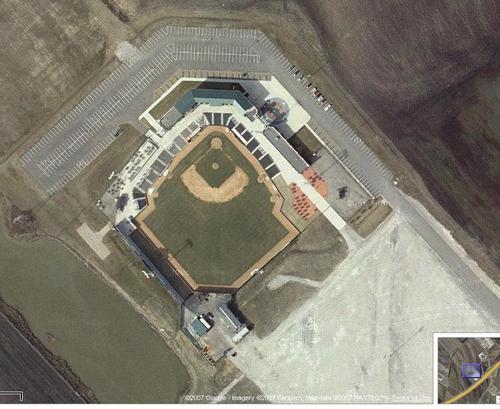 But I asked one more person, and even my boss said she wouldn't feel comfortable in Sauget. I know all our husbands had their bachelor parties there, but perhaps they wanted to die.

So. Tickets are on Craigslist. I don't suppose you'd want them?

By the way, I did scan the East Saint Louis satellite map looking for heroin deals, and this sketchy assemblage of houses, cars, trailers, and burned-out foundations was all I found: 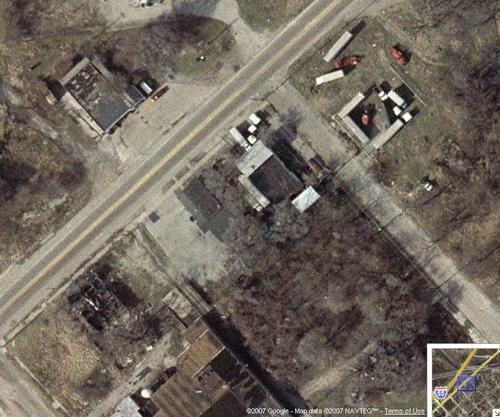 Posted at 11:02 PM in In Which We Mock Ourselves | Permalink

I was one of The Company's reps to Monsanto in the early to mid '70s. I occasionally found myself stopped at traffic lights in East St. Louis. I drove a convertable sports car then, and even with the doors locked, that cloth top left me feeling very vulnerable. At night,I RAN the red lights!

Never heard of Sauget, but if I'd have to go through ESL to get there....

Um, maybe they're less worried about the location than the crowd it might draw?

When I was in my early 20's I had a friend who was afraid to walk across a parking lot by herself, even in friendly neighborhoods. Today it seems there are precious few such places. Still, how awful to be paralyzed by fear like that.

Having said that, I too will pas on the tickets. But thanks for offering!

Is it really that bad if a minor league baseball team plays there? I bet as long as you don't wear anything provocative (heh), you'll be fine.

I'll go with you.
I love Counting Crows and I'm impudent.

Sauget (pronounced So-jhay) is the bachelor/sad-post-adolescent-male party capital of the St. Louis metropolitan area. And the Google Earth photos depict the infamous fields of southern Illinois (regardless of municipal boundaries) where the local television news stations report "a body was found in a field near [insert your choice of Brooklyn, Washington Park, Sauget or East St. Louis here]."

I might suggest we just go see the Counting Crows in downtown Tikrit. Pack your Hijaab.

Unbelievable! You forgot about me didn't you! I enjoy the Counting Crows and Sauget does not bother me.

Florida-style thunderstorms scare the crap out of me and I lived there for 10 years. Orlando, lightning capital of the world. So that I understand.

Re: Sauget and CC, if they're always reporting dead bodies there, I think I would probably stay home that night. Just sayin.

You powderpuff. I used to date a guy who lived in a ghetto in Gary. I was the only white person for blocks in any direction. I, being from gunculterusa, carried a loaded .357 in plain view at (almost) all times. It was a huge thing and quite visible, and I promise no one messed with me.

*rolls eyes at self*

BTW the new ball park they built up there was right in the ghetto part. It is to lure whites back to the area I believe. My then bofriend's Mexican mama's first question to us, when we came to her house after a game, was, "were there white people there?"

If you build it they will come!

Oh, I did not carry the gun to the park. Bad MOJO and all that. No one messed with me. Go, you'll be safe.

Native to Orlando, not really bothered by the thunderstorms. I just don't stand outside.

Also in Orlando, the biggest auditorium and exposition center in town is snugged right up against the absolute worst neighborhood. Often you have to park your car in one of the lots where the sketchiest houses are. That's where the nice policemen stand at their most obvious. Been there a number of times late at night, never seen, heard, or been subject to anything beyond someone trying to persuade me to pay them $5 to park in their yard.

And it's not like you'd be there by yourself. There's bound to be at least a few hundred other folks, if not a few thousand. And nice policemen. It doesn't do to have violent crime in areas where they want to attract folks in order to make money. The moneymaking powers that be tend to frown upon it.

I've got plenty of things I'm scared about, but I try not to inflict my irrationality on others. If Karen were my sister, she'd be far, far tougher (because I'm evil.)

I'd go to the ball park, but not for the concert. It just doesn't interest me.

Whenever they find bodies in Sauget, they usually report that they were dumped there. I don't believe a lot of people are killed there. So as long as you're alive when you enter, there's a very high probability you'll leave there alive as well.

~Silk - Ha! Okay, I think you are the only person commenting who has actually set foot in that part of town.
Connie - Hm. I think Karen is okay with parking lots. Perhaps not, since every year one of her Christmas gifts to me was a fresh mace keychain.
David - Oh, you with your "heh!"
Robin - You are impudent, you shameless thing.Actually, Gary is all hot to go now that he knows I've lost my taste for it.
Friend #3 - Gary says his friends who visit the strip clubs always rent a car to go to Sauget, in case the car gets stolen.
Catherine the Red - I didn't forget about you! When was the last time you were in Sauget, though?
Becs - Yeah...I'm still inclined to stay home. I did drive in a thunderstorm today, though. Amusingly, the late afternoon thundershowers Karen was avoiding struck at noon, the newly scheduled time for the fourth celebration.
Zayrina - Oh, no one messed with you because you exude sass. I exude "Stout middle-aged Nice Lady." Even when I make the oral sex rock gesture.
Sherri - Yeah, that's thing - we had to stay late at the in-laws because it was still raining and it would have upset Karen if anyone else had driven in the storm.
Caroline - Why, I bet the bodies are killed in St. Charles at that bar Marcia hates and then dumped in Sauget.

What I know about Sauget:

1) That's where my cousin used to "disappear" when she was doing her week-long drug runs.

2) That's where the car she stole to do a week-long drug run was stolen from her.

3) My other cousin, drug-cousin's brother, is afraid to go there and pick her up when she's been on a week-long drug run and had her stolen car stolen from her.

The area around the ballpark at Sauget seems pretty tame to me. I wouldn't worry about it at all.

Hot Mom - well, she was there for a week and the worst thing that happened to her was her car was stolen.
ajooja - Boy, it sure looks tame. And you can get there from 255 and approach it from the South. AND I googled "Shooting + GCS Ballpark" and didn't find anything.

Freind #3 - First, go to bed. Second, All I found was http://karenmcl.blogspot.com/2007/03/any-cardiology-or-cardiac-surgery.html
...which tells me they put burgers on Krispy Kreme donuts instead of buns there!

I am in awe about the horror surrounding East St.Louis...I have a friend from St. Louis and the stories he told too...

Crunchy - Man...the infamy made it all the way to Canada!