So, now you are under the Arch. Start walking. If you walk west for five miles you are technically no longer in Saint Louis City, because for some odd reason there's a law that Saint Louis City will never get bigger than five miles wide.

Walk west through Saint Louis County for another ten miles and you will see another river, the Missouri River. Cross that river, walk another half mile west and you will be at my house. (Hi. Rest a bit.)

Keep walking for another ten miles and you will leave the suburbs and find yourself in the small town of O'F_____ Missouri. I used to think of it as a suburb, but now that I have attended the 150th anniversary celebration of the birth of O'F______, I know it is a small town. A small Music Man Seventy-Six Trombones We Got Trouble Right Here, Right Here in O'F______ kind of town.

Mr. Wonderful and the other denizens staged a fine theatrical production celebrating O'F_____s 150 years. There was some fine amateur acting during the dramatization of the founding of their fine town including some scary non-apologies on the topics of  Native Americans and slavery ("Who else would have cleared the land?" You, you lazy ass. You and your buddy Dan'l Boone). There was a truly lovely hammer dulcimer solo.

And then, my favorite part: 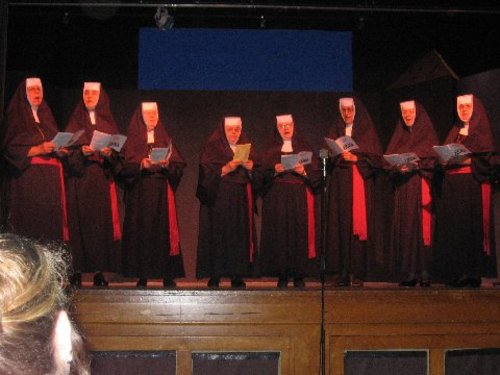 NUNS SINGING IN GERMAN! They started with "The Happy Wanderer!" Val-de-ri! Val-der-ra! I don't know if this song was originally in German, but they sang it that way. And you know what? It was great. And you know what else? It had nothing to do with O'F________ and its history. But nuns, they gotta sing.

This is why I can't believe anyone took seriously my April Fool's post about becoming a nun.

Besides, I look awful in too much black.

That's absolutely awesome. It reminds me of the Amish people who sing hymns in the 42nd Street subway station.

Speaking of the German, though: back when I was a little scrub trying to get into the stage union, I had to do all sorts of odd theater jobs while doing in summer stock. One of my jobs was "mop bitch" -- I had to mop the stage 45 minutes before the show. I made up a song called "Das Moppen Ees Das Leiben". It's not literally German, but the jist was: "The mopping is the LIFE!" or "To mop is to LIVE!" -- whatever I felt like it should mean on any one of those particularly hot-as-balls-and-I'm-performing-in-BARN kind of days! it was highly amusing to the musical director, who eventually started giving me little ooom-pa-pa chords underneath my song. Yes, I was working in Central Pennsylvania, so the German was quite fitting!

I live so near O'F____. How did I not know of this theatrical masterpiece? The non-apology piece sounds intriguing.