This week the sundials went from this: 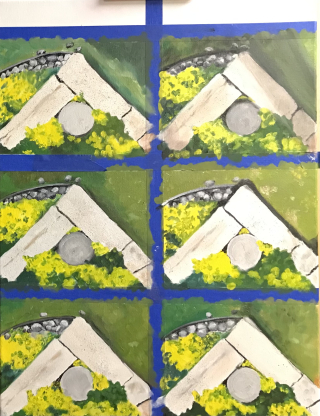 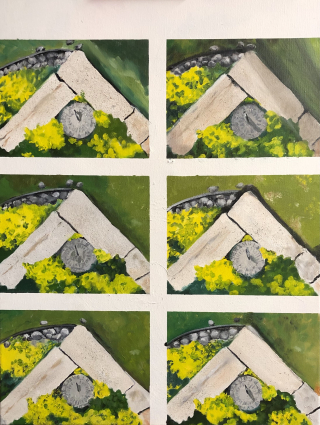 …from the original of this:

Not as satisfying as the birdbath. And clearly I need to go a bit darker. Will I? Probably.

Posted at 08:58 AM in Miscellaneous Mockery | Permalink | Comments (0)

I was watching Lindsey Buckingham on Colbert last week and I thought, “Is he playing power chords?” I was all prepared to feel just terrible about myself watching him play all the notes at top speed, dancing just the tips of his fully perpendicular fingers along the all the frets. But no. Power chords.

He ventured past the power chords pretty quickly after the first verse, but still, it made me wonder if he just had that guitar tuned so that all he had to do was just clamp a finger across the strings and move it around. I mean, that is rock and roll, but still.

That little manic episode dried up pretty fast and I decided instead that alternatively I could just learn how to play in something other than open position, that would probably help.

I have edited my email signature at work to include my preferred pronouns: she/her. I guess those will do. There’s no pronoun for menopaused women. I should identify as Post-she. Ante-her. Semi-him?

It seems odd to have done that, given that I don’t remember encountering any person at work who identifies as “they”, but perhaps they will feel more comfortable seeing my she/her.

I did recently rephrase a noun-verb disagreement with “he or she” and was chastised and educated on the non-pluralism of “they.” Fine with me. He or she was tiresome.

All this made me think of Eddie Izzard, and I re-watched Eddie Izzard: Dress to Kill, Cake or Death, Executive Transvestite, Ciao, just genius.

I wondered what he’s been doing lately and it seems “he’s” been changing his pronouns to she/her, she’s even calling back to Dress to Kill, saying she feels more “girl mode” now.

That’s why I feel odd adding my pronouns to my email signature, I’m not gender-fluid, I’m gender-stagnant.

Posted at 08:48 AM in Miscellaneous Mockery | Permalink | Comments (3)

I popped into a Zoom Meeting late, just as someone said, “Oh, so Ellen’s not being snarky with this spreadsheet entry,” surprised that in this one instance I was sincere.

It made me think I need to dial back my snark, and then I thought, “No, they should be able identify when I am sincere or snarky, I have a ‘tell’.”

My tell is the word ‘perhaps’.

”Maybe they need us to work late.” - sincere

“Perhaps they need us to work late.” - snark

Perhaps I’m being too snarky at work. More likely, maybe not.

I have this theory that  every person my age has heard every single Beatles song. Perhaps some we’ve heard just once, like You Know My Name Look Up My Number. But we’ve heard every one, somewhere.

This is why I was surprised to hear of an entire Beatles album I’d never heard of before. 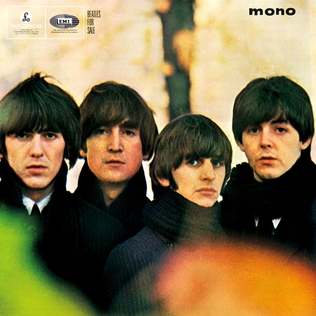 Then I read that one was released mainly  in the United Kingdom. In the US most of the songs were on Beatles ‘65. 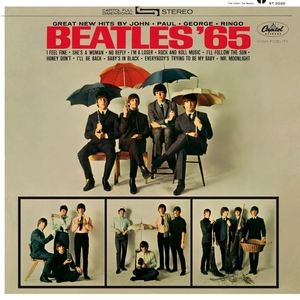 Yep, nope, never heard of that album either.

My next question: how crappy is this album? And, have I heard every song?

Answers: not crappy but creepy, and yes, on the US record there were some covers I’d never heard, but on Beatles For Sale there were three Lennon/MCartney songs I’d never heard: Every Little Thing, I Don't Want to Spoil the Party, and What You're Doing.

Rewriting the Novel: Beating it Into Submission

Well, I was making a summary of what I have accomplished so far, and I discovered two things:

It took me half a day to hammer the twist out and then back in again. Everything fits logically now, but it probably requires some explanation that will slow things down.

Painting and playing the guitar are much easier than this.

I was utterly unprepared for the January 6 protest/uprising/insurrection. (I encourage you to pick your noun. I would say the idiots outside on the lawn were protesting. the idiots on the steps beating police officers were criminals, and as for the idiots inside, saying they were insurrectionists gives them too much credibility. Idiots inside admiring the sculpture hall and staying between the velvet ropes were idiots swept up in the mob. Alternatively, the idiots inside who were defecating and chanting, they need to have Mike Pence come to their homes and pry up their baseboards and poop in their living rooms.)

Supposedly a new batch of idiots will be back tomorrow, September 18. The capitol police have put the fencing around the Capitol again, and lately around the Supreme Court. Why not the White House?  Supposedly 78% of Republicans think Biden was not legitimately elected. That number isn’t so high when you realize fewer and fewer label themselves Republican.

Enough with this nonsense. We have hurricanes, floods, a plague, swarms of flies, cicadas, armyworms, wars and rumors of wars. Do we really need an armed revolution this year?

Posted at 08:53 AM in Miscellaneous Mockery | Permalink | Comments (2)

This week the sundials went from this: 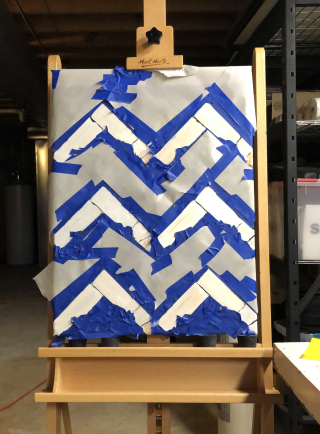 … and then I added all the other details except for the sundials themselves, and then the glaze for the color of the light. 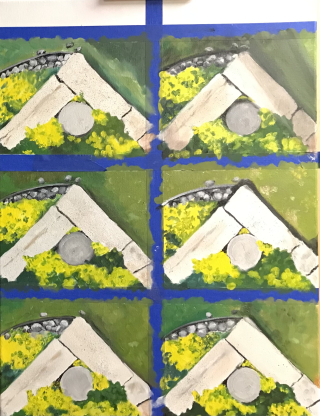 Gary noticed the two rocks on the bottom two frames had moved. I told him the rabbits moved them. In reality, I just got sloppy.

Posted at 08:48 AM in Miscellaneous Mockery | Permalink | Comments (0)

The annual fall cicadas emerged, lived, and died by the time I noticed. These aren’t the ones that go dormant for 17 years, or the ones that they used to make my old drug Gilenya, or the Zombie cicadas (or, as this article calls them, the flying salt shakers of death).

No, these are the stocky ones that you can pick up in your hand and “fly” around your husband’s head until he screams. 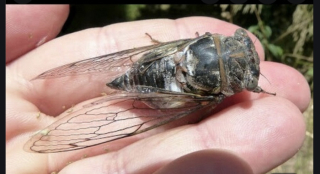 I have pulled this prank twice and it always satisfies. There’s something about cicadas, they are so substantial they don’t feel like an insect. But they look like monsters.

Posted at 08:34 AM in Miscellaneous Mockery | Permalink | Comments (0)

Check out the suggested news stories under the “For You” section in my iPad news feed. Notice a trend? 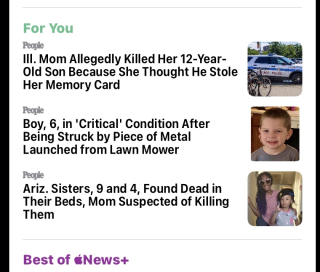 All from People Magazine.

I don’t believe I have read any news stories about dead kids recently, from People Magazine or not. Have I? If I did, they didn’t stick with me. Maybe this is a test to see if I’m a child killer.

Posted at 08:43 AM in Miscellaneous Mockery | Permalink | Comments (0)

I can’t tell you why.

No, it can’t be that last one — he gobbles up all those “Making of” documentaries. In fact, he has rediscovered his set of discs for Blade Runner with every damn version of Blade Runner ever made, and I finally convinced him to watch the “work print” with the commentary turned on.

I watched him for the twenty minutes that he could tolerate of the commentary and I’m fairly certain it’s the first reason. Not being the expert makes him very cranky. (See all posts in which he has to listen to doctors or use repairmen.) He already gets a little cranky when I go to IMDB and share details he doesn’t know.

I suppose when he’s watching a movie his imagination is stimulated and he makes up his own reasons and motivations (such as the “suicide” at the end of The Heiress). Then he’s confronted with what the director actually meant and it enrages him and he becomes Gary Godzilla, squashing  directors and smashing movie sets and rearranging them.

As it turns out, half of IMDB is transcribed director commentaries, so l’m good never seeing another. I’ll need to take some time to manipulate Gary into an expert position soon so he can get his expert fix in some constructive way.

The sports bra that I bought specifically for the sport of Making Zoom Calls has arrived.

This is how it was presented on Amazon. 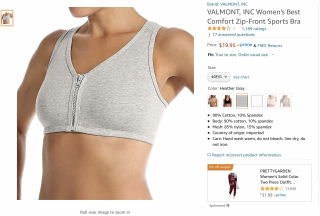 I don’t know what dainty sport that women is participating in that would require a bra for those chicken cutlets. Well, that’s not fair. Maybe she’s a marathon runner and any breasts would need some protection after 26.2 miles.

I anticipated my chest nonsense would look very different in the big girl’s version of this bra. 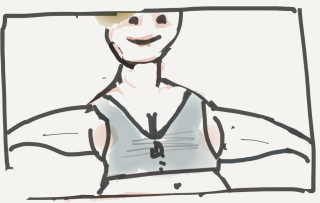 As it turns out, i am entirely covered and it is quite comfortable. It does make a uniBoob, but that’s to be expected. It’s also very easy to unzip when you want to be free and re-zip when the doorbell rings. Zip up, add a mask, fit for company.

If I wanted my blog to feel old, I would say, “You had a Nokia cell phone, and you are only five years younger than the war in Afghanistan.”

This blog is so old (how old is it (she said like an old person who remember Johnny Carson)) — it is so old it only had to look back five years for the first September 11 post: Where I was on September 11.

Two years later and seven years out I’d completely forgotten 25% of the catastrophe.

Ten years out I was struggling with the anniversary of Mom’s death too.

Last year I was struggling to believe anything.

And then this year I was watching the update of Memory Box, and Gary came in, looked at the burning towers, and said, “Wow, what is that?”

I gaped at him, and he pivoted to “Well, what I meant was ‘What are you watching?’”

I immediately made him recount where he was, and he was almost accurate (except he said he was still in bed, which is credible but not accurate).

The Applebee’s ‘Fancy Like’ commercial is getting the same airplay as “HEAD ON APPLY DIRECTLY TO THE FOREHEAD,” which is to say it appears at every commercial break.

Thankfully, HEAD ON didn’t have a catchy tune and a special dance.

This means that every commercial break I think, “You say ‘Bougie’ like it’s a good thing. Read your Marx and stop bragging about being bourgeois, you oppressors.”

Then I realized I am the bougiest of all, and I do like Applebee’s fajitas and applaud them for jumping on that viral marketing and bringing back the Oreo shake, and for beating out Wendy’s and Natural Light, and good for the songwriter for writing a song that panders to three massive  companies. I also like the lyrics and the tune. I just don’t want to hear it every 20 minutes.

But that was earlier this week. Evidently this commercial flamed out like a Bourbon Street Steak after a few days. Viewers hate it.

I can only assume this is planned and that soon we see the Wendy’s cut followed by the Natty cut.

Posted at 08:54 AM in Miscellaneous Mockery | Permalink | Comments (0)