Do you want to feel young? Then get with your husband and watch videos that your favorite band made ... what, ten, fifteen years ago? When they were skinny teenagers?

"Look at Ed!" Gary cried. "He's a baby!'  (He wasn't a baby. He was young and slight and shiny.) We danced on the basement floor and closed our eyes and pretended we were on a cruise.

I'm aware the band has a foothold on my pleasure neurons. I hear their music and feel happy and at peace. I didn't realize I had the option of watching their old videos and feeling young.

Remember how GrubHub forgot the hashbrown casserole from our order and I ended up getting an insane amount of food for free?

Since then all we want to eat is Cracker Barrel hashbrown casserole. Perhaps that is the business model: leave something out, play hard-to-get. Our desire overrode our liberal hatred of Cracker Barrel.  It even overrode Gary's past Cracker Barrel experience.  "At least they aren't sex traffickers," we rationalized. So we submitted a very hashbrown-centric order, and they did not forget the hashbrowns, therefore I give you:

Second, evidently this restaurant chain did not use the Typepad editor to make their menu. Typepad's spell-check keeps insisting Hashbrown is two words. I know, you are amused I pretend to care about spell-checks or proofreading. I will balance the scales by calling this restaurant "Crackerbarrel." 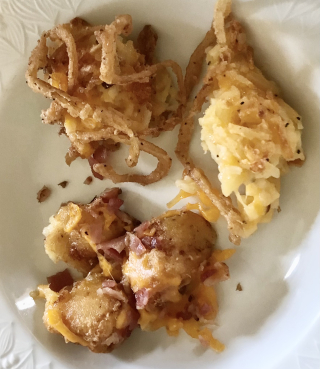 Regular Hashbrown Casserole -  Hashbrowns in which Crackerbarrel trades the crispy potato bits for some extra creamy white sauce. This is a devil's bargain. More on this later.

Loaded Hashbrown Casserole Tots - Crackerbarrel describes this as "Our Hashbrown Casserole fried into crispy bite-sized tater tots" and I call bullshit. You can see for yourself, they began life as tater tots, they taste nothing like the hashbrown casserole: the potato taste is entirely different.

Loaded Regular Hashbrown Casserole - Here they take the creamy casserole and add the crispy bits back in the form of deep-fried shoestring onions, the only possible upgrade from the crispy edges of hashbrowns. They also added cheese and bacon, and while green onions were also promised I could not see them. (I did not ask for a refund.)

Posted at 08:03 AM in Miscellaneous Mockery | Permalink | Comments (3)

A recent conversation with Gary.

[Stage direction: Gary has been coming in and out of the room to re-enact recent football plays and demand attention.]

Gary: "And then the quarterback - HEY STOP READING YOUR BOOK AND PAY ATTENTION!"

[Ellen dog-ears book to keep her place, and puts the book down and clasps her hands so she doesn't flip her husband off.]

Gary: "That's a big book. How are you going to keep your place?"

Gary: "YOU DOG-EAR YOUR BOOKS THAT IS AWFUL HERE LET ME GET YOU A BOOKMARK."

I may have asked before, but is this true? Does one not dog-ear books?

Rewriting the Novel: Who Said Writing is Rewriting?

Oh, it was Ernest Hemingway in A Moveable Feast. "The only kind of writing is rewriting."

Ernest Hemingway and everyone else quoted in this article.

I particularly like this one by Vladimir Nabokov: "I have rewritten -- often several times -- every word I have ever published. My pencils outlast their erasers."

I'm not even to the point of re-writing words, I'm re-doing the outline itself, because the rising action rose and fell and rose and fell and ... you get it. There was a conflict, and while it was realistic, it didn't build steadily.  When I finish revising a section of the outline I rewrite those chapters.

I bet this is the place when people give up. I am not giving up.

There was a brief time a few years back when Gary was in charge of the food. He took over the kitchen, added an entirely superfluous knife block, bought a "palette" of all the spices, reorganized the drawers and banished my cunning shiny tools to the back of a drawer, then put our ugliest spatulas and big spoons out in the counter in a controversial Spinny Thing.

He hasn't touched any of those tools and spices for a year. I bided my time, and advised him that I would be reclaiming my kitchen. (I did look for a tea towel that said ELLEN'S KITCHEN in big block letters, but I backed off. Too pointed.)

Last weekend, the big basket of herbs were sorted and consolidated, and the ones I use moved out of the basket and organized in the pantry. Knife block was demoted to basement, as were the bulky baskets and milk frother and especially the Spinny Thing.

Gary was gracious enough to say it looks like a good system.

Remember when I bought my Kinsa crowdsourcing thermometer it came with this Nurse Blake  character, who might have been a bot?

A new email has arrived and, big news, there's a Mr. Nurse Blake, and he has Covid. There's a link in the email teasing the story, then you take a link from that second page to the details. I think this is all a ploy to see the depth of our relationships to Nurse Blake.

Upon reading the article I realized Nurse Blake might benefit from my neighbor's experience: her husband and child got the Omicron while being fully vaccinated and boosted and masked. Luckily, with the Omicron we decided to stop being in the same room, we now holler from one back door to another.

(And yet, amid all this caution, the Supreme Court has decided that no one is their brother's keeper, and we shall have no mask or vaccine mandates.)

Interesting to me that my new bestie Blake would be out there sharing her experience, and that it would not be followed by a disclaimer like "the opinions of Nurse Blake are her own and are not shared by the management."

A friend has been posting on Facebook a number of floral photos. This one appeals to me: 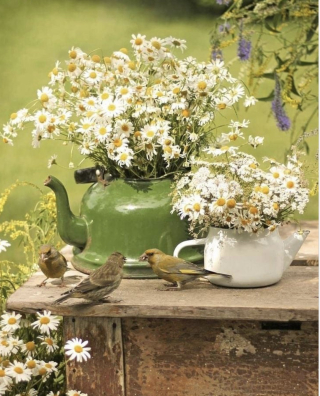 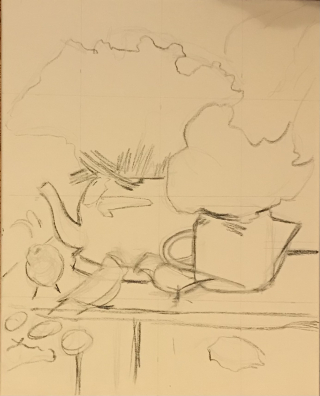 Need to do that white pitcher again, don't I. And the green pitcher spout.

It's a lot like the last one, but I like the idea of reinforcing the next few weeks.

Posted at 08:02 AM in Miscellaneous Mockery | Permalink | Comments (2)

I looked at a recent video of a fox in the backyard, and I thought, damn, our fox got fat. Like, carrying an extra ten pounds of Christmas weight. I almost didn't recognize him.

On further review, though, this appears to be average weight for a red fox (below). I think I've just seen very hungry red foxes so far. 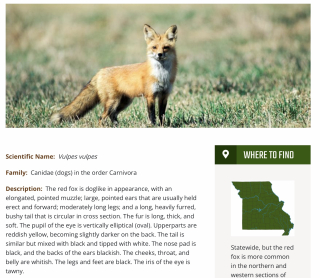 The next night, I saw another fox I didn't even recognize as a fox at all. This guy below is a grey fox. 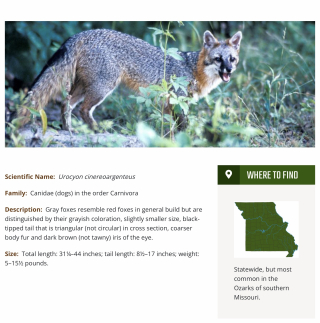 Gary researched the grey fox and claims it can climb trees like a cat. I don't know how to make that happen.

Posted at 08:46 AM in Miscellaneous Mockery | Permalink | Comments (0)

MSNBC teased me with this news and then never delivered. I had to hunt this down.

"Moderately to severely immunocompromised people can get another shot if it's been at least five months since their last one."

Per the CDC site:

Who Is Moderately or Severely Immunocompromised?

People are considered to be moderately or severely immunocompromised if they have:

(Counts on fingers) January 17 is my five-month mark.

Rewriting the Novel: The Horrifying Realization That It Is Crap

Well, that's an exaggeration. But yes, I did another even more objective analysis of the first draft and thought many thoughts. There was a lot of "What the hell was I thinking?" and even more "This all has to be gutted and done over,"  but still a fair amount of  "I can keep this if I whittle it down to a paragraph."

Strangely, parts that I thought were bizarre (winging tortillas off the church roof) fit in perfectly now that I can stand back and look at the themes that emerged. In fact, the tortillas show up at the very end, that's how important they are.

I am willing to bet I rewrite the whole thing. That's what I'm doing now with the first chapter.

Gary's been complaining that the road to the SuperBowl has been chaotic this year because of Covid. A team headed to the SuperBowl will find half  the team is out with Covid. Chaos ensues and no doubt digs in to the pockets of the NFL, the players, the gamblers, et al.

If I were an NFL coach, I would find a way to pump Covid air into the locker room of the opposing team, or infect the waiters at the team hotel. Or give the player's relative's Covid so they're distracted, like the case of the Texas Cheerleader's mom.

With the money at stake I really suspect that's happening.

Posted at 08:14 AM in Miscellaneous Mockery | Permalink | Comments (0)

A Message to the Community from the Big Hospital System

Last week we ALL got this remarkable email from the big hospital system, Barnes-Jewish-Christian.

It was titled Message to the Community from BJC HealthCare and Washington University and I paraphrase it below.

Blah blah, we have important information to tell you
If You're Not Yet Vaccinated, It's Not Too Late

[Five bullets that say "Get a Vaccine!" in various ways.]

We Can Pull Through This Together
[Another bullet that says "Get a Vaccine" plus wash your hands, wear a mask, keep away from people.]
==================
First off, wow, some serious baby-pandering there.
Second, this email went out to people who gave their email address to a doctor. I'm pretty sure the anti-vax people don't visit doctors much less give out their email.

Third, I think this means that I am not getting my thyroid test next month.

Posted at 08:21 AM in Miscellaneous Mockery | Permalink | Comments (0)

I hate that feeling of mindless eating, when you consume food and don't enjoy it. I was dismayed that I two days ago I evidently ate half a slice of American cheese and did not remember it. At all. Then I found it sitting on the earbud box. I'm telling myself the colors matched, only they did not. 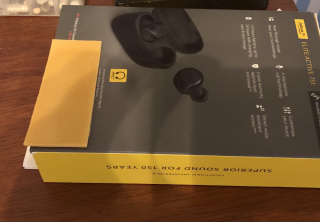 This week the Ball pitcher went from this: 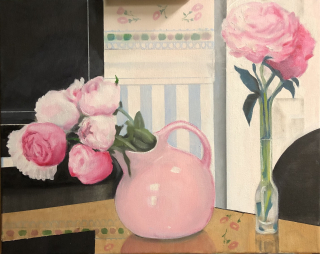 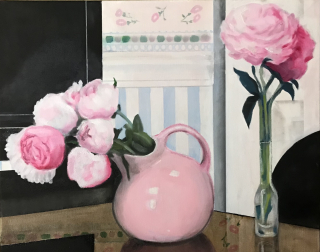 ... when it was originally this: 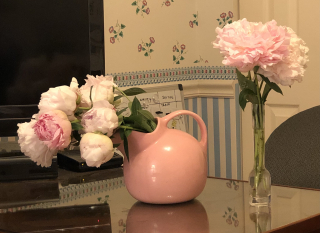 Posted at 08:10 AM in Miscellaneous Mockery | Permalink | Comments (2)

Now that I've let the book sit for a month, I am rediscovering things I'd forgotten. Evidently one night I woke up  and typed, "Add a part where there is a dog named Miss Darcy and Maggie thinks it's an actual person but it isn't it's a dog."

I will not be adding that part. Darcy. Seriously, how on the nose.

It was interesting to review what I had with a critical eye. I haven't done that since my college Literary Criticism course, when I'd skim a book, dog-ear the pages that seemed to follow a pattern, and then slap up an essay. This time I was the author and I was surprised to find patterns and themes I didn't deliberately intend. Man vs nature is in there. (I'm a little disappointed I didn't find a Christ figure in there too.)

Unfortunately, the critical eye led to the critical brain saying things like, "Oh this entire first act needs to be completely rewritten."  That was followed by a fun spurt of creativity, but if this continues I will finish draft two, let it sit, look at it with a critical eye, get creative, and then I'll be stuck in a cycle until the end of my days.